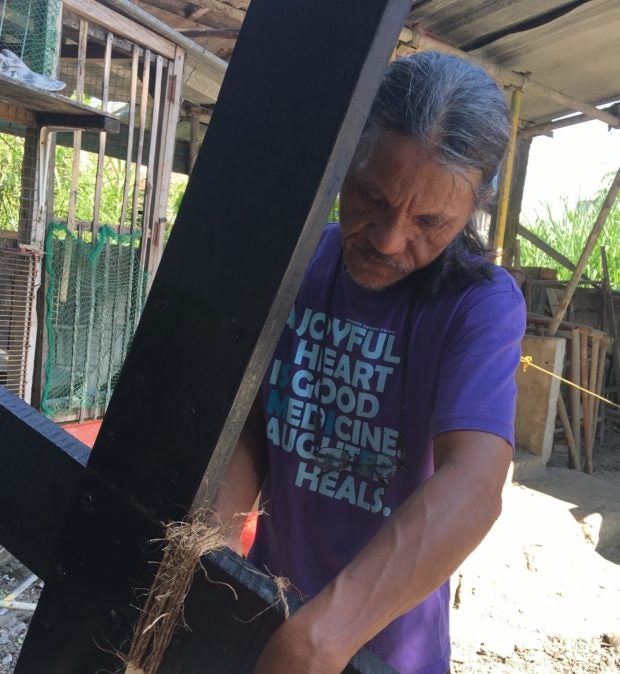 BLOODY VOW House and billboard painter Ruben Enaje skips his annual vow of being nailed to the cross on Good Friday in the City of San Fernando in Pampanga as the government bans mass gatherings to halt the spread of COVID-19. —PHOTO BY TONETTE OREJAS

CITY OF SAN FERNANDO, Pampanga, Philippines — Like last year, Ruben Enaje has canceled his “panata” (vow) to be nailed to the cross for the 35th time as part of the local version of Calvary in this Pampanga capital on Good Friday.

Enaje, a carpenter, has been spending his time painting billboards at Barangay San Nicolas in Arayat town to earn.

“Alang papaku ngeni Cutud uli na ning virus (No one would be nailed to the cross in Barangay San Pedro Cutud because gathering a big crowd may spread COVID-19),” Enaje told the Inquirer in a phone interview on Tuesday.

His two pairs of steel nails will remain unused, soaked in alcohol inside a glass bottle.

The 33 times Enaje had himself crucified made him, so far, the longest Filipino practitioner of a painful Lenten tradition, which is not condoned by the Catholic Church.

Pampanga was placed under a modified general community quarantine from April 1 to April 30.As of March 28, the provincial health office recorded 60 new cases, raising the active cases to 1,300. At least 7,712 people have recovered from the infection but 479 people had died.

In refraining from reenacting the punishment rendered on Jesus Christ, Enaje is also forced to stop carrying a 37-kilogram wooden cross when he acts out the same role in a street performance of Via Crucis (Way of the Cross).

To “fill up for the sadness” from his failure to perform his annual real-life crucifixion, Enaje, a 60-year-old house painter, is visiting a hill, made from Mt. Pinatubo’s lahar, in Purok Cuatro at 6 a.m. on Good Friday to pray.

The village’s chieftain, Remegio de la Cruz, had the hill cleared and raised there the three wooden crosses used in the play to give residents a wider place to pray while observing physical distancing.

De la Cruz also prohibited “mandarame” (flagellants), who whipped their backs until these were oozing with blood, from doing the rite.

Flagellation and crucifixion here used to draw as much as 50,000 pilgrims and spectators before the pandemic.

De la Cruz said Cutud would be off-limits to nonresidents on Good Friday because he would block all entries to the village and set up checkpoints.

Enaje took to the cross in 1986 as a way of thanking God for surviving a fall from a three-story building in Tarlac province without any scratch or internal bleeding in 1985.

After completing his 27-year vow, Enaje extended the sacrifice and felt like it was a welcome burden that he would bear for the “sake of the community.”

He urged visitors to come as pilgrims, pointing out that the Cutud crucifixion and street play were not spectacles but “expressions of faith.”