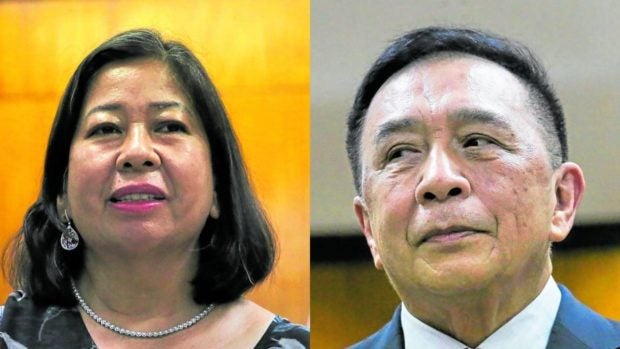 MANILA, Philippines — A dispute over who should grant exemptions to the gun ban has caused a split in the Commission on Elections (Comelec) after the head of its committee in charge of poll security resigned on Tuesday in protest against a resolution that essentially stripped her panel of that responsibility.

Giving exemptions to the gun ban during elections has always been the task of the committee on the ban on firearms and security concerns (CBFSC), which for the May 9 polls was headed by Commissioner Socorro Inting.

In an April 12 memorandum to the other members of the poll body that was leaked to the press late on Tuesday, Inting said her position as chair of the committee became useless because of the authority given to Pangarungan.

It is CBFSC’s responsibility to screen all applications for gun ban exemption.

The gun ban, which started on Jan. 9 and will be in effect until June 8, is seen as a way to reduce if not eliminate election violence for which the Philippines has been notorious.

Inting, Ferolino and Casquejo participated in the meeting via video link. Pangarungan and Commissioners George Garcia, Aimee Neri and Rey Bulay attended the meeting in person.

The resolution granted automatic gun ban exemptions to senior government officials along with two security aides each, as well as officers of the National Bureau of Investigation and the Comelec.

In a news conference on Monday, Pangarungan said he would exercise his unilateral power only in “urgent and meritorious” cases.

In her memo, Inting said giving the authority to grant gun ban exemptions and place areas under Comelec control to Pangarungan “based on the vague and arbitrary phrase of ‘meritorious and urgent cases’ essentially rendered futile or pointless the existence and functions of the CBFSC.”

In a statement after their Wednesday meeting, Pangarungan said he “welcome[d] the differing opinions and stances of my colleagues.”

He said he respected “the valuable work done by all our commissioners, especially by Commissioner Inting in the CBFSC” and the other committees helping ensure an honest, peaceful and credible elections.

“We are professionals and we will continue to work toward a common goal,” he said.

Pangarungan said he had not yet used his authority to place an area under Comelec control, but did not say the same about his power to grant gun ban exemptions.

Sought for comment, Malacañang said it respected the independence of Comelec as a constitutional body.

“We further believe that any internal disagreement among its commissioners will be resolved amicably and professionally and will not affect the integrity of the May 2022 elections,” acting presidential spokesperson Martin Andanar said in a statement.

Former poll Commissioner Rene Sarmiento supported Inting’s move and said the delicate role played by the CBFSC should not be performed by one person.

“Is it not that if a position is absolutely given to one man, so, it can extend favoritism or show favoritism between one over the other? It can sweepingly issue, well, exemptions, without check and balance,” he said, adding that there was “no more check and balance” under the new arrangement.

When he was in Comelec from 2006 to 2013, Sarmiento said the gun ban committee had consultants from the Philippine National Police and other sectors concerned with “helping and guiding” the decision of the Comelec in granting exemptions.

The committee serves as the “check and balance” before gun ban exemptions are granted, he said.

“That’s why it’s a collegial body,” Sarmiento said. “The purpose of the committee on gun ban was to know the collective wisdom of each commissioner.”

The senior officials automatically exempted from the gun ban include the President and Vice President; Senate President and senators; House Speaker and representatives; Chief Justice and justices of the Supreme Court, Court of Appeals, Sandiganbayan, and the Court of Tax Appeals; and trial court judges.

The PNP reported that 2,385 people, mostly civilians, had been arrested for violating the gun ban and 1,833 firearms had been confiscated as of April 7.

—WITH REPORTS FROM DEMPSEY REYES, NESTOR CORRALES AND INQUIRER RESEARCH