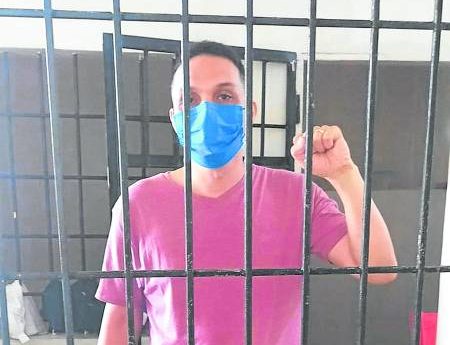 CAGAYAN DE ORO CITY, Misamis Oriental, Philippines — The leadership of the Iglesia Filipina Independiente (IFI) and the family of activist Aldeem Yañez have demanded his immediate release following his arrest on Sunday.

Yañez, a volunteer staff and member of the IFI (Aglipayan Church), was arrested at his house in Barangay Iponan here on Sunday during a raid by the military and police, according to IFI Supreme Bishop Rhee Timbang in a statement.

“We condemn the arrest of Mr. Aldeem Yañez … and denounce its illegality,” said Timbang. “He was apprehended at 3 a.m. as his home was raided by combined police and military elements. He is now detained at Camp Evangelista in Patag here on trumped-up charges of illegal possession of firearms.”

Yañez was among those implicated in a 2018 New People’s Army (NPA) offensive in Sibagat, Agusan del Sur, in which rebels burned an Army patrol base, carted away weapons and abducted a government militia member.

In December last year, he was among 17 activists whose “trumped-up” cases of “destructive arson, kidnapping and robbery with violence against or intimidation of persons” were dismissed by the Bayugan City Regional Trial Court (RTC) Branch 7.

Judge Fernando Fudalan quashed the charges since the warrants against them did not contain specific identifying information, such as occupation, appearance and exact place of residence.

But in a statement released on Monday, Maj. Gen. Wilbur Mamawag, commander of the Army’s 4th Infantry Division, said Yañez was arrested for violation of Republic Act No. 10591, or the Comprehensive Firearms and Ammunition Regulation Act. Mamawag said the raid was conducted on the strength of a search warrant issued by a local court on April 6.

Mamawag also accused Yañez of conducting “ideological, political and organizational works” in Saldav and Pantaron Range complex in Bukidnon province and carrying out “extortion” activities in the urban areas of Misamis Oriental and Bukidnon.

But IFI priest Chris Ablon said the allegation against Yañez was unbelievable.

“We in the IFI leadership decry this grave abuse of police and military power and the cooptation of the civil courts,” Timbang said. “We root this in the tyrannical rule of the present dispensation which has no regard and respect for the law, human rights, social justice and human dignity.”

“As expression of his ministry, he served as volunteer staff of Visayas Mindanao Regional Office for Development, a development program of the IFI and of the Philippine Ecumenical Peace Platform (PEPP), a network of peace advocates in the country, seeking … the resumption of peace talks between the government and the National Democratic Front of the Philippines,” he said.

Timbang condemned Yañez’s illegal arrest and detention, and called for a stop to Red-tagging. “Stop church persecution. We call for the resumption of peace talks,” the IFI bishop said.

“My brother is an activist if the word is to be defined as a person who sees the misery of his people, who hears the cry of the poor, who is concerned about their sufferings, and journey with them in the path towards emancipation. He is not a terrorist,” Redeemer said.

Yañez served as vice chair of the National Council of Churches in the Philippines and at the time of his arrest was a volunteer of the PEPP.

—WITH A REPORT FROM DIVINA M. SUSON