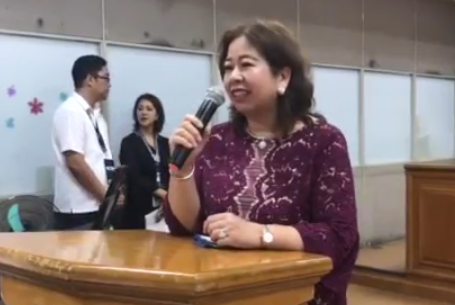 MANILA, Philippines — Commissioner Socorro Inting resigned on Tuesday as chair of the Committee on the Ban on Firearms and Safety Concerns (CBFSC) of the Commission on Elections (Comelec).

Inting resigned a day after the 4-3 vote of the Comelec giving Chair Saidamen Pangarungan the power solely to grant gun ban exemptions and to place under the control of the commission so-called areas of concern.

The gun ban will last until June 8, which is also the end of the election period.

“The bestowal on the Chairman of the Commission on the power to grant gun ban exemptions and place Election Areas of Concern under Comelec Control based on the vague and arbitrary phrase of ‘meritorious and urgent cases’ essentially rendered futile or pointless the functions of the CBFSC,” Inting said in a memorandum dated Tuesday.

“In protest, I hereby irrevocably resign as CBFSC chairperson effective immediately,” she added.

When asked for a statement, Inting said in a text message to reporters: “I will maintain a dignified silence. My resignation is a passive protest.”