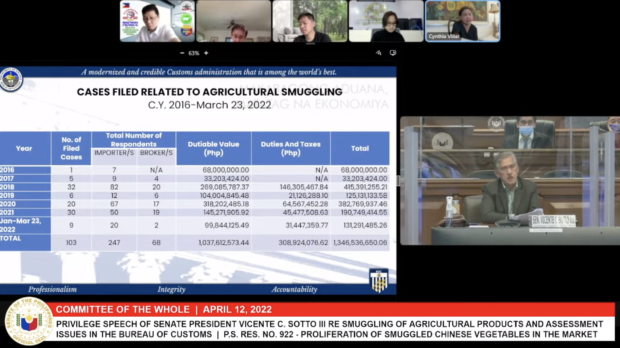 A chart showing the number of cases that have been filed since 2016 in relation to agricultural smuggling. This was presented during a hearing of the Senate Committee of the Whole on Tuesday, April 12, 2022. (Senate video screengrab)

MANILA, Philippines —  Since 2016, why has there been no accused smuggler convicted and imprisoned?

Both Senate President Vicente Sotto III and Sen. Cynthia Villar wondered about that on Tuesday as the Senate resumed its agricultural smuggling investigation.

Sotto, who is leading the hearing as chairman of the Senate Committee of the Whole, expressed dismay over the “zero conviction rate” among suspected smugglers.

“So, we can go on record. From 2016, up to the present day, have we imprisoned any person — either importer or broker, or whoever —who you have sued for large-scale agricultural smuggling as mentioned in the law mentioned by Sen. [Cynthia] Villar?” Sotto asked, speaking in a mix of English and Filipino.

Earlier, Villar also questioned why she had not heard of any smugglers being imprisoned “considering the huge volume of agricultural products that are being intercepted.”

She pointed out that under the law it would be considered as economic sabotage to smuggle P10 million worth of rice and P1 million worth of other agricultural — products such as sugar, corn, pork, poultry, garlic, onion, carrots, fish, and cruciferous vegetables.

That, she added, is a non-bailable offense.

Senior Assistant State Prosecutor Charlie Guhit, who represented the Department of Justice at Tuesday’s hearing, told senators that some of the cases were still pending — either for reinvestigation or arraignment.

“Right now, it’s early to say that they will not be imprisoned because we have to wait for the prosecution of the case to be over and the ruling of the court,” Guhit said.

“Based on our data, with respect to the reported cases, some of which are still pending reinvestigation and some are for arraignment…But based on our data now, no accused is incarcerated,” he added.

Sotto described this as “very frustrating.”

“Not even one? It has been almost six years. And so many have been caught. It means so many have escaped. It’s just like in drugs: They will let 100 kilograms get seized, but 1,000 kilograms will get through. Could it be like that, attorney?” Sotto said.

In response, Guhit said: “Based on our data, there are no convictions.”

He repeated that many of the cases were still pending.

Retaining DA chief will be next admin’s ‘biggest mistake’ – Sotto