Online impunity: Assault on Robredo daughter just one of countless against women in PH 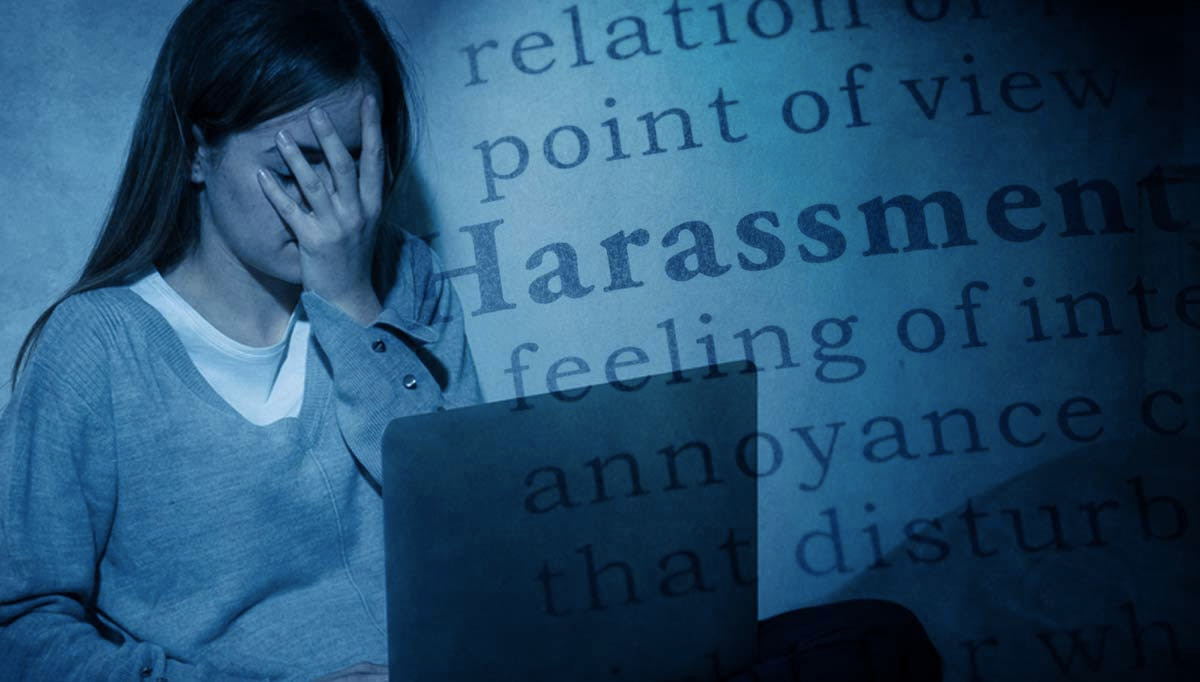 MANILA, Philippines—The eldest daughter of Vice President Leni Robredo, Aika, who was in Mandaluyong City on Sunday for the door-to-door campaign #TaoSaTaoParaKayRobredo, became the latest victim of the viciousness and deception that social media platforms give outlet to.

Last Monday, links to fake videos, supposedly showing Aika, 34 years old, spread on the internet with screenshots of Google search results showing the fake videos had been shared on Facebook and Twitter, two social media platforms that are allowing themselves to be outlets of falsehoods and misinformation.

The social media assault was condemned by lawyer Barry Gutierez, the Vice President’s spokesperson, who said it was a “direct and vile” form of propaganda to counter the progress in the election campaign of Robredo, who is running for president, and her running mate, Sen. Francis “Kiko” Pangilinan.

Gutierez said the leaked videos were a “malicious fabrication” and that the Vice President’s office had already asked Google to take these down. The lawyers, he said, was likely to take legal action.

The women’s rights group Gabriela said it had no doubt that the attack on Aika was “politically motivated” since Robredo’s chance of winning the presidential race was on a “steady rise” and she had become the biggest target of disinformation.

Tsek. PH, a fact-checking initiative, revealed on Feb. 25 that out of the fake or misleading content about Robredo online, 94 percent were negative while all of the content about Pangilinan were entirely negative.

She told INQUIRER.net that when you have a “serial misogynist” President, who has practically made it routine to demean women, violence in all its forms against women has been “normalized.”

“Then others follow, employing the same method of using lies and sexism, because they think it is normal, just appropriate and that they can get away with it anyway like the President seems to always do,” Salvador said.

In 2016, barely warming up to his seat, Duterte escalated his attacks on his most bitter and vocal critic, Sen. Leila de Lima, by making public claims about her new boyfriend and the supposed existence of a sex video involving the senator.

De Lima and her driver, Ronnie Dayan, who had admitted having a relationship with the senator, had denied the existence of a sex video involving them. De Lima said “that so-called sex video is always brought up” when she raises the issue of extrajudicial killings against Duterte.

De Lima, quickly after Duterte became president, has been charged with alleged conspiracy to smuggle drugs from prison and arrested and detained in 2017. She remains in detention at Camp Crame, the Philippine National Police headquarters in Quezon City.

When De Lima criticized Duterte for kissing a married overseas Filipino worker in Seoul, the President’s reaction was vehement, saying De Lima had no moral authority to criticize his action and threatening to release the sex video supposedly showing De Lima. “If there’s a screen here, I’ll show you her X-rated,” Duterte said then.

For Gabriela, people should rise against this “rotten brand of politics” which demeans women when there are elections to divert people’s attention from issues that should be highlighted instead. 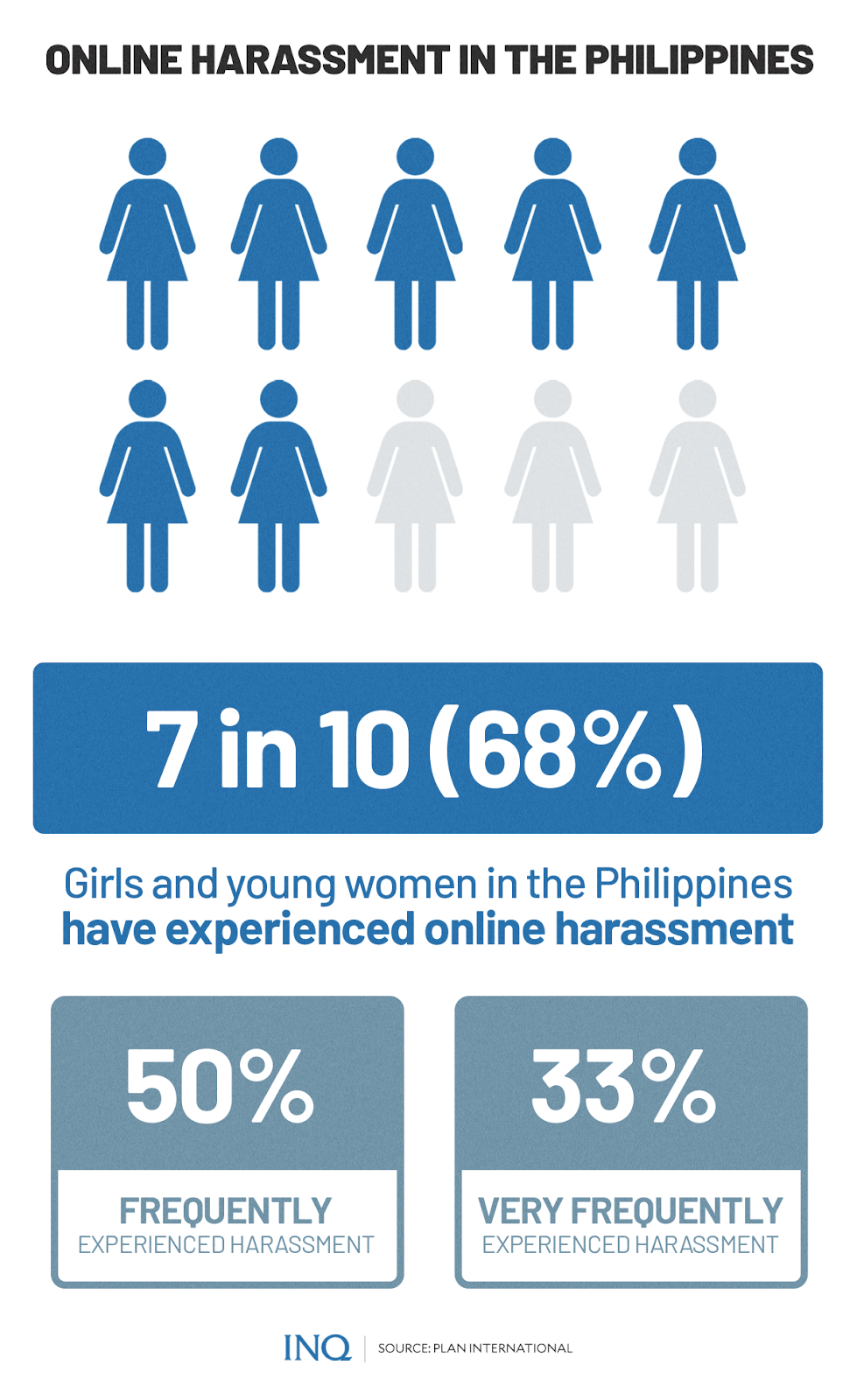 Sen. Risa Hontiveros said in 2018 that Duterte’s words “normalized and reinforced” the climate of sexism and violence against women, stressing that her office had documented 23 instances when Duterte made remarks against women.

“Similar to how the President’s words inspired and encouraged the wave of killings in the country, his anti-women statements have propelled unprecedented attacks against women,” she said.

In 2016, Duterte made fun of a case where an Australian missionary was raped, saying, “Did I become mad because of the rape? Yes, that’s one. But, she was so beautiful, the mayor should have been first. What a waste.”

Duterte said in 2016 that he and Finance Secretary Carlos Dominguez once stared at Robredo’s knees while in a Cabinet meeting: “You know ma’am Leni would always wear skirts which are shorter than usual.”

In 2018, Duterte told the military to shoot female New People’s Army combatants in the vagina: “There’s a new order coming from the mayor, ‘We will not kill you. We will just shoot you in the vagina’.”

Duterte said in 2018 that when he was in high school, he molested his family’s maid: “I went to the room of the maid […] I lifted the blanket […] I tried to touch what was inside the panty.”

This, as Hontiveros said, two women get harassed everyday in Manila—in a week, there are 14 women harassed. “If we multiply that to months and even an entire year, we will have a very alarming and nightmarish statistic,” she said.

According to a Plan International study in 2020, seven in 10, or 68 percent, of girls and young women in the Philippines have experienced online harassment, especially on social media.

Most of them likewise revealed that the harassment happens frequently (50 percent) while some said very frequently (33 percent), the study “Free to be online? Girls’ and young women’s experiences of online harassment” stated.

Plan International said eight out of 10, or 79 percent, revealed that “they or girls they know” have received threats of sexual violence on social media, while 67 percent was harassed by people they know.

“The high incidence of online violence against girls and young women is alarming. In this global pandemic and in an increasingly digital world, girls are more at risk than ever,” it said. 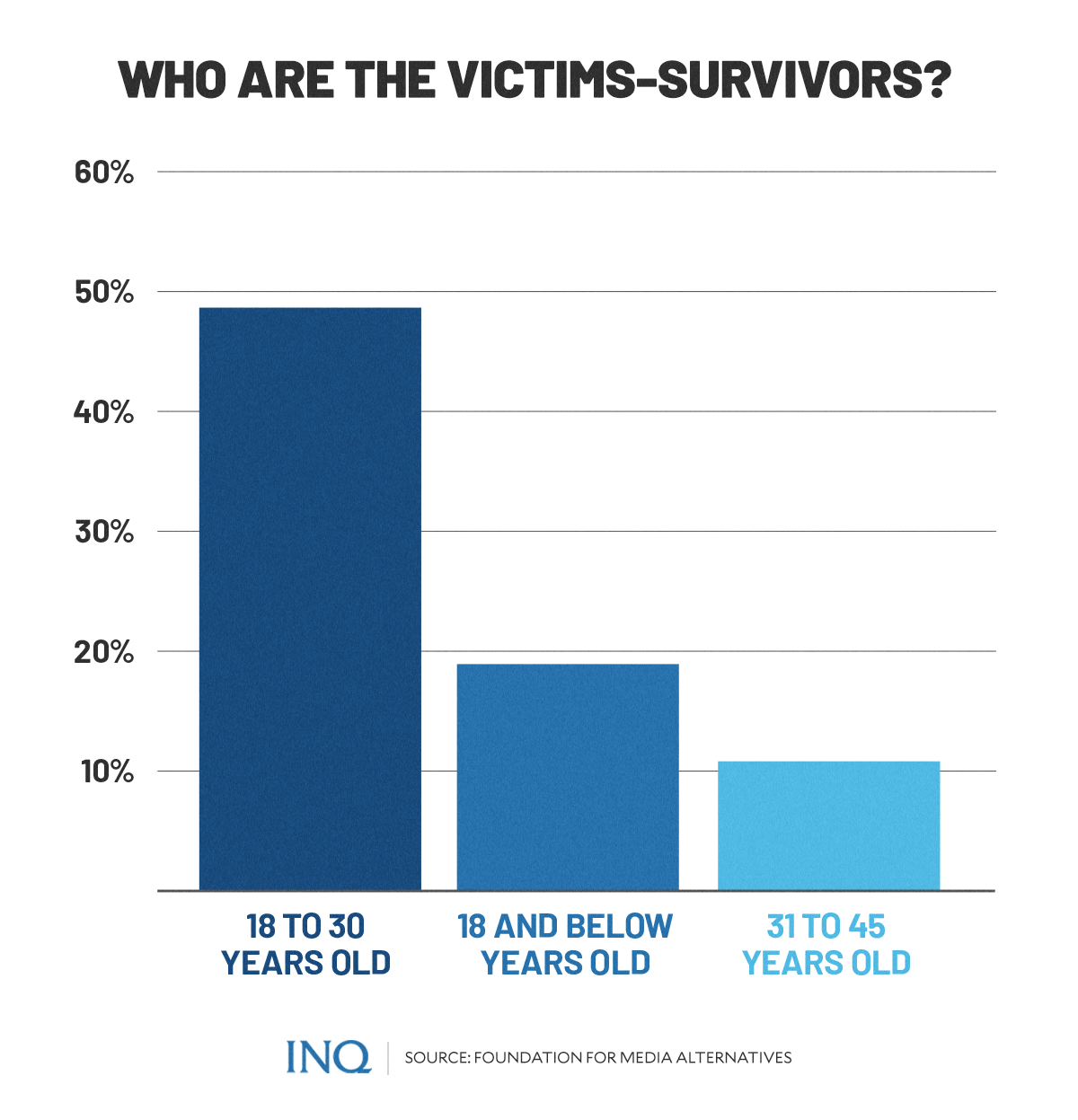 Likewise, the United Nations Children’s Fund (Unicef) said the Department of Justice–Office of Cybercrime saw an exponential rise in cyber tip reports for the Philippines to 2.8 million in 2021 from 1.2 million in 2020.

Some 131 children were even rescued and 16 perpetrators arrested from the 49 operations conducted from January to August 2021, according to the Philippine Internet Crimes Against Children Center.

The Social Weather Stations said 88 percent of women who are 18 to 24 years old have experienced sexual harassment at least once in their lifetime, like lascivious language, indecent gestures, and cyberviolence.

Last year, the Foundation for Media Alternatives (FMA) said there were 37 media-sourced reports of online gender-based violence (OGBV) from Jan. 1 to June 23, 2021. 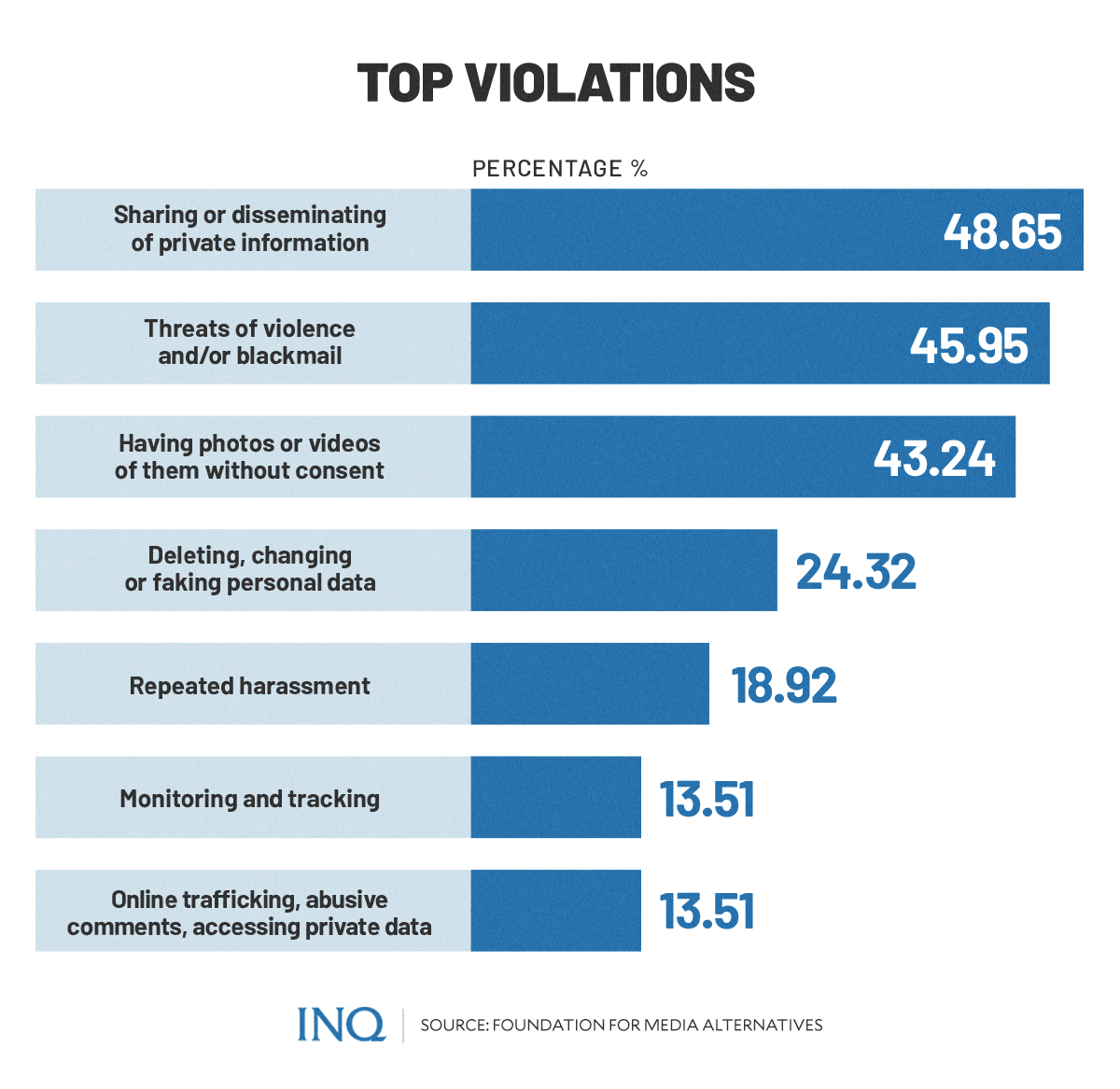 While FMA said the reports were 41.18 percent less than the cases over the same period in 2020, OGBV “still remains and cripples Filipino women and girls’ freedoms in offline and online spaces”:

Plan International said falling victim to online violence has been limiting women’s freedom of expression, driving them out of digital spaces, and leaving them emotionally stressed.

“Online violence is disempowering girls. They’re being shut out of a space that plays an important part in fulfilling their potential to thrive and become leaders,” Plan International said.

For Robredo, the “best antidote against fake news is the truth,” saying that “let us not lose focus, let us continue doing good. This was how I survived the last six years.” 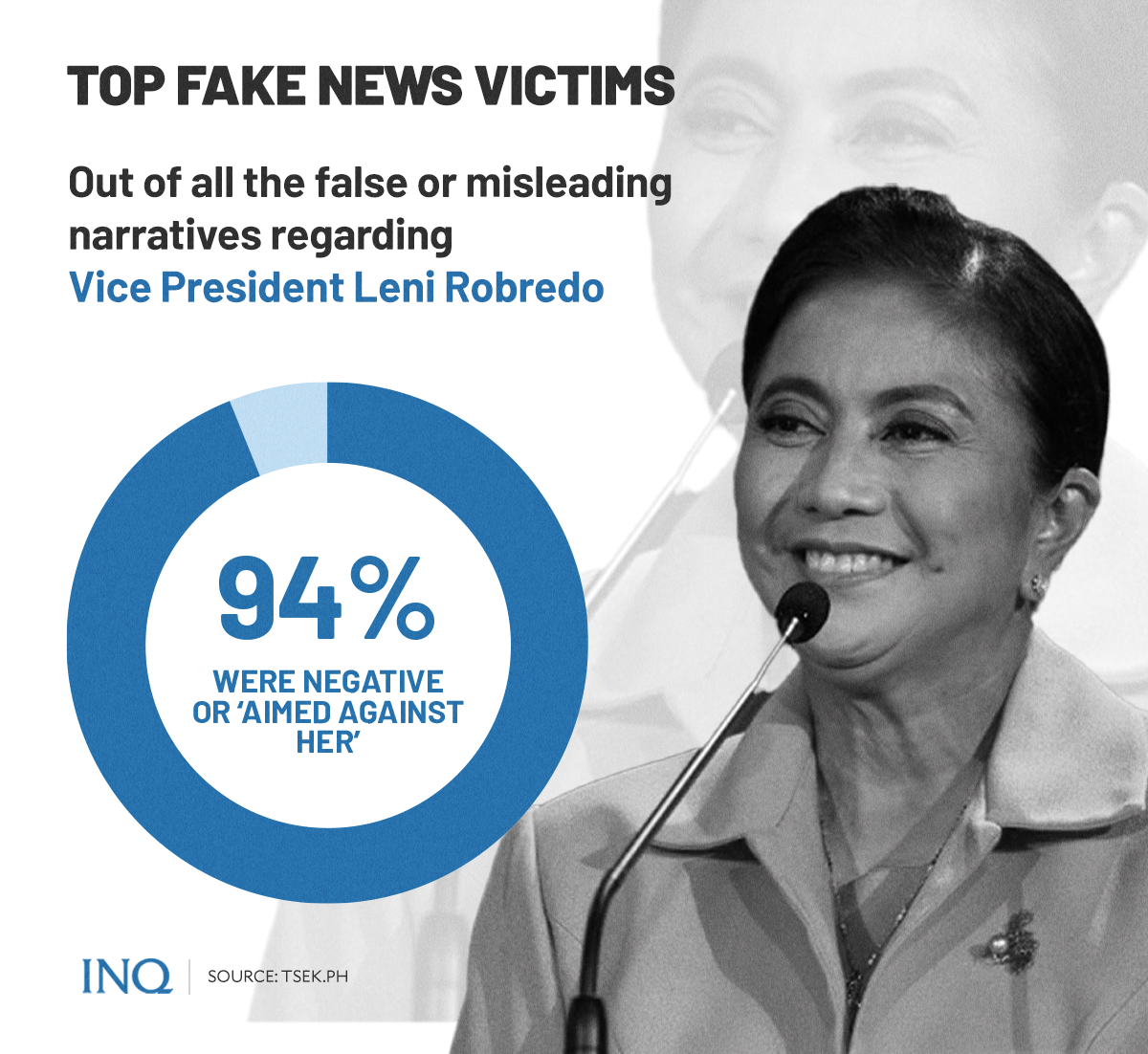 In 2019, the President signed Republic Act No. 11311—or the Safe Spaces Act. The law outlined harassment in streets, online, government offices, workplaces and educational institutions.