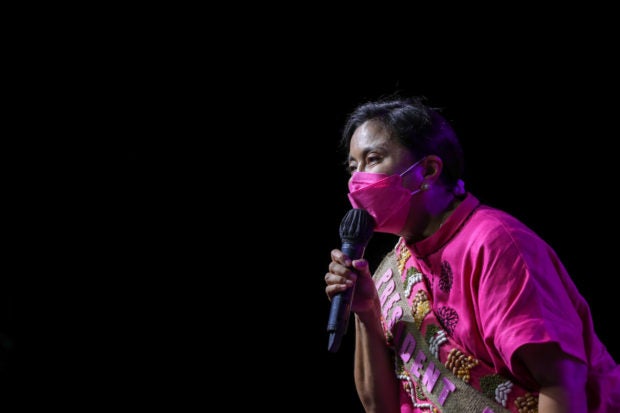 Young people who have access to information should help parry the lies unleashed by those who want to win the 2022 elections through disinformation, Vice President Leni Robredo said, as she exhorted the “digital natives” to lead the charge against fake news.

In a political rally in Naval, Biliran, Robredo noted how malicious actors have been “twisting her words to deceive people and make it appear that she doesn’t have a clear program for Filipinos.”

Robredo was alluding to viral posts where her statement about upskilling maritime workers was twisted to make it appear as if she believed the industry isn’t skilled enough.

In reality, seafarer programs are among her flagship programs outlined in her Angat Buhay agenda declared as early as October.

“The maritime industry is one of the first things I’ve vowed to prioritize, including our seamen, but because of fake news, they chopped up my statement to convey the opposite of what I said,” she said.

While Robredo herself has started aggressively pushing back on fake news — even posting false claims on her own Facebook profile to debunk them—she called on the youth not only to vote for her, but to put their knowledge to good use and combat disinformation on social media.

She also thanked those who have slowly started to push back against efforts to malign her through disinformation.

On Saturday, the student governments of six of eight schools under the University Athletic Association of the Philippines (UAAP) said they were endorsing Robredo and her running mate, Sen. Francis Pangilinan, for the country’s top two posts.

As for the remaining two schools: De La Salle University has yet to finish its mock poll; and the University of the East has only endorsed Robredo as it was not yet done with its vice presidential poll.