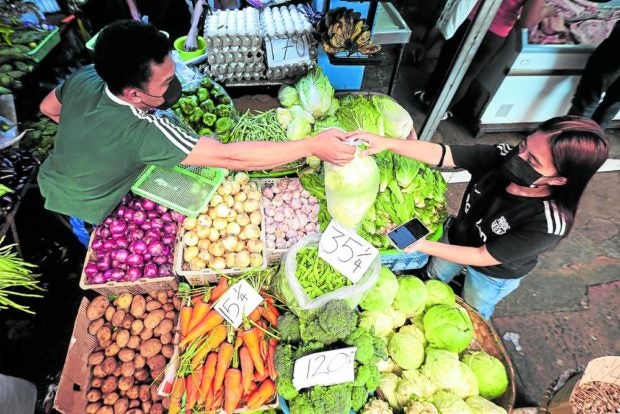 Farmers, particularly those in Northern Luzon, have been complaining of the entry of smuggled vegetables. (FILE PHOTO)

MANILA, Philippines — Senators on Tuesday revealed the names of four alleged big-time smugglers of agricultural products, but they failed in pressuring agriculture officials to disclose the names of their supposed protectors responsible for emboldening the “brazen” display of their illegal activities.

During the third committee-of-the-whole hearing on agricultural smuggling, Senate President Vicente Sotto III said he had obtained a dossier from the intelligence units of the Department of Agriculture (DA) and the Department of Trade and Industry (DTI) naming Manuel Tan, Andrew Chang, and Luz Cruz as alleged vegetable smugglers.

Also on Sotto’s list was a handwritten name of Mayor Democrito “Jun” Diamante of Tuburan town in Cebu province as an alleged smuggler of agri-fishery products.

According to Sotto, Tan supposedly operates in the ports of Subic in Zambales, Cagayan de Oro and Batangas, while Chang purportedly does business in Subic and Batangas ports, the Manila International Container Port (MICP) and at the Port of Manila.

Cruz, tagged as “Onion Queen,” also operates in the ports of Subic, MICP, and CDO, while Diamante allegedly operates at the CDO port.

Diamante was tagged by Sen. Panfilo Lacson in a 2017 exposé of alleged bribery of Bureau of Customs (BOC) officials under the agency’s “tara” or payola system.

Sen. Cynthia Villar, chair of the committee on agriculture and food, manifested her dismay that Cruz had been identified as an alleged onion smuggler as early as 2014, and yet managed to resume her activities until today.

“So it appears that her blacklisting has not accomplished anything,” she said.

The names the Senate President disclosed were confirmed by Edsel Batalla, director of the National Intelligence Coordinating Agency (Nica), as among those that they were investigating for their alleged involvement in the smuggling of agricultural products.

According to the Nica head, the four named by Sotto were among the more than 20 personalities — suspected smugglers and their protectors — who they were probing, but repeatedly clarified that these were still “under validation.”

“As to the list of players, smugglers that are allegedly enjoying protection from the DA and BOC officials, we do have a list,” Batalla said.

Upon Sotto’s prodding, Batalla assured the committee that he would submit a copy of the Nica’s list of the main players in the agricultural smuggling racket, but only after securing clearance from his superiors.

At Tuesday’s hearing, senators confronted Laciste on why his list no longer contained names of politicians, contrary to what he told a group of Benguet vegetable traders and confirmed to the committee in a previous hearing.

Laciste backpedaled from his earlier statement that influential personalities and politicians, including a congressman, had been calling him to shelve cases against suspected smugglers of agricultural products.

“I only said that to appease Miss Agot over her fears for her life, that I, too, have been receiving calls from influential people,” he said, referring to Agot Balanoy, spokesperson for the League of Associations at the La Trinidad Vegetable Trading Areas in Benguet.

Laciste did not identify his callers, who, he claimed, have supposedly been “merely dropping names” of their backers.

Sotto also expressed his dismay over the zero conviction rate of government agencies in their anti-smuggling efforts since 2016, despite the numerous arrests they have made.

“There is not even one [smuggler] imprisoned? Law enforcers have arrested hundreds of suspected smugglers. This means that many have slipped away,” Sotto said

He likened the situation to the problem hounding the campaign against illegal drugs, wherein smugglers would supposedly allow the seizure of 100 kilos, but 1,000 kilos have been smuggled in.

In an interview after the hearing, Sotto also aired his frustration over the repeated absence of Agriculture Secretary William Dar.

“It’s very disappointing. Aside from the fact that we have not made progress in trying to get all the information needed, especially that the head of the DA himself has not been showing up,” he said.

Sotto hinted that President Duterte should fire Dar for his supposed incompetence in addressing the problems of the agriculture sector.

“What do you need him for if all stakeholders in the agriculture sector are his enemies? His only allies are the importers,” he said.

In her testimony before the committee, Balanoy revealed that the smuggling of carrots had resumed, slowed down only when the issue heated up because of the previous Senate hearings.