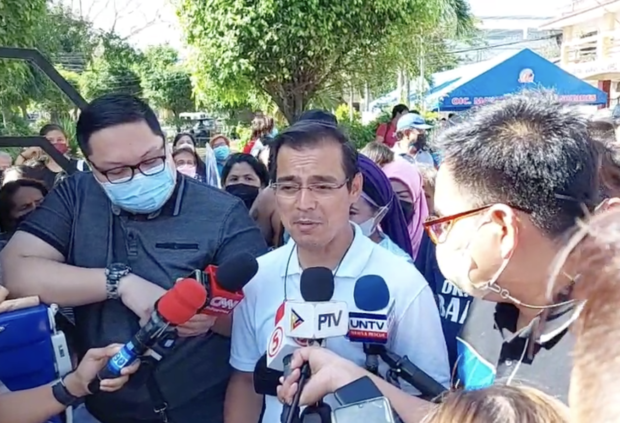 “Good luck, I wish them good luck. It’s a test of character,” Moreno said in an ambush interview in San Pedro, Laguna when asked for his reaction to the latest development.

“So, again many thanks to them, I wish them all the best and this separates the men from the boys,” the Manila chief executive added.

When asked to clarify what he means by “seperating the men from the boys,” the 47-year old politician replied: “Challenging times, pinapakita kung sino ang matibay, kung sino ang hindi (shows who’s strong and who’s not).”

IM Pilipinas was one of the first groups to encourage Moreno to run for the country’s highest elective post.

Orbos said they decided to transfer to Robredo since she is in the best position to defeat frontrunner Ferdinand “Bongbong” Marcos Jr.

Moreno pointed out that those who defect to Robredo are “really angry” with Marcos Jr., a sentiment he does not share, saying the former senator and other presidential candidates are just his competitors.

He said: “Basta ang alam ko sinabi nila sobra daw ang galit nila kay Marcos Jr., eh wala naman akong galit kay Marcos.” (From what I know, they are really angry at Marcos, but I have no anger towards Marcos.)

“Why would I take it personally against Leni Robredo, Marcos Jr. [or] Ping Lacson, [or even] Manny Pacquiao? They are my competitors, I am their competitor, straight and simple,” he went on.

Meanwhile, some officials of IM Pilipinas said they remain loyal to Moreno.

Philip Piccio, the acting secretary-general of IM Pilipinas, said they will support Moreno’s presidential bid until the end.

“We are maintaining what we have started ever since the day that Yorme Isko has decided to file his candidacy for president… We are still going strong as our members continue to grow in all regions of the country,” Piccio said in a press briefing.