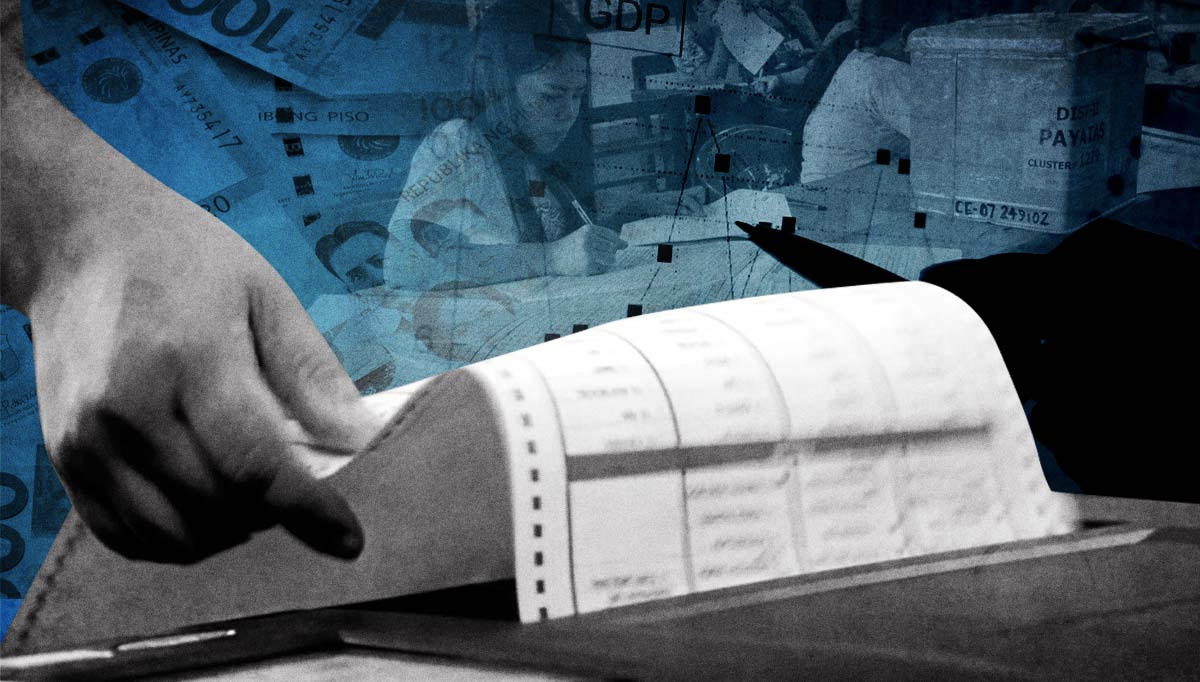 MANILA, Philippines—With less than 30 days until the elections on May 9, the Commission on Elections (Comelec) was asked to address the concerns of those who would perform key duties on Election Day—teachers.

Raymond Basilio, secretary general of the Alliance of Concerned Teachers (ACT), said the Comelec should provide better compensation for teachers and other individuals who will serve as members of Board of Election Inspectors (BEIs).

“There should be no additional burden for teachers,” he told INQUIRER.net, saying that the Comelec should talk with teachers and discuss the concerns that were consolidated through the ACT Teachers Election Hotline.

Last week, ACT went to the Palacio del Gobernador in Intramuros, Manila, to deliver a message—the failure to address the concerns of more than 300,000 teachers over election duty was like sending them to the battlefield “without armaments.”

Basilio said the Comelec should consider ACT’s plea as a call for “help” on how to improve election services. “The welfare of teachers who will serve on Election Day lies in the Comelec,” Basilio said. 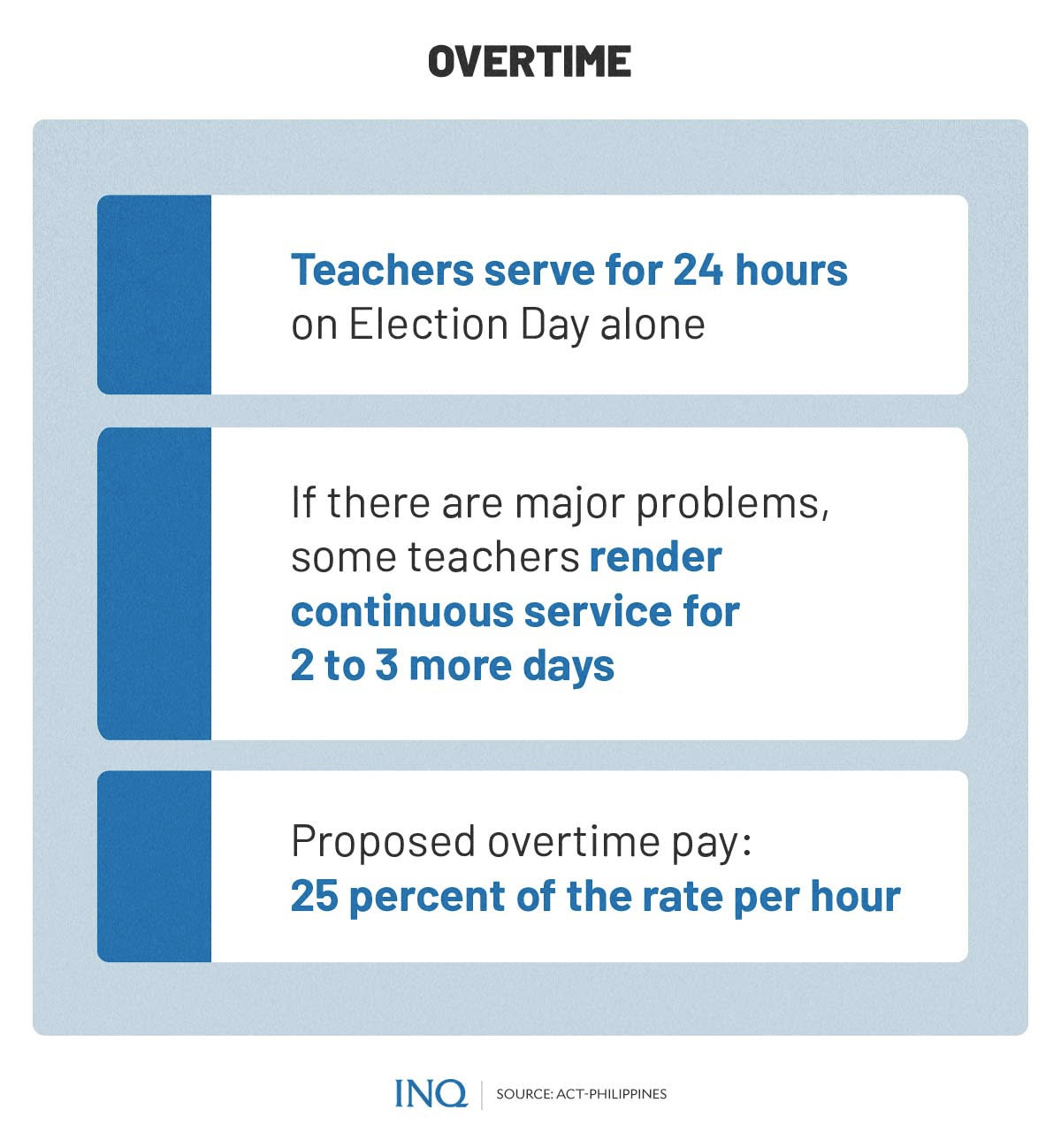 This, as ACT said the election on May 9 is way more “precarious” than previous ones because of the COVID-19 crisis, which has not yet seen its end, and the highly polarized landscape of politics in the Philippines.

ACT stressed that since those who would render election duty, especially teachers, would be at the frontline, “they need all the help they can get from the government.”

Last year, as the Comelec promulgated Resolution No. 10727, the honoraria and allowances were increased, saying that those who will render election-related services are entitled to these:

The Comelec said these will be paid within 15 days from the day of the election and that any person who will cause delay of payment would be held liable.

The increase in compensation was the second since 2016, when Republic Act No. 10756 or the Election Service Reform Act (ESRA) of 2016 was signed by the late President Benigno Aquino III.

When the ESRA was not yet signed, the ACT said those on duty, especially teachers, who work on Election Day, were only receiving a pay of P3,000 and these allowances:

With the law, the honorarium was increased to P6,000 and P5,000 for chairperson and member. The travel allowance was likewise raised to P1,000, ACT said.

‘Taken away by gov’t’

Basilio, however, said the increase in compensation for this year’s election is like “nothing” because of the 20 percent withholding tax set by the government, which is higher than five percent in 2019. 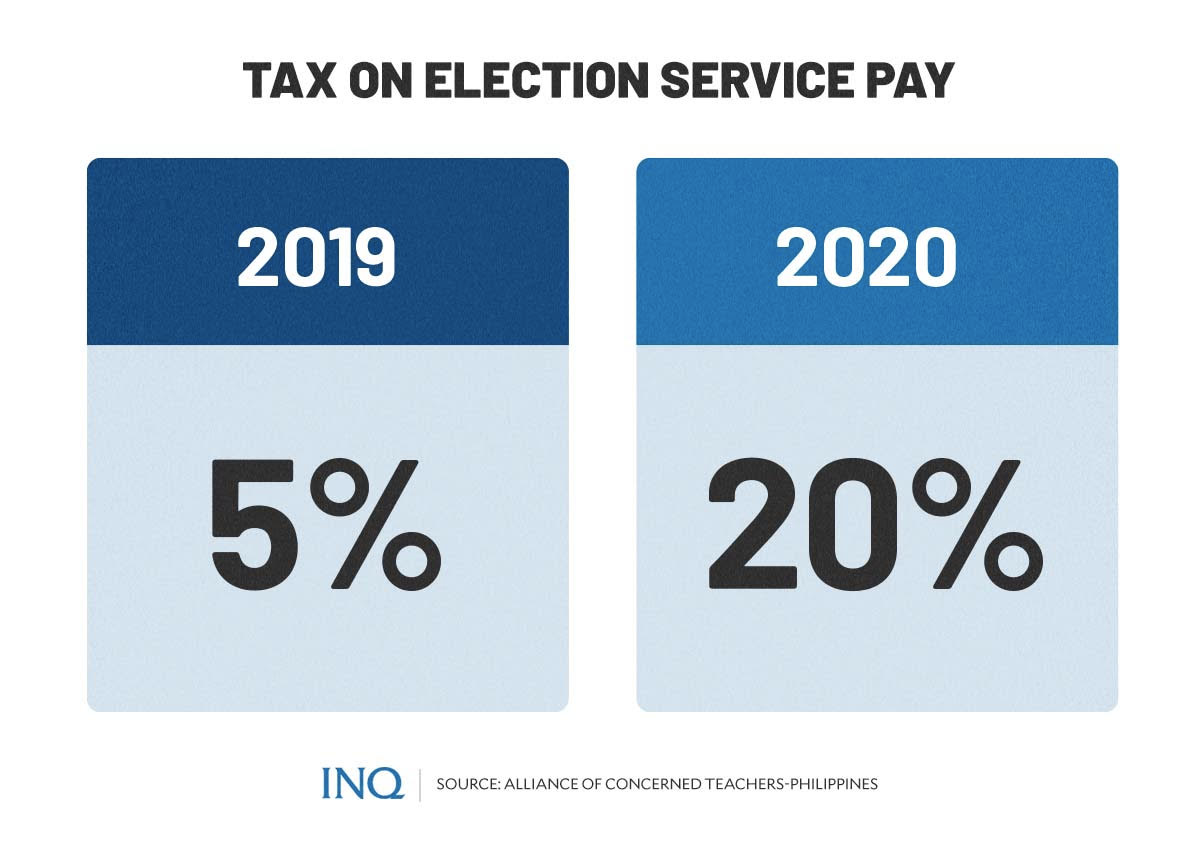 ACT stressed that individuals who will work on Election Day will only have P250 to P1,500 of the P2,000 to P3,000 increase in honoraria and allowances: “The added compensation will also be taken away by the government.”

It said the net compensation is not enough to cover the expenses and pay back BEIs for their tireless work, saying that election service is equivalent to six to 10 days of work:

Last week, the Department of Education (DepEd) said Congress failed to pass a law that will exempt the compensation of individuals who will work on Election Day from taxes.

It stressed that while the Bureau of Internal Revenue (BIR) and the Comelec agreed to exempt teachers from paying a 20 percent withholding tax, there is a law that should be amended first.

Comelec Commissioner George Garcia told GMA’s Dobol B TV that “we hope to bring this to the Bureau of Internal Revenue [and ask] if they can waive the tax on the pay for election-related service.”

However, to have Congress discuss the law, President Rodrigo Duterte will have to call for a special session since Congress is on break. Last year, a bill on exempting this compensation from taxes was passed by the House of Representatives on third and final reading.

Basilio said ACT also asked the Comelec for an overtime pay, saying that while teachers were willing to work overtime, the Comelec should be ready to provide the compensation they deserve. 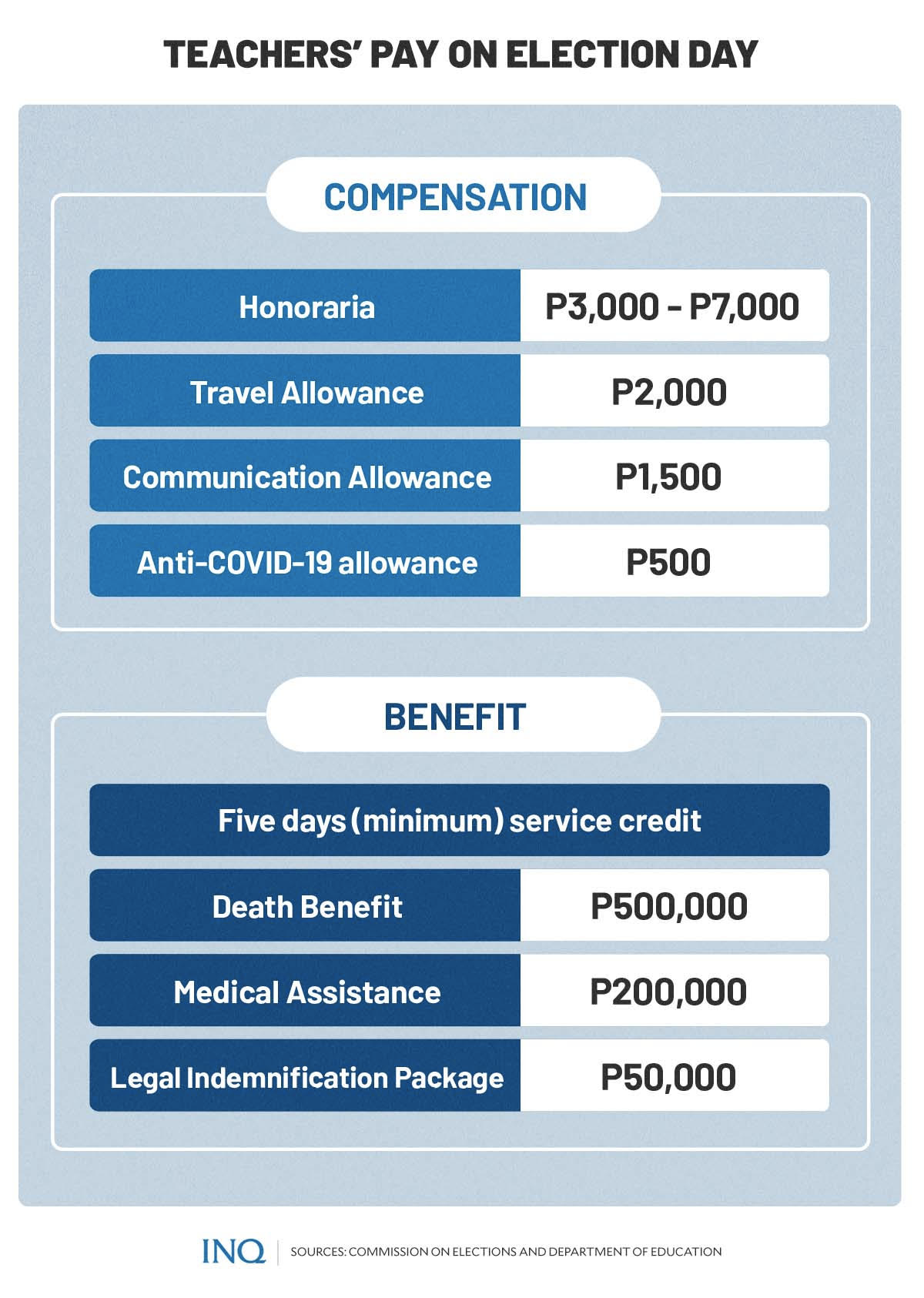 He stressed that election workers, especially teachers, work for 24 hours on Election Day, which is already equivalent to three eight-hour work days. He said when there are serious problems, some BEIs work for two to three consecutive days.

He also said voting will likely not end at exactly 7 p.m. since precincts will still cater to registered voters who are within 30 meters of the precincts. There are 65,745,529 Filipinos who had registered for the election on May 9.

READ: By the numbers: More voters in 2022 than in previous polls

According to Basilio, the “overtime” pay should be 25 percent of the rate per hour, saying that this was provided in the Magna Carta for Public School Teachers that was signed in 1966.

However, Garcia explained that the Civil Service Commission and the Department of Budget and Management provided that Comelec is not allowed to give “overtime” pay to workers who are not its employees.

The DepEd earlier sought a P3,000 across-the-board hike in allowances for teachers who will serve as election workers on May 9, but the Comelec said the pay was deeply hit by cuts in its proposed budget for next year.

The Comelec said individuals who will render service on Election Day will also be entitled to these benefits:

However, Basilio stressed that the Comelec should not set a limit to the help it can give, stressing that it should pay for all the medical needs of an election worker.

He likewise said that the Comelec should deploy lawyers in voting precincts since election workers are sometimes harassed by legal representatives of candidates. “They should oversee,” he said, 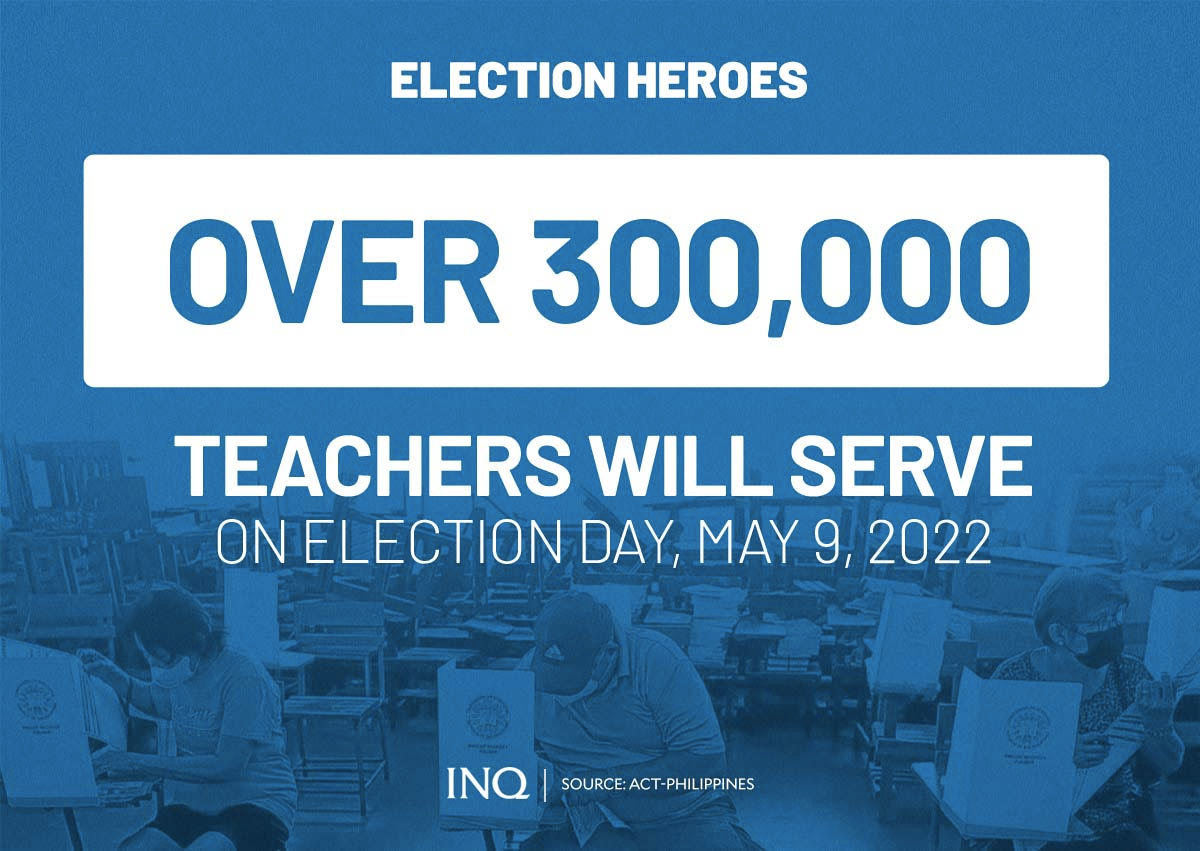 For Basilio, the Comelec should also make it clear if workers will be tested for COVID-19 on Election Day, saying that it is important to know who is fit to work. “This is to prevent the spread of the virus,” he said.

ACT earlier said that BEIs will be responsible for up to 800 voters per precinct. “The high stakes for this election is overstated and Comelec should afford its frontliners the best pay and protection they can.”

Read Next
Nicaraguans learn to swim to get to America
EDITORS' PICK
High inflation: Your P1 is now worth only 87 centavos
UK’s Boris Johnson will resign, BBC reports
Geek out at TOYCON 2022 powered by Smart Signature
House energy committee chair Arroyo bats for cheap electricity
High-risk pregnancy: Reducing your risk is in your hands
Unemployment rate up to 6% in May
MOST READ
Suspect in grisly killing of missing woman in Bulacan arrested
Bankrupt Sri Lanka asks Putin for fuel, tourists
Kim Atienza’s daughter flaunts bikini body in response to critics of her ‘revealing photos’
Bongbong Marcos’ first order: Abolish PACC, Office of Cabinet Secretary
Don't miss out on the latest news and information.