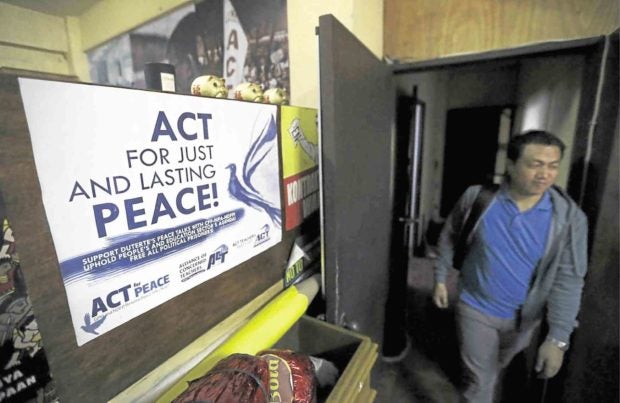 MANILA, Philippines — The Alliance of Concerned Teachers (ACT) on Monday opened an election hotline to help public school teachers who will serve as members of the Board of Election Inspectors (BEI) in the upcoming May 9 national polls.

According to ACT Secretary-General Raymond Basilio, compensation concerns, misconduct of the Election Service Reform Act, and rights and safety concerns in their performance of tasks before and during the elections are among the issues that can be brought to the hotline.

“As with every election, we are again opening our lines for our public school teachers who may experience various issues in the course of the election period,” Basilio said in a statement.

“It’s no secret that teachers who are at the frontlines of every election face several issues from compensation to malfunctioning machines and even threats to their own welfare and safety—these are expected to be exacerbated by the current health and socio-economic crises,” he added.

The organization said it has already received information about problems with BEI registration processes and various repressive and discriminatory instructions from local officials.

Some local Department of Education (DepEd) officials have told ACT that its members are barred from serving in BEIs, while others have threatened teachers with electioneering for practicing fundamental, unalienable rights and freedoms to take part in political dialogues.

Since May 2021, in consideration of the pandemic and the “very dangerous” political climate, ACT has requested the Commission on Elections (Comelec), DepEd, and Congress to ensure a fair wage for all BEIs and to ensure enough legal and medical assistance.

The alliance’s request for significant increases in poll worker honoraria and allowances, as well as an exemption from taxation, were not approved.

The group also noted that instead of P10,000, the largest honorarium a BEI member can receive is approximately P7,000.

ACT likewise reminded Comelec and DepEd that their duty is “to ensure that their own policies do not violate the constitutionally protected rights and freedoms of their frontliners, and that these are properly implemented by their local representatives.”

“That’s the very least they can do. Ensure teacher-poll workers’ rights and welfare as they put their own lives on the line in order to protect the sanctity of votes and ensure the proper conduct of the national elections,” ACT said. —Jericho Zafra, trainee

Comelec: Hazard pay for BEIs not in proposed 2022 budget