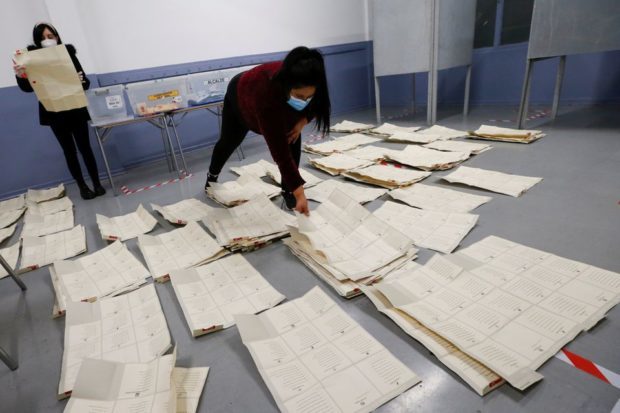 Poll workers wearing protective masks sort through and count the votes after polls closed during the elections for governors, mayors, councillors and constitutional assembly members to draft a new constitution to replace Chile’s charter, in Valparaiso, Chile, May 16, 2021. REUTERS/Rodrigo Garrido

MANILA, Philippines — Teachers and other poll workers serving in the 2022 national and local elections will get an increase of at least P2,000 in honoraria and other allowances, according to a resolution of the Commission on Elections (Comelec).

Comelec promulgated Resolution No. 10727 on Nov. 10 following appeals for an increase in allowances for teachers and other poll workers who will be serving for longer voting hours in the May 9, 2022, elections.

The aforementioned poll workers are also entitled to anti-COVID-19 allowance of P500, as well as a minimum of five days’ service credit if they are in government service.

The EB chair, members, Deso and support staff will also receive a P2,000 travel allowance—P1,000 on the day of final testing and sealing of machines, and P1,000 on Election Day.

On the other hand, medical personnel will receive P1,000 travel allowance on Election Day.

The Deso and their technical support staff will get P1,500 communication allowance.

The Comelec also prefers fully vaccinated individuals below 60 years old and without comorbidities as members of EBs.

The Department of Education earlier sought a P3,000 across-the-board hike in allowances for teachers who will serve as election workers next year. However, the Comelec said the rates of honoraria and allowances were deeply affected by cuts in its proposed budget for next year.

The Election Service Reform Act provided for an increase in the honoraria of teachers but did not provide for other benefits asked for by teachers, Comelec officials said.

The budget cut will not affect the procurement of equipment and supplies for the 2022 elections since these capital expenditures were included in the Comelec’s P14.8-billion budget this year.

Among the projects that were funded by this year’s budget was the P536-million contract to distribute the ballots, vote-counting machines, and other supplies for the elections.

Under the deal, F2 Logistics will be responsible for the delivery of all automated election system-related equipment, forms, and supplies not only for the elections but for field tests.