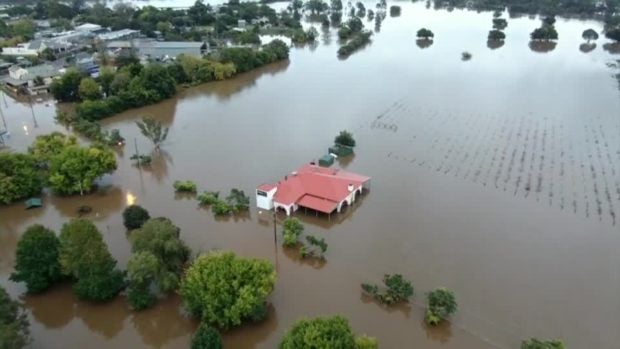 Keyframe of video on flooding in Australia. REUTERS

SYDNEY — Hundreds more Sydney residents were ordered to leave their homes on Friday, some for the second time in a month, as rivers burst their banks even as an intense weather system that dumped more than a month’s rainfall over a few hours began to ease.

A man was found dead after his car was swept away by floodwaters in the city’s southwest, police said, while television footage showed submerged roads and inundated homes and businesses.

Australia’s east coast has been hammered by three separate wild weather patterns in the past six weeks with several regions still battling to clear tonnes of debris after devastating floods submerged entire towns.

“Whilst the rainfall has started to ease in most places, we do expect to see those river levels continue to rise for some time before they start to ease back over the next 12 to 24 hours,” New South Wales emergency services Acting Commissioner Daniel Austin told a media briefing.

The torrential rain has raised the risks of flash flooding and landslips, with Sydney having already received more than its average annual rainfall.

Many residents in the city’s western suburbs, who were asked to evacuate in early March, were ordered to move out again this week. More than 4,000 residents are facing flood evacuations.

“It is heartbreaking, just heartbreaking. I feel sorry for the local businesses … they have been working hard cleaning up and then it came up again out of nowhere,” a resident in a flood-hit Sydney suburb told ABC television.

Sydney, which recorded its wettest March on record, received around 170 mm (6.7 inches) of rain on Thursday, official data showed.

The Bureau of Meteorology forecast rainfall of up to 50 mm (2 inches) on Friday and warned major rivers in the western suburbs should surpass their peak levels later in the day. Warragamba Dam, Sydney’s major water supply, began to overflow on Friday.