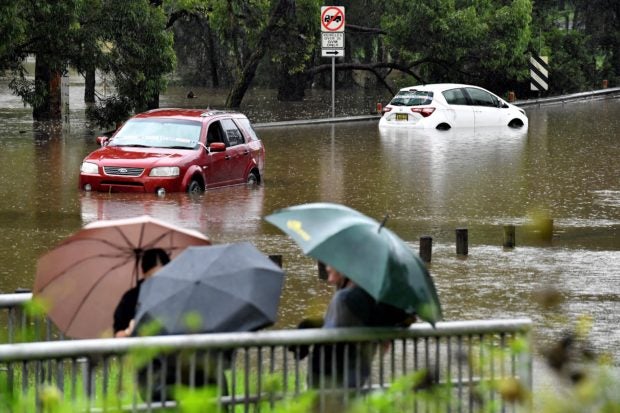 Residents look at cars stranded in floodwaters in southwestern suburb of Sydney on March 8, 2022, as thousands of Sydneysiders have been asked to evacuate from the low lying areas due to heavy rain and flash flooding. | AFP FILE PHOTO

SYDNEY — Heavy rains drenched Australia’s east coast for the second time this month triggering evacuation orders for thousands of flood-weary residents as authorities warned the intense weather system will likely persist for the next 24 hours.

Several towns across northern New South Wales and southeast Queensland states were still battling to clear tonnes of debris after devastating floods early this month killed at least 21 people and swept away hundreds of farms, houses and livestock.

Amid the rebuilding efforts, the Bureau of Meteorology on Tuesday warned of potentially life-threatening flash floods along the northern New South Wales coast stretching across a distance of more than 500 kms (311 miles). There could be isolated rainfall of up to 300 mm (12 inches) in some regions over six hours, the weather bureau said.

The new low-pressure system could be less severe than the previous one but the already-sodden earth from weeks of relentless rains could result in a sudden rise in river levels.

Australia’s east coast summer has been dominated by the La Nina weather pattern, typically associated with increased rainfall, for the second straight year with many rivers already near capacity before the latest drenching.

In the northern New South Wales town of Lismore, among the worst hit by record floods a month ago, residents in low-lying areas were ordered to evacuate late on Monday night.

“We are very much in the hands of the Gods today,” Lismore mayor Steve Krieg told Channel Nine television on Tuesday. “If the expected rainfall comes in … the river could rise quite dramatically.”

Krieg said the chances of another deluge within weeks while residents were rebuilding their lives “just really drains you emotionally and mentally.”

Amid criticism over slow relief, Prime Minister Scott Morrison, behind in polls in an election year, has declared the floods a national emergency and designated catastrophe zones in flood-stricken towns which will receive extra recovery funds.

Read Next
Florida governor signs bill limiting LGBTQ instruction in schools
EDITORS' PICK
What to watch out for when selecting a video surveillance solution
Palace warns sugar hoarders after raid on Pampanga warehouse
Metro Manila’s COVID-19 cases on downward trend, but surge not over — OCTA
Unleash the photographer in you this World Photography Day with vivo smartphones
House energy committee chair Arroyo bats for cheap electricity
Look Through: The fate of impounded stray dogs
MOST READ
WATCH: Rick Astley re-creates ‘Never Gonna Give You Up’ music video 35 years later
Man abducted in Batangas gasoline station, found dead in Quezon
DOJ indicts bank officer in $2.1 billion Wirecard fiasco
PNP bars US legislators’ visit to De Lima due to lack of authority from court
Don't miss out on the latest news and information.