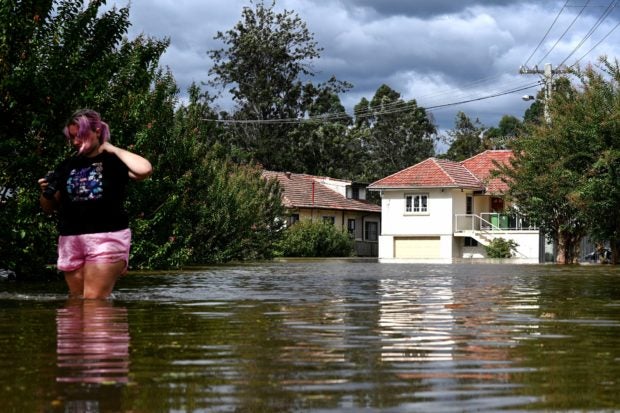 A woman (L) wades through water near inundated homes along the overflowing Hawkesbury River in the Windsor suburb of Sydney on March 9, 2022. AFP FILE PHOTO

A man swept away by floodwaters in the city’s northwest was rescued by emergency crews, media reported, while television footage showed vehicles struggling to cross waterlogged streets, fallen power lines and trees, and debris floating in rivers.

Residents of a nursing home were evacuated overnight as emergency crews urged the harbour city’s 5 million residents to avoid unnecessary travel and brace for possible evacuations.

Thousands have been ordered to evacuate their homes while businesses cleared essentials to help mitigate their losses.

“All hands are on deck to try and save some furniture … so we have been pretty busy lifting things up … moving things away, unplugging filters and electricity, and things like that,” Nicola Gilfillan, a cafe owner in southwest Sydney, told ABC television.

Overflow from a fuel pit at a site owned by oil refiner Ampol (ALD.AX) in Sydney’s south caused oil to mix with flood waters but emergency crews said the spill has been contained and that there was no risk of danger in the area.

A severe weather warning stretched along the south coast of New South Wales over a distance of more than 600 km (373 miles) but conditions are expected to ease from Thursday evening, the weather bureau said.

Australia’s east coast summer has been dominated by the La Nina weather phenomenon, typically associated with increased rainfall, for the second straight year, with most rivers at capacity even before the latest drenching. Warragamba Dam, Sydney’s major water supply, is expected to spill over on Friday, authorities said.

Climate change is also widely believed to be a contributing factor to the severe weather, which has raised questions about how prepared Australia is.

Several towns across northern New South Wales are still battling to clear tonnes of debris after two separate devastating floods in March but the latest weather event has smashed the state’s central and southern coast.