Atienza apologizes to Lacson after call to drop presidential bid 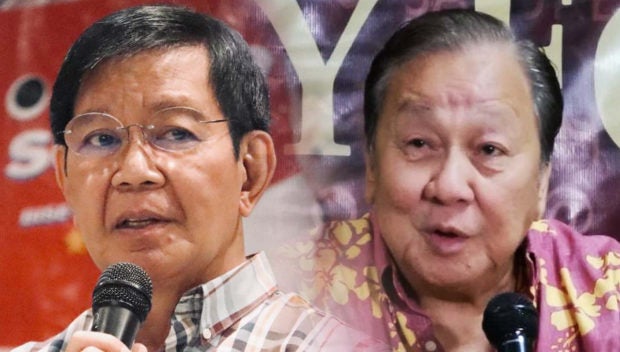 MANILA, Philippines — Vice presidential candidate Lito Atienza on Friday apologized to Senator Panfilo Lacson after he called on the latter to drop his presidential bid ahead of the national elections in May.

Atienza earlier urged Lacson to withdraw his candidacy and let his fellow senators, presidential bet Manny Pacquiao and vice-presidential candidate Vicente Sotto III, form a new tandem. Atienza and Sotto were the running mates of  Pacquiao and Lacson, respectively, for the upcoming polls.

“Hindi expected ‘yung reaction ni Ping. He rejected the idea outright. He, in fact, considered it an insult and I apologize publicly. Sabi ko, ‘hindi naman insulto ‘yun’. I did not mean to insult Ping,” Atienza said at the weekly Pandesal Forum.

“To me, this is a national crisis eh where the most incompetent, the most dishonest… might win the presidency. That is a crisis to me. That’s why everybody should be prepared to react not on a personal note but in a very, very patriotic sense. The idea is not meant to degrade anyone’s competence,” he added.

Atienza said he has “always liked” Lacson, who also previously served as chief of the Philippine National Police.

“We worked together fighting jueteng and drugs. We were effective, the two of us,” Atienza said.

Earlier, Atienza said he is seriously considering dropping out of the vice presidential race as he is suffering from an injury.

Atienza said he is “hoping and praying” that Lacson would do the “self-sacrificing act” of withdrawing from the race so that Pacquiao and Sotto can team up together.

Lacson on March 31 maintained he will not abandon his presidential bid, saying that Atienza should “go back to school and study GMRC (Good Manners and Right Conduct).”

Lacson also said that telling another candidate to withdraw is “insulting.”

Atienza responded to Lacson’s remark the next day, saying the presidential candidate should “learn some manners, too.”