Atienza fires back at Lacson: Learn some manners too | Inquirer News

Atienza fires back at Lacson: Learn some manners too 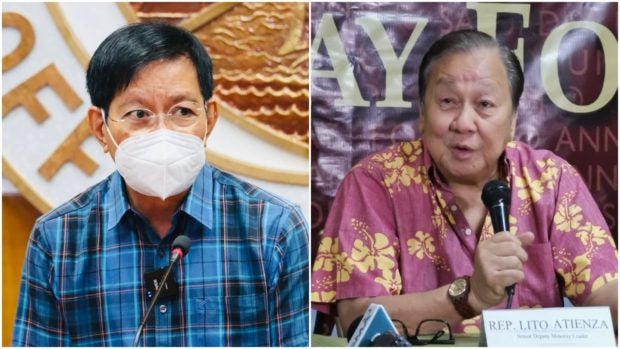 This was the response of vice presidential bet Rep. Lito Atienza to Senator Panfilo Lacson after the latter rejected his suggestion to drop out from the presidential race to give way to a Pacquiao-Sotto tandem.

“Very clear that he did not take it well. It was full of patriotic sense and I thought Ping is a genuine patriot,” Atienza said in an ANC interview on Friday.

Atienza said “there was nothing insulting” about his suggestion to Lacson. Atienza said that what was “insulting” was the senator’s response.

“Yung sagot niya, bumalik daw…I took that (GMRC) up in Grade 1, 2, 3, 4 and in my family home…Yun ang insulting.  My retort to that is, learn some manners, too, Ping. Yung values mo iba e,” Atienza said.

(His response, that I go back to school…I took that up(GMRC)  in Grade 1, 2, 3, 4 and in my family home. That’s insulting. My retort to that is, learn some manners, too, Ping. Your values are different.)

He was referring to Lacson’s pronouncement, saying Atienza should “go back to school and study GMRC (Good Manners and Right Conduct).”

“I think I was mistaken to make that suggestion to somebody like you. I should’ve waited for your decision,” Atienza went on.

“Ayoko naman makasira ng partnership nila. Kung talagang desidido siya [I don’t want to ruin their partnership. If he’s really decided], I will respect the decision. No hard feelings. No nothing. It’s your decision Ping. Not mine,” he further said.

“It’s your call not mine. You don’t need to be insulting to make your point. ‘Di ako magwi-withdraw dahil itutuloy ko ang laban’ [‘I will not withdraw, I will continue my fight’]. Good, I will clap for you. Bravo, that’s my Ping Lacson,” he added.

Asked for a reaction on Atienza’s latest statements, Lacson told INQUIRER.net he has “no further comment.”

“I have said what is there to be said,” Lacson said.

On Thursday, Atienza told reporters he is “very seriously” considering dropping out of the vice presidential race.

He added that he is “hoping and praying” that Lacson would do the “self-sacrificing act” of withdrawing from the race so that his running mate, vice presidential bet Senate President Vicente Sotto III, can possibly team up with another presidential candidate, Senator Manny Pacquiao.

“I hope he  (Lacson) backs out, too, and that could change the whole structure that could completely demolish the Bongbong-Sara tandem,” Atienza had said.