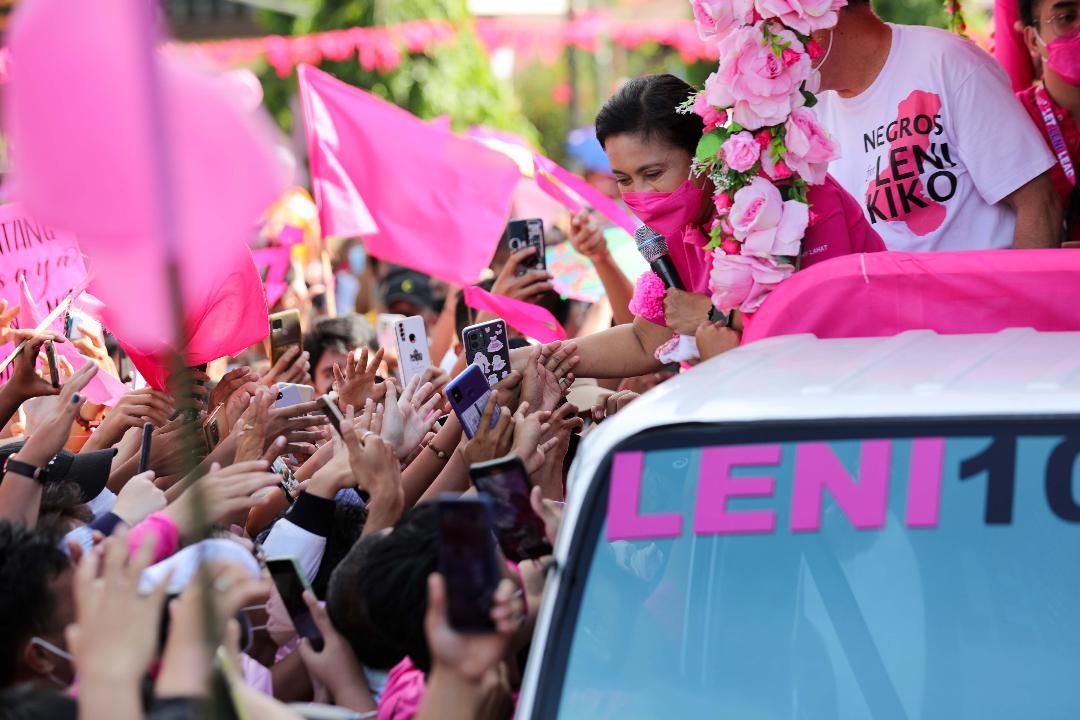 Presidential candidate Vice President Leni Robredo at a whistlestop at the Hinigaran Public Plaza in Negro Occidental on Friday, March 11, 2022. Robredo and daughters Aika and Tricia rode a pink truck as they waved to the thousands of supporters who cheered them on along the road. (VP Leni Media Bureau)

MANILA, Philippines — Voter preference surveys are now starting to reflect the groundswell of support for Vice President Leni Robredo’s bid for the presidency, her spokesperson said.

In a statement on Wednesday, lawyer Barry Gutierrez said surveys are now showing just how many people are rallying behind Robredo, and help her win the presidency come election day on May 9.

“The survey numbers are starting to reflect what we have been seeing on the ground all along: the massive crowds, the fierce passion, the untiring commitment of Filipinos from all walks of life, coming together to rally behind Leni Robredo’s bid for the Presidency,” Gutierrez said.

Gutierrez said the Pulse Asia survey clearly shows that Robredo now has the momentum, with a little over a month before election day.

“This 13-point swing going into the last two months of the campaign clearly establishes what we have long known: VP Leni has the momentum, which we expect will only further intensify and accelerate all the way to May 9,” he explained.

(What we are seeing now is the turning of the tide.  With the help of our fellow Filipinos who continue to move, knock, plead, and convince other people, we can win this fight.)

When the February edition of Pulse Asia’s survey was released, Gutierrez calmed supporters’ fears about Robredo’s campaign not getting any traction, stressing that the numbers do not reflect the massive ground movements.

While Robredo already attracted huge crowds during the early part of the official campaign season, numbers started to increase mid-February, starting with her rallies in Cebu, Iloilo, Cavite, Bulacan, Isabela, Bacolod, Zamboanga, Basilan, and then in Pasig City which drew a record crowd of over 100,000.

Read Next
House Committee on Labor and Employment is ‘most productive’ during 18th Congress
EDITORS' PICK
Heads may roll at BOC, says Palace if sugar smugglers are allowed to use recycled import permits
What to watch out for when selecting a video surveillance solution
DOH reports increase in daily COVID-19 deaths, mostly unvaxxed
House energy committee chair Arroyo bats for cheap electricity
vivo brings to the Philippines a powerful smartphone with a slimmer body, the vivo Y02s for only PHP 6,499
Palace: Biggest supermarkets in PH commit to sell sugar at P70 per kilo
MOST READ
Metro Manila’s No. 1 wanted man arrested, says NCRPO
Alyssa Valdez to miss Creamline’s AVC Cup campaign
Peso loses ground vs US dollar
Mayor bares issues vs closed QC school
Don't miss out on the latest news and information.