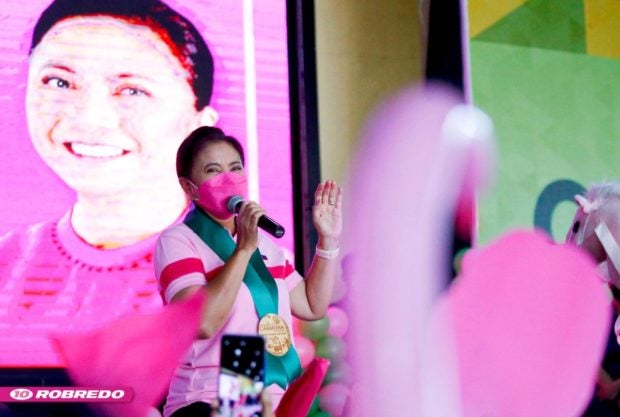 MANILA, Philippines — Vice President Leni Robredo’s spokesperson has expressed optimism about her victory in the presidential race, discounting the February survey which showed her getting a small percentage of voter preference and noting the “snowballing” of support for her in recent weeks.

Lawyer Barry Gutierrez pointed out that the latest survey of Pulse Asia does not reflect yet the massive support that Robredo has been getting as demonstrated during “massive, record-breaking rallies from Butuan to Bacolod, Cavite to Isabela, Sampaloc to Malolos.”

“The latest Pulse Asia survey was done prior to these game-changing developments and does not yet capture the more recent surge in VP Leni’s support,” he also said in a statement on Monday.

“With this clear momentum from the people’s campaign – reflected both in the massive rallies as well as in online metrics – we are confident that the next 56 days will culminate in an election day victory for Leni Robredo,” he further said.

The presidential survey was conducted face-to-face from February 18-23, involving 2,400 registered voters, according to Pulse Asia. In this survey, Ferdinand Marcos Jr. still leads with 60% while Robredo came in second with 15%.

The survey had a ± 2% error margin at the 95% confidence level, Pulse Asia said.

Since Robredo’s proclamation rally on February 8 in her hometown Naga City, where 15,000 people showed up, her sorties have usually attracted immense attendance. In her Cebu rally, more than 10,000 people came but this was outdone by Iloilo, where more than 40,000 people participated in her team’s grand rally.

In Cavite, organizers said 47,000 people attended the grand rally for Robredo and her slate while in Bulacan, 40,000 turned up in the Malolos City event.

So far, the largest attendance was in Bacolod where organizers said around 7o,000 to 80,000 supporters came last Friday, March 11.

Robredo has embarked on a grassroots-based presidential campaign for the 2022 national elections, with communities and volunteers arranging rallies, caravans, and other political events.

Observers said such a method of campaigning is a test of how much of an influence incumbent local politicians have in their areas.