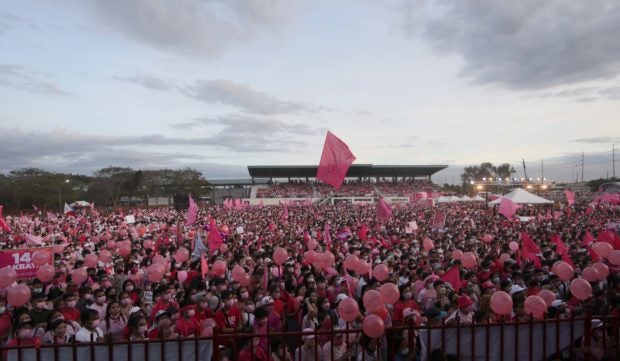 More than 30,000 supporters of Vice President Leni Robredo, many of them from the youth sector, filled the General Trias Sports Park in Cavite in a flurry of pink, at the presidential aspirant’s Grand Rally in Cavite on Friday, March 4, 2022. (VP Leni Media Bureau)

“You may have seen on Facebook [the event] in Cavite last night,” Robredo told supporters who welcomed her in San Jose del Monte City, Bulacan, on Saturday.

“Anywhere we go, people have been flocking to the venues,” she said. “We were really very surprised because those who organized the event in Cavite were just volunteers. They estimated the crowd at around 47,000.”

The huge turnout at Robredo’s political rally in Cavite, the country’s second most vote-rich province, was visibly bigger than a similar event held in Iloilo City exactly a week ago, which was attended by about 40,000 “kakampinks.”

The organizers said many of them were motivated by the claim of Cavite Gov. Jonvic Remulla that Robredo’s staunchest rival, Ferdinand Marcos Jr., would get at least 800,000 votes in the province.

As in her previous speeches, Robredo urged the voters to scrutinize the service records of candidates wooing their votes, pointing out that many of them only remember the poor and other basic sectors during elections.

Robredo hops on a motorcycle to reach Cavite grand rally