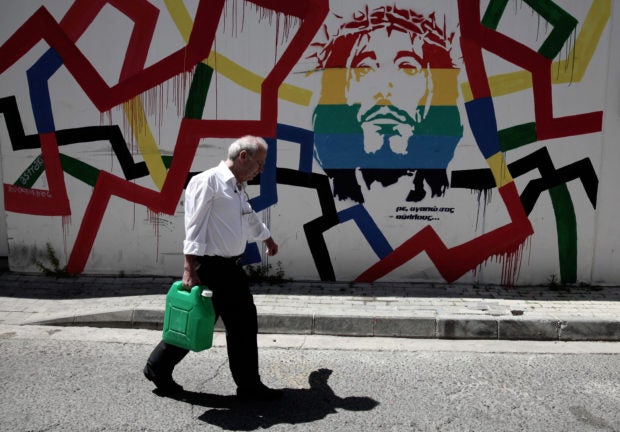 In this file photo taken on May 31, 2014, a man walks past graffiti depicting a rainbow-colored silhouette of Jesus Christ with text in Greek reading “I love you all” in Cyprus’ Nicosia, ahead of its first pride parade, 16 years after homosexuality was decriminalized and where the influential Greek Orthodox Church views non-heterosexual relations as sinful. AFP

NICOSIA — Cypriot lawmakers and activists are pushing to criminalize “gay conversion therapy” which has left members of the island’s LGBTQ+ community traumatized through “medieval” practices such as exorcisms.

A recent report by the activist group Accept-LGBTI Cyprus surveyed around 100 people and revealed the scope of widely discredited practices that claim to be able to change sexual orientation or gender identity still being carried out on the Mediterranean island.

“A victim was forced by a priest to kneel in front of a statue of Jesus Christ and apologise for having sinned,” said Stefanos Evangelides, a lawyer and member of Accept.

“Another was forced by an endocrinologist to take a course of testosterone (male sex hormones), because the doctor said he was too effeminate.”

And yet another “was exorcised by a priest”, Evangelides added, noting some people had attempted suicide following the so-called therapies.

The Cyprus Orthodox Church continues to wield considerable influence on the island, which joined the EU in 2004.

Homosexuality was decriminalised in 1998, but while same-sex civil unions are permitted, gay marriage is not.

“The protection of the rights of the LGBT community” only began to emerge around a decade after decriminalisation, when Accept was set up, said psychologist Margarita Kapsou, a founding member of the organisation.

The activists’ report has sparked outcry and prompted discussions within parliament on the need for legislation to outlaw the practices.

One communist party MP has submitted a draft law which, if passed, would sentence those carrying out conversion therapy to two years in jail, or three if the victim is a minor or deemed vulnerable.

“We must protect young people and adolescents against medieval, humiliating and illegal practices,” said the lawmaker, Giorgos Koukoumas.

“Members of the LGBT community are not sick people who need treatment — and this, too, is the message that we want to convey to society,” he added.

The debate comes as the British government is also grappling with proposed legislation that would make it illegal to provide conversion therapies to minors or non-consenting adults, but which campaigners say does not go far enough.

One British government source said the legislation, first promised in 2018, would now cover “only gay conversion therapy, not trans(gender)”.

The British government reportedly wants to limit any ban so that doctors can counsel children who believe they are suffering from gender dysphoria.

The Cyprus psychiatric association meanwhile is among those supporting calls for conversion therapy to be criminalised on the island.

Its head, Lambros Samartzis, said his professional community was “in shock” following the report’s publication.

“Sexual identity, sexual orientation… are not pathologies. This is not an illness,” he said, emphasising the trauma linked to such practices.

Despite progress on gender issues, more legislation was needed to protect the LGBTQ+ community, said Costa Gavrielides, the Cypriot president’s adviser for diversity.

“The draft law can put an end to the discrimination,” he said, but noted that some taboos such as same-sex marriage and parenting will still need to be confronted.

The influential Cyprus Orthodox Church has declined to be drawn into discussions, including on the question of conversion-therapy exorcism.

“It’s incomprehensible why the Church should be allowed yet again to air (to lawmakers) its well-known and very un-Christian opinions on homosexuality and make Cyprus into a laughing stock abroad,” the Cyprus Mail daily said in an editorial.

A number of countries including France, Germany and Malta and some regions of Spain, have already criminalised the so-called therapy.

Supporters of Cyprus’s LGBTQ+ community are hopeful parliament will soon vote to put an end to the practice.

“We need to be protected by laws in order to be integrated within society and enjoy the same rights as everyone else,” Evangelides said.