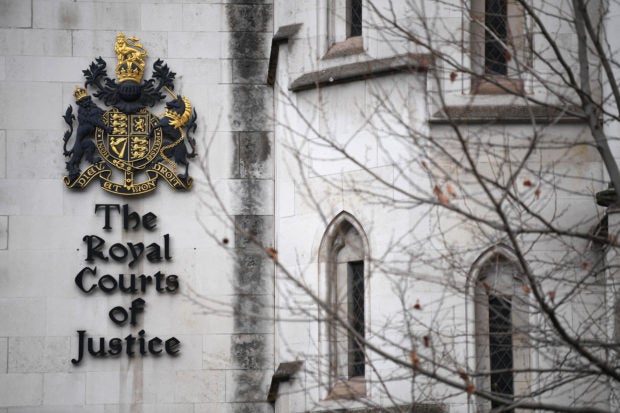 A picture shows the front of the Royal Courts of Justice, home to the High Court, in London on January 19, 2021.  AFP FILE PHOTO

LONDON — No more faked evidence or years-long waits — from Wednesday, unhappy spouses in England and Wales can end their marriages without blaming each other, in the biggest reform of divorce law for half a century.

The onset of “no-fault” divorces means one spouse no longer needs to prove the other guilty of adultery, “unreasonable behavior” or desertion.

If such grounds did not exist, the couple had to live apart for two years before a divorce could be granted — or five years if one partner objected to the proceedings.

The change brings England and Wales into line with Scotland, which has its own legal system, and with other countries including the United States, Australia and Germany.

While experts expect a rush of divorces by couples who were waiting for the legal reform, they predict it could also ironically increase rates of marriage, by promising an easier way out if the relationship sours.

The case of Tini Owens galvanised a campaign for the change after she lost a Supreme Court fight in 2018, having failed to persuade the judges that her 40-year marriage should end.

Her husband had contested her claims of unreasonable behaviour, and the judges ruled that being trapped in an unhappy marriage was not in itself grounds for divorce.

“No-one should have to remain in a loveless marriage or endure a long, drawn-out and expensive court battle to end it,” Owens said.

“This change in the law guards against that happening and I welcome it,” she added.

The reform does not herald US-style “quickie divorces” — there is a minimum wait of 20 weeks between a spouse first initiating proceedings and then applying for a legal order.

They must then wait another six weeks before the divorce can be granted.

But it does overhaul the current system, in place for decades, under which some spouses would resort to private detectives to find evidence of fault, or the couple would agree simply to concoct the evidence.

Vicky admitted that she and her first husband “had to make up scenarios and situations that we felt were going to be accepted” by the court after they had agreed to an amicable divorce.

Her second marriage was to a “very manipulative” and “violent” man who refused to engage with divorce proceedings, forcing her to wait for five years of separation.

“And I could have been out of that relationship a lot quicker and a lot sooner than I was,” Vicky, giving only her first name, told BBC radio.

Some lawyers welcomed the end of an adversarial divorce culture, while stressing that legal advice remained essential for resolving financial and child custody issues.

A survey commissioned by the law firm Slater and Gordon pointed to an unintended consequence — 32 percent of cohabiting respondents said they were more likely to get married now that the divorce process was simpler.

Divorce will never be the answer to problematic unions — Rep. Villanueva