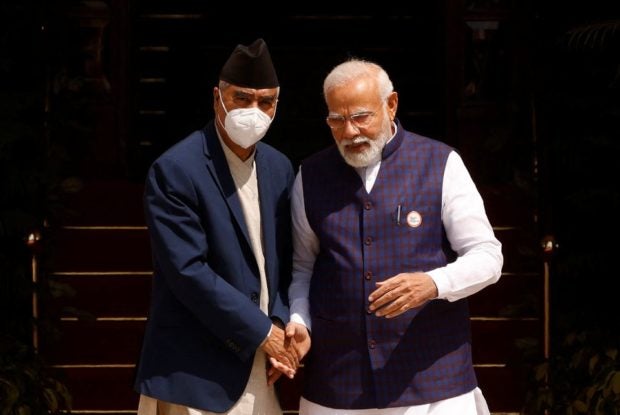 Deuba’s first trip to India since becoming prime minister in July comes a week after a visit by Chinese Foreign Minister Wang Yi to Nepal.

Nepal, a natural buffer between India and China, traditionally balances its ties with Beijing and New Delhi as both seek to woo it by pouring in aid and investment for infrastructure.

After the meeting, Deuba and Modi jointly flagged off Nepal’s only railway link between Janakpur in Nepal and the border town of Jaynagar in India.

The 35-km (22-mile) railway was reconstructed by India as a grant. It was built by the colonial British Indian government as a narrow-gauge line to transport logs from Nepal.

Both countries agreed to speed up the Pancheswar hydroelectric project on their border in west Nepal, which Modi said would be a “game changer” for the development of the region.

“The friendship between India and Nepal and mutual relationship between our people … cannot be found anywhere in the world,” Modi told a news briefing after the meeting. “Threads of our civilization, culture and mutual exchanges have been linked since ancient times.”

Deuba said Nepal’s ties with India were “highly important” and Kathmandu was “eager to benefit from India’s progress through a mutually beneficial economic partnership.”

Nepal agreed to use the Indian RuPay card which would strengthen “financial connectivity,” and promote Indian tourist flows, India said in a statement.

Both sides also signed agreements that include cooperation in railways and sharing technical expertise between the Indian Oil Corporation (IOC.NS) and Nepal Oil Corporation.

Analysts said the visit would help further promote the multi-faceted relations between India and Nepal.

“The visit is taking place after four years and will help increase trust and understanding between the two countries,” Dinesh Bhattarai, a Nepali former ambassador to Geneva told Reuters.

Quarantine-free entry in India for vaccinated passengers from Feb. 14