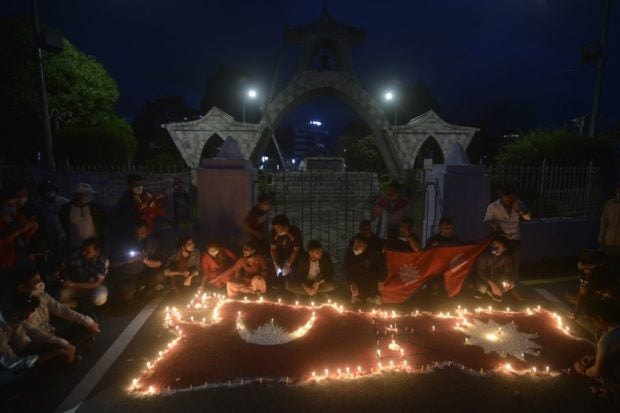 People light candles as they celebrate after the parliament approved a new national emblem with a controversial political map that includes strategic territories disputed with its giant neighbor India, in Kathmandu on June 13, 2020. Photo by PRAKASH MATHEMA / AFP

NEW DELHI — India’s border troubles with its neighbors have continued to intensify beyond China.

Nepal’s Parliament fast tracked a constitutional amendment Bill approving a new map that includes territories of Limpiyadhura, Lipulekh and Kalapani, which India considers its own.

The new map was passed unanimously last Saturday (June 13) in the Lower House, and is now in the Upper House where it will be put to a vote on Thursday.

The Bill received bipartisan support in the Lower House, with 258 out of 275 members voting to redraw the map.

If passed by the National Assembly, the Bill will have to be approved by Nepalese President Bidhya Devi Bhandari before it becomes a part of the Constitution.

India is understood have reached out to Nepal to initiate talks.

But analysts in Nepal said Prime Minister K P Sharma Oli, who has been facing protests over the handling of the coronavirus pandemic amid accusations of poor testing, would not stop a process that has attracted bipartisan support.

Mr Oli, under domestic pressure, last month even accused Indians of bringing a more lethal virus strain to Nepal, which has 6,591 cases with 19 deaths.

“Moving ahead, the only option left for both countries to stop the relations from further backsliding is immediate beginning of serious dialogue. A good point to start would be India’s positive response to Nepal’s diplomatic communications. That Nepal’s Parliament would endorse the new map is a foregone conclusion,” said Nepal-based geopolitical analyst Tika P. Dhakal.

“What no one thought was that there would be a complete unanimity (in Parliament). Nepal knows very well that the map reinforces its historic claim in the Lipulekh triangle but does not affect the operational status quo. Nepal and India cannot afford to remain in a situation of zero dialogue. Costs will be high for both.”

The border row exploded after India’s Defense Minister Rajnath Singh in early May remotely inaugurated a road connecting Lipulekh pass, claimed by Nepal, with Dharchula. The latter, a town in the northern Uttarakhand state, is a major trading center for the trans-Himalayan trade routes.

Lipulekh pass itself is in a tri-junction area between India, China and Nepal.

The link road,which was completed in April and stops 4km short of the China border, was criticized by Nepal as running against the “understanding reached between the two countries”.

India’s Ministry of External Affairs, reacting to the map mooted by Nepal, said the territorial claims were not based on historical fact or evidence.

Amid the border tension, one Indian civilian was killed and two others injured on the border. New Delhi has raised the issue with Kathmandu but has not sought to escalate the issue.

On Monday, New Delhi struck a more conciliatory note, with Mr Singh saying India would sort out the “misunderstanding” with talks, but maintained its claim on the areas.

The two countries have close people-to-people ties and an open border, allowing free movement of people.

However, Indian analysts believe that the “special relationship” that the two countries have often highlighted in the past is eroding.

“India has not been able to stop (the new map) and I think they informally tried once or twice to reach out. It is a territorial nationalist issue,” said Professor S.D. Muni, India’s special envoy to South Asia.

“The relationship has been strained. There is no doubt. It has given a blow to Indian thinking on Nepal.”

Some in India have also pointed a finger at China for having a hand in India’s troubles with Nepal.

No less than India’s Army chief Manoj Mukund Naravane had hinted that the border row had erupted at the “behest of someone else” in what was seen as a reference to China, which has been slowly increasing its presence in Nepal.

Some believe the border row, which was earlier in the backdrop, would now remain a permanent irritant in ties.

“This certainly will have a long-term impact between the two states who share the same civilization and have co-existed together peacefully for centuries,” said Kathmandu-based political analyst Chandra Dev Bhatta.

“It certainly will be difficult for Nepal to roll-back,” he said, referring to the political consequences domestically.

“This issue certainly could have been sorted out prudently but both the countries have failed to use diplomatic channels, for reasons which are not clearly known.”