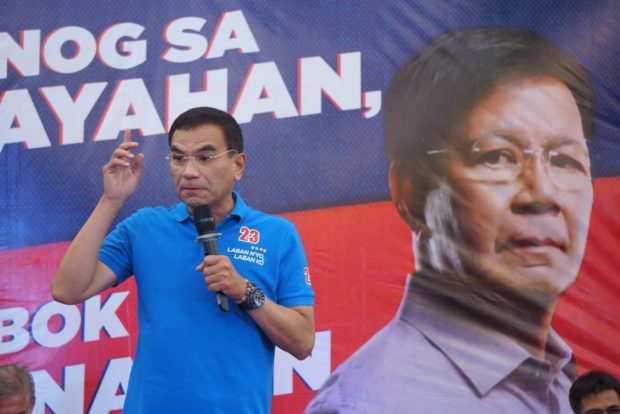 Gen. Guillermo Eleazar during one of his campaign sorties. Contributed photo

Eleazar, who campaigned in this city and in other parts of Leyte, said Lacson is serious in his plan to become the country’s next president.

Vice presidential candidate Lito Atienza, the running mate of Sen. Manny Pacquiao, has asked Lacson to withdraw from the presidential race so the opposition will win in the May 9 elections.

Atienza’s idea was rejected by Lacson.

According to Eleazar, it was Lacson himself who encouraged him to run for the Senate.

Eleazar said that while his political party has shifted support to Vice President Leni Robredo, he will continue to campaign for Lacson.

Both Romualdez and Petilla are supporting the presidential bid of former senator Ferdinand “Bongbong” Marcos, Jr.

Eleazar also said that he is optimistic that members of the police organization will throw their support to his senatorial bid.

He, however, said that only the “scalawags” in the police organization will not vote for him.

If elected, Eleazar said he will give focus on strengthening the police organization and on improving the agriculture and fishery sectors, among other priorities.