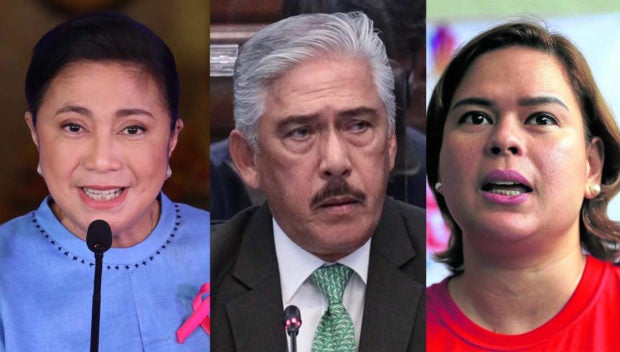 MANILA, Philippines — Vice President Leni Robredo’s spokesperson admitted on Tuesday that supporters pairing the presidential candidate with another vice presidential bet is a reality in Philippine politics, where the two highest officials of the land get elected separately.

Lawyer Barry Gutierrez in an interview on Tuesday morning was asked about how Robredo’s office feels about local officials picking Davao City Mayor Sara Duterte-Carpio as a vice presidential bet, instead of Senator Francis “Kiko” Pangilinan who is the Vice President’s official running mate.

Gutierrez told ABS-CBN’s Teleradyo’s On the Spot that they have been clear about pushing for a Leni-Kiko tandem for the 2022 polls, but they are nevertheless thankful for the support Robredo has been getting from various groups pairing her with another candidate.

(Isn’t it the reality of campaigns in the Philippines, because we don’t vote for a tandem?  Since the voters are free to pick their own vice president and president, that would happen in every election.)

“So kami naman, so long as merong declaration of support for one of the candidates, hindi namin minamasama, nagpapasalamat kami do’n sa taong nag-eendorso,” he added.

(So for us, so long as there is a declaration of support for one of the candidates, we are very grateful, we don’t take it against them, we thank the people who are making endorsements.)

He acknowledged though that they are somewhat concerned about people not picking Pangilinan, even if Robredo has been firm that her vice presidential bet is the senator.

(Well there are some concerns of course, because the position of VP Leni, and the position of the campaign is to push for Leni-Kiko all the way until the end.  That’s what we’re moving for, that’s what VP Leni is campaigning for, he was the partner chosen by her, and that is what we would be fighting for until the last days.)

(We always clarify that if you want a tandem that is not Leni-Kiko, that is your prerogative.  But if you support even one of our candidates, then thank you very much.)

Over the past few weeks, Robredo has been paired by some of her supporters — including key officials like Albay Rep. Joey Salceda and Cagayan de Oro 2nd District Rep. Rufus Rodriguez — with Duterte-Carpio despite the latter being the other half of the Uniteam that has former senator Bongbong Marcos as standard-bearer.

On another side of the fence, Davao del Norte Rep. Pantaleon Alvarez, who recently withdrew support for Senator Panfilo Lacson in favor of Robredo, said that they are still backing Senate President Vicente Sotto III as their vice presidential bet, forming the so-called “Le-Ti” or Leni-Tito tandem.

Vice presidential bet Rizalito David also said that he is willing to take a step back and form a grand coalition for the Robredo-Sotto tandem.

Robredo — during the same press conference where Alvarez announced his support — clarified that her vice president will always be Pangilinan.

For Pangilinan, he believes that those who have been pairing Robredo with another vice presidential bet are only trying to steer the opposition in different directions.

While current surveys indicate that Robredo is second behind Marcos — Pangilinan currently ranks third, behind Duterte-Carpio and Sotto.

Opposition allies like Senator Antonio Trillanes IV have noted that even if Robredo is gradually bridging the gap between her and Marcos, that is not the case for Pangilinan, as not all of Robredo’s supporters would vote for him.