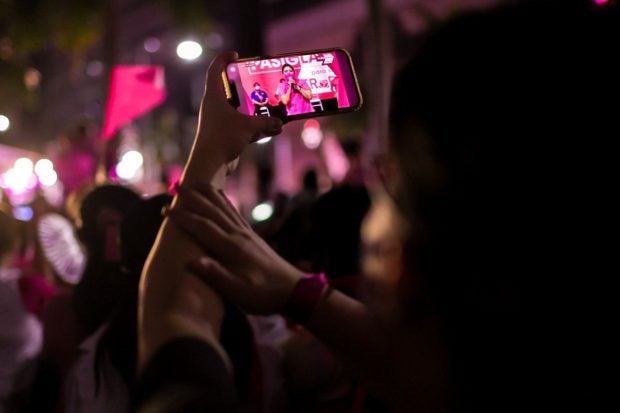 Supporters of Vice President Leni Robredo listen during her speech at the PasigLaban rally in Pasig City. Image from VP Leni Robredo Facebook

MANILA, Philippines — Vice President Leni Robredo is still trailing the frontrunner for the 2022 presidential race, but is already starting to narrow the gap according to former Senator Antonio Trillanes IV.

Trillanes during his speech at the PasigLaban rally on Sunday night referred to their internal surveys which supposedly indicate that the opponent’s lead is dwindling.

The former senator did not mention what survey that was and who the opponent is, but it is presumed to be former senator Bongbong Marcos who still holds a commanding lead in publicly-released surveys from Pulse Asia and the Social Weather Stations.

(You know I have something to admit: because our internal survey has just ended, and it showed that the opponent still leads.  But the good news is Leni has been narrowing the gap.)

Aside from that, Trillanes said that the same internal survey showed that Robredo would win in Pasig City, where the 130,000-strong crowd converged.

(And another good news, Leni wins here in Pasig. That’s two cities in Metro Manila where our president Leni wins, and we would win in other cities too.)

(And they have just informed me of another good news: the record holder now for rallies is Pasig.)

However, Trillanes also admitted that they have been seeing a huge number of people who are picking Robredo for president, but are not necessarily voting for her running mate, Senator Francis Pangilinan.

Trillanes urged the public to pick Pangilinan if they want Robredo as the next president, as teamwork is necessary for progress.

(Do we love Leni Robredo?  How much do we love Leni?  A lot, right, because she is willing to love us even more.  You know what she has been doing for the last six years, she really showed how much she cares for the people.)

Onto the next Pulse Asia survey released last March — held from February 18 to 23 — Marcos was able to maintain his lead over Robredo, still getting 60 percent of the votes, with Robredo’s share dwindling by one percentage point.

But the numbers are even worse for Pangilinan: in the March survey, he ranked third behind Marcos running mate and Davao City Mayor Sara Duterte-Carpio (53 percent) and Senate President Vicente Sotto III (24 percent).

Pangilinan was not present during the PasigLaban rally, as he attended the vice presidential debates hosted by the Commission on Elections during the same hour.

The Marcos and Duterte tandem, on the other hand, did not attend the debates.