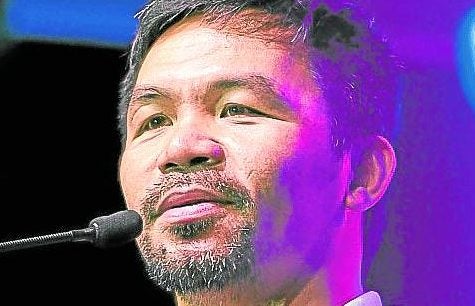 Senator Manny Pacquiao is running for president in the May 9 elections. INQUIRER FILE PHOTO

MANILA, Philippines — Presidential candidate Manny Pacquiao is pledging to put in jail former first lady Imelda Marcos if her conviction on seven counts of graft by the Sandiganbayan becomes final and executory by the Supreme Court.

(There is no exemption. As long as you are convicted by the Supreme Court, we will follow it, we will implement it.)

Pacquiao also said he would give humanitarian consideration to Marcos because of her old age such as not placing her in a regular prison.

(Imelda is old. It is precious for us that someone has reached such an old age. We should give her a favor since she’s old. We may not put her in regular jail because she might die there. We may just separate her.)

On November 9, 2018, the Sandiganbayan found Marcos, widow of ousted dictator Ferdinand Marcos Sr., guilty of seven counts of graft for maintaining illegal financial interests in different foundations in Switzerland that reportedly served as conduits of ill-gotten wealth for her family. She was a district representative of Ilocos Norte at the time of the anti-graft ruling.

Marcos was sentenced to six years for each case or a total of 42 years imprisonment. But she never served even a single day in jail as she was granted bail totaling P300,000 while her appeal case is pending.

All court records pertaining to the seven graft cases for which Marcos was convicted have already been turned over to the Supreme Court.

Pacquiao said that being an international boxing icon will be an advantage in the Philippines’ battle to recover the ill-gotten wealth of the Marcoses.

(I know many people. When I go to other countries, I’m sure they know me so it’s an advantage for me as an international figure because they will respect our request to find the ill-gotten wealth.)

Unfair to single out Marcos family

But Pacquiao also said it is unfair to single out the Marcos family as there are many other corrupt politicians in the country. Nevertheless, he maintained that if any member of the Marcos family is convicted, he would follow and enforce the ruling of the court.

(It is unfair to single out the Marcos family. They are not the only ones here that are corrupt. We just want to be fair. I am not taking things personally. We are just fighting for what is right for the sake of the country and its progress.)