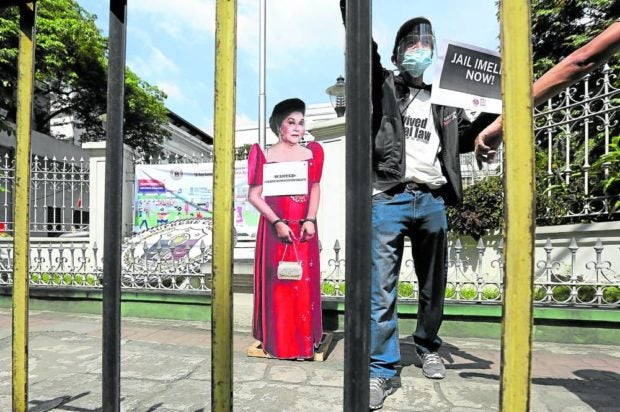 ‘WE CONTINUE TO SUFFER’: Victims of martial-law atrocities who gathered outside the Supreme Court on Tuesday bring with them a standee of Imelda Marcos, whose graft conviction they want the high court to affirm. (Photo by MARIANNE BERMUDEZ / Philippine Daily Inquirer)

MANILA, Philippines — Victims of human rights abuses during the Marcos dictatorship are calling on the Supreme Court to affirm the Sandiganbayan conviction of former first lady Imelda Marcos for seven counts of graft exactly three years ago.

Members of the Samahan ng mga Ex-Detainees Laban Sa Detensyon at Aresto (Selda), an organization of Marcos-era political prisoners, and of the Campaign Against the Return of Marcos and Martial Law (Carmma) issued the appeal in a letter to Chief Justice Alexander Gesmundo and during a protest action outside the Supreme Court compound on Tuesday.

“In the interest of justice for all victims of human rights violations during the martial law period, we again appeal to this honorable court to affirm Mrs. Imelda Marcos’ conviction by the Sandiganbayan,” the protesters said in their letter.

“We call on the sense of truth and justice of members of this honorable court and decide with dispatch to dismiss Mrs. Marcos’ appeal,” they added.

On Nov. 9, 2018, the Sandiganbayan antigraft court’s Fifth Division found Marcos guilty in seven graft cases, which were filed against her by state prosecutors between 1991 and 1995.

The charges were in connection with the diversion of more than $200 million in public funds to private foundations in Switzerland, which Marcos established while she was Metro Manila governor, assemblywoman and minister of human settlements during her husband’s strongman rule.

She was sentenced to six to 11 years in prison for each count of graft. The antigraft court also issued a warrant for her arrest and directed her to explain her absence at the promulgation of the decision.

The police did not move to arrest Marcos despite the warrant issued by the Sandiganbayan.

In a press briefing on Nov. 12, or three days after the conviction, then Philippine National Police chief Director General Oscar Abayalde said the police had to “take into consideration [Marcos’] age” as well as her “health.” She was then 89 years old.

Marcos, then a congresswoman representing Ilocos Norte, was also barred permanently from public office, although Commission on Elections spokesperson James Jimenez said at that time that she was still qualified to run while her conviction was under appeal.

Her lawyer, Manuel Lazaro, filed a motion for leave of court on Nov. 12, 2018, in a move to defer her arrest. Four days later, Marcos appeared before the Sandiganbayan to explain her absence at the promulgation, saying “I only attended [the party] because it’s her birthday. She [Imee Marcos] called me up begging, saying ‘all the guests are here.’”

“If I knew, I would have gone [to the Sandiganbayan],” she told the court.

Marcos was granted bail of P150,000 and had since appealed her conviction before the Supreme Court.

The protesters on Tuesday said they inquired last year about the status of Marcos’ appeal in a letter to then Chief Justice Diosdado Peralta, but that it was merely “noted without action.”

In their letter to Gesmundo, the protesters said: “Sir, we, the victims of the atrocities during Marcos’ martial law, have suffered enough. We continue to suffer as we witness Mrs. Marcos, the principal conspirator of the former dictator Ferdinand Marcos Sr., still out of jail, living a profligate lifestyle, shamelessly luxuriating with the money she and her family stole from the Filipino people, despite this conviction by the Sandiganbayan.”

In a separate statement, Selda vice chair and Carmma convener Danilo dela Fuente stressed that “the Sandiganbayan decision must be upheld. The amassing of ill-gotten wealth of the Marcoses was among the reasons why the nation has sunk deeper into poverty, ballooning debt, and crisis.”