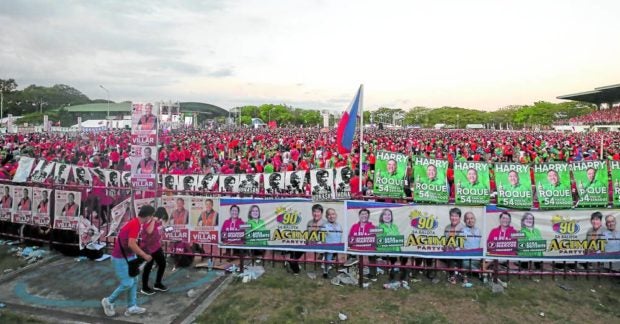 CAVITE RALLY | Supporters of presidential candidate Ferdinand Marcos Jr. and running mate Davao City Mayor Sara Duterte swarm the General Trias Sports Park in Cavite province on Tuesday. Gov. Jonvic Remulla says there were 100,000 inside the stadium and another 40,000 outside, but there was no police confirmation of the crowd size. (Photo by LYN RILLON / Philippine Daily Inquirer)

MANILA, Phlippines — Ferdinand “Bongbong” Marcos Jr. on Tuesday said he was “grateful and happy” over the “much-awaited and much-hoped for” endorsement of his presidential bid by President Rodrigo Duterte’s Partido Demokratiko Pilipino-Lakas ng Bayan (PDP-Laban) party.

“This new development, this will consolidate the forces of unity so that we can continue to work against those who would want to divide Filipinos against each other,” he told reporters in Tagaytay City after a meeting with village officials in Cavite.

The former senator said the PDP-Laban’s endorsement was an “important step” toward unity.

His running mate, Davao City Mayor Sara Duterte, disclosed that Marcos and her father met over the weekend before the PDP-Laban announced its endorsement.

The mayor, who is running as the vice presidential candidate of the Lakas-Christian Muslim Democrats (Lakas-CMD) Party, said she was also grateful for PDP-Laban’s support for her. The party faction led by Energy Secretary Alfonso Cusi announced it was endorsing her early this month.

She said she could not say what her father and Marcos discussed “because I was not there in the meeting.”

But she said she knew of an “agreement” between the Marcos camp and the PDP-Laban to support the former senator.

In November last year, the President publicly criticized Marcos as a “weak leader” and a “spoiled child” who was carrying “baggage.”

He also rejected a possible alliance between the PDP-Laban and Lakas-CMD because “Marcos is there.”

“I cannot speak for the president. I do not know what he’s thinking right now,” the Davao mayor said after she was pressed on whether Duterte was now supporting Marcos.

In a statement, Victor Rodriguez, spokesperson for Marcos, said the support from the President’s party was “reassuring” amid “growing rumors of possible poll fraud in the coming elections.”

Despite the endorsement, Rodriguez said Marcos would not be complacent “as the forces that try to put him down ever since, has not ceased, and apparently has even intensified their gutter ways.”

He said they were thankful that the PDP-Laban was joining “the crescendoing chorus of national unification.”

At a press conference on Tuesday, Cusi indicated that the President’s criticism of Marcos did not carry much weight as the son and namesake of the ousted dictator was chosen because he “is the candidate whose platform is most aligned with the development program” of Duterte.

Cusi could not say whether the party’s decision was tantamount to Duterte’s support for Marcos’ presidential bid.

Malacañang could not make a categorical statement either.

“It is clear that this is the decision of the party, but it is not clear if this is also what the President wants,” said acting presidential spokesperson Martin Andanar.

Cusi dismissed criticisms that the endorsement was against one of the party’s founding principles, when it was established in 1982, of fighting the dictatorship represented by Marcos and that they were now going beyond that.

“We are moving forward because if we always think of the past and we live by the past, nothing will happen to us. If we were rotten before, we will still be rotten now. We need to move forward,” he said.

As an administration party, the PDP-Laban was a “failure” because it was unable to produce a standard-bearer after being wracked by internal fighting, she said.

“They’re looking for candidates to adopt so it already betrays the weakness of the administration party,” Atienza said.She noted that the Cusi wing itself was divided because some of its members were supporting other presidential candidates.

The PDP-Laban has also eroded its credibility by endorsing Marcos despite its origins, she said.

Atienza also pointed out that no candidate for president endorsed by the ruling party, except Fidel V. Ramos, has won the elections since 1986.

Manhit said courting support from political parties could show that Marcos was “possibly concerned with the possible momentum being built” by his chief rival, Vice President Leni Robredo, or that he would like to “concretize his lead.”

“Political parties, especially if you’re the ruling party, are powerful,” he said.

Right now, the PDP-Laban is the strongest party because of the number of legislative districts and governors it has and they can provide the political machinery for the Marcos campaign, Manhit said.

“For me, you don’t need express endorsement [from the President] when you have a Cabinet secretary led by Cusi, it’s the wing that represents the President, and second, the daughter and some of the loyal supporters, are all with Bongbong campaign,” he said.

PDP-Laban gets flak for backing son of founders’ ‘nemesis’