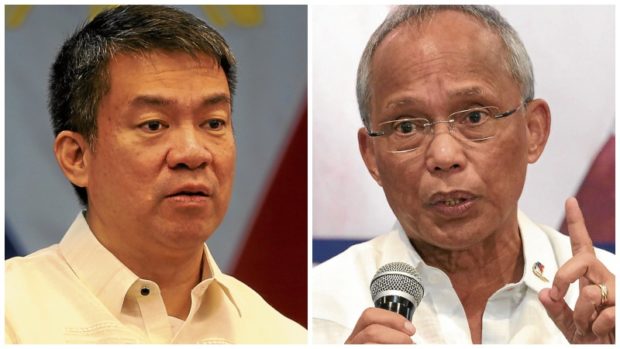 MANILA, Philippines — It makes no sense for a party that was established to oppose someone like Adolf Hitler to support his son, Sen. Aquilino “Koko” Pimentel III said in a blistering rebuke of a faction of the Partido Demokratiko Pilipino-Lakas ng Bayan (PDP-Laban) that endorsed presidential aspirant Ferdinand Marcos Jr.

The son of the late PDP founder and former Senate President Aquilino “Nene” Pimentel Jr. on Tuesday said Energy Secretary Alfonso Cusi and his supporters showed their true colors in backing Marcos, the son and namesake of the ousted dictator, because of his strong showing in pre-election polls.

The PDP-Laban was founded in 1982 by Pimentel’s father, who was incarcerated four times for opposing Marcos’ martial rule. It merged a year later with the Laban party of the late Sen. Benigno “Ninoy” Aquino Jr. to strengthen the anti-dictatorship forces.

“With this latest action from Secretary Cusi and his cohorts, they have manifested that they are total strangers to PDP-Laban,” Pimentel told reporters in a Viber group. “They don’t even acknowledge that PDP-Laban was established to oppose the Marcos dictatorship.”

According to the party’s ideology, its “traits” include standing “against dictatorship.”

Months before the filing of the certificates of candidacy in October last year, Cusi led a faction that claimed it had support from the majority of party members. The other party members remained loyal to then-acting party president Sen. Manny Pacquiao, another presidential candidate in the May 9 elections, and Pimentel, the former party president.

Pimentel said it was now time for the Commission on Elections (Comelec) to dismiss the petition of “these usurpers” to rule the party.

In his presidential bid, Pacquiao carries the banner of the Promdi party to avoid the complications of a contested party.

The PDP-Laban became the dominant party in the country after President RodrigoDuterte won the 2016 election.

‘Most aligned’ with Duterte

The Cusi faction, which is backed by Duterte, said in a resolution that Marcos “is the candidate whose platform is most aligned with the development program” of the president.

It earlier announced its support for Davao City Mayor Sara Duterte as the running mate of Marcos.

Pacquiao, who maintains he is still the party leader, denounced the move by the Cusi faction.

“Maybe Cusi forgot that the PDP-Laban was created against the Marcos regime,” he told reporters covering his campaign in Muntinlupa City on Tuesday.

“To members of the PDP-Laban, let us not follow Cusi. The PDP-Laban was formed against the Marcoses, and will now align with Marcos. That is a slap on the faces of PDP-Laban members,” Pacquiao said.

Bayan Muna chair and senatorial candidate Neri Colmenares said the Cusi faction’s endorsement of Marcos was a “grave betrayal” of the party that was formed to oppose the Marcos dictatorship.

“Ninoy and Nene must be rolling in their graves for this ultimate betrayal, which coincides with the party’s 40th anniversary and the 50th year since the imposition of martial law in the country,” Colmenares said in a statement.

“In their endorsement of Bongbong Marcos, the party leadership is spitting on themselves and the graves of more than 70,000 victims of martial law,” Colmenares said.

The former martial law student activist said the PDP-Laban’s support for a tax evader was against the principles upheld by the party, a reference to Marcos’s conviction in a tax case and his family’s refusal to pay a P203-billion estate tax.

“The PDP-Laban Cusi wing is now complicit in the historical distortion of the Marcos years. The party also stands to lose its legacy with this political hijack of the minions of the president,” he said.