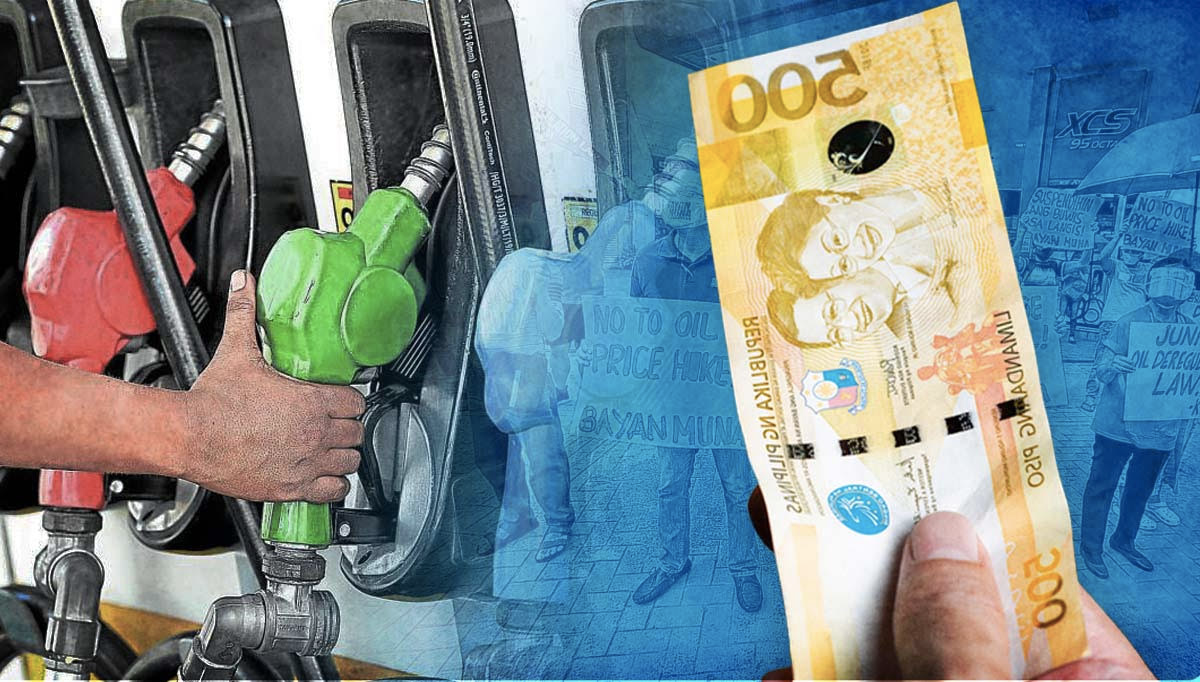 MANILA, Philippines—While 500 pesos, which President Rodrigo Duterte said should be given to the poor as subsidy amid surging commodity prices, looked like a lot compared to the initially proposed 200 pesos, the amount was “still far from what ordinary Filipinos need.”

This was stressed by the think tank IBON Foundation as the Department of Finance (DOF) was told to find a way to raise the proposed monthly assistance to ease the impact of rising oil prices. 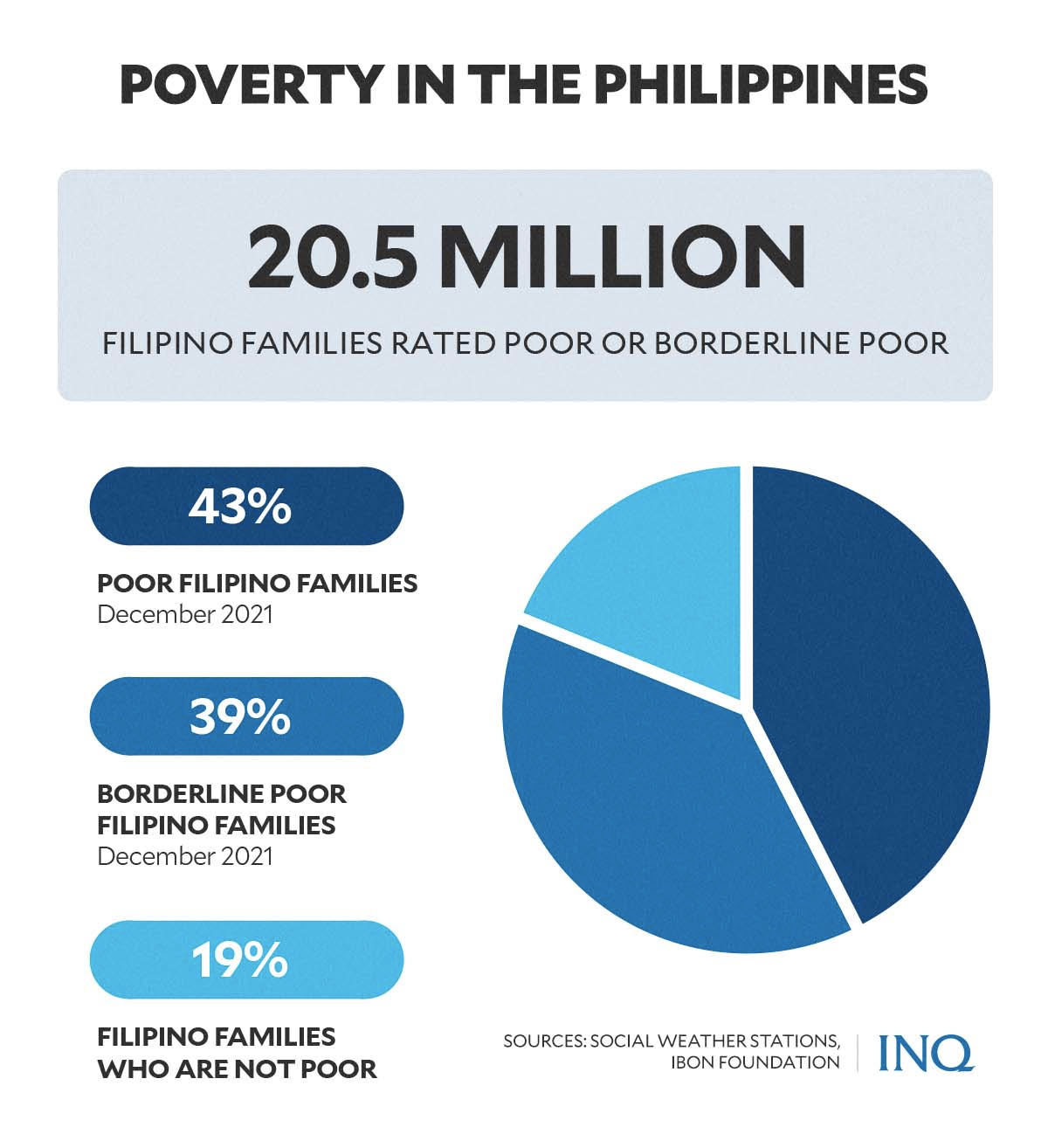 The President said on Monday (March 21) that 200 pesos will not be enough so he told Finance Secretary Carlos Dominguez III that while it will be a problem for the next president, he hoped that 500 pesos instead will “go a long way to help.” 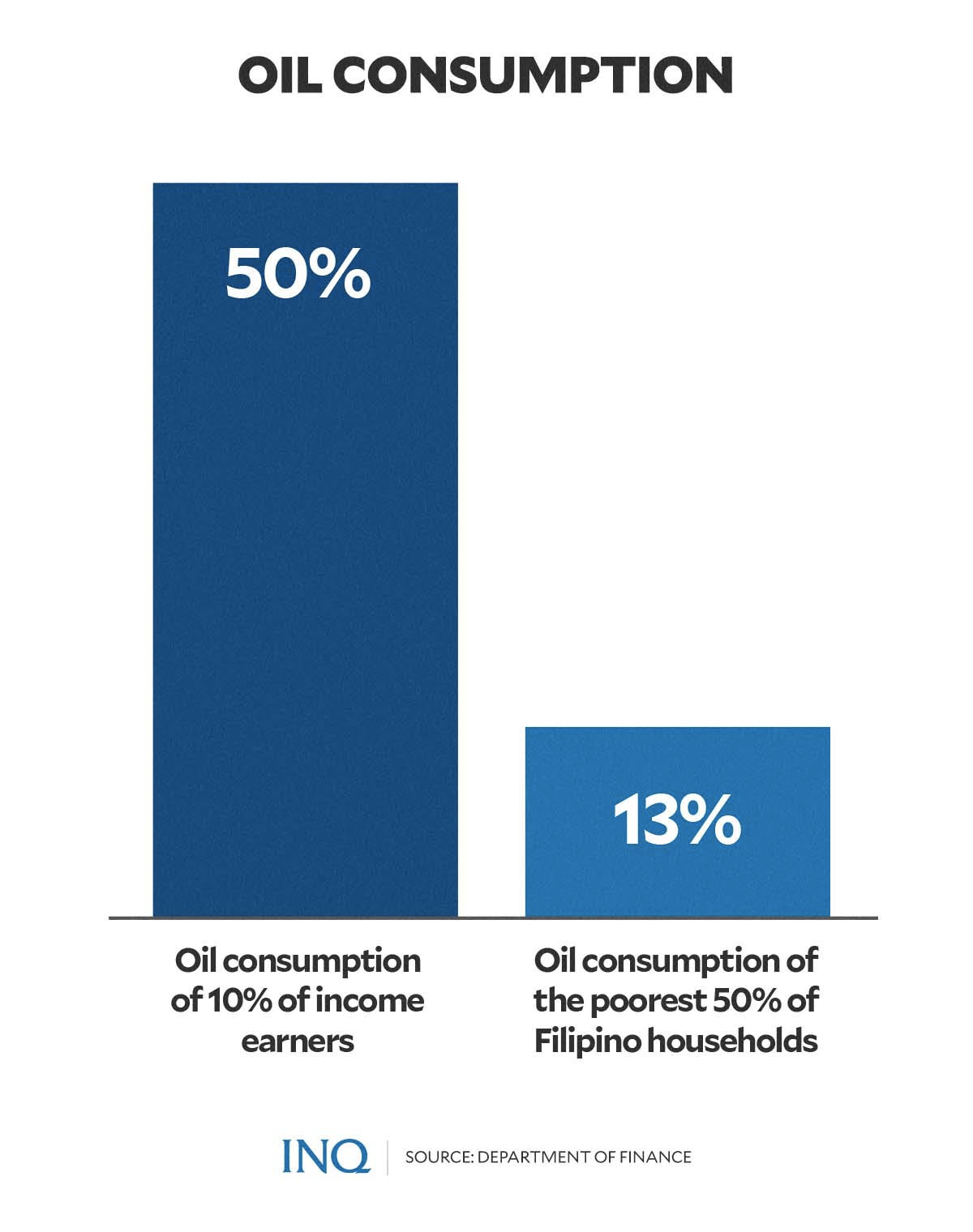 For Sonny Africa, executive director of IBON Foundation, the continuous outcry of Filipinos that 200 pesos will not be enough was apparently the reason Duterte proposed more than double the amount and asked his finance chief to look for funding sources. 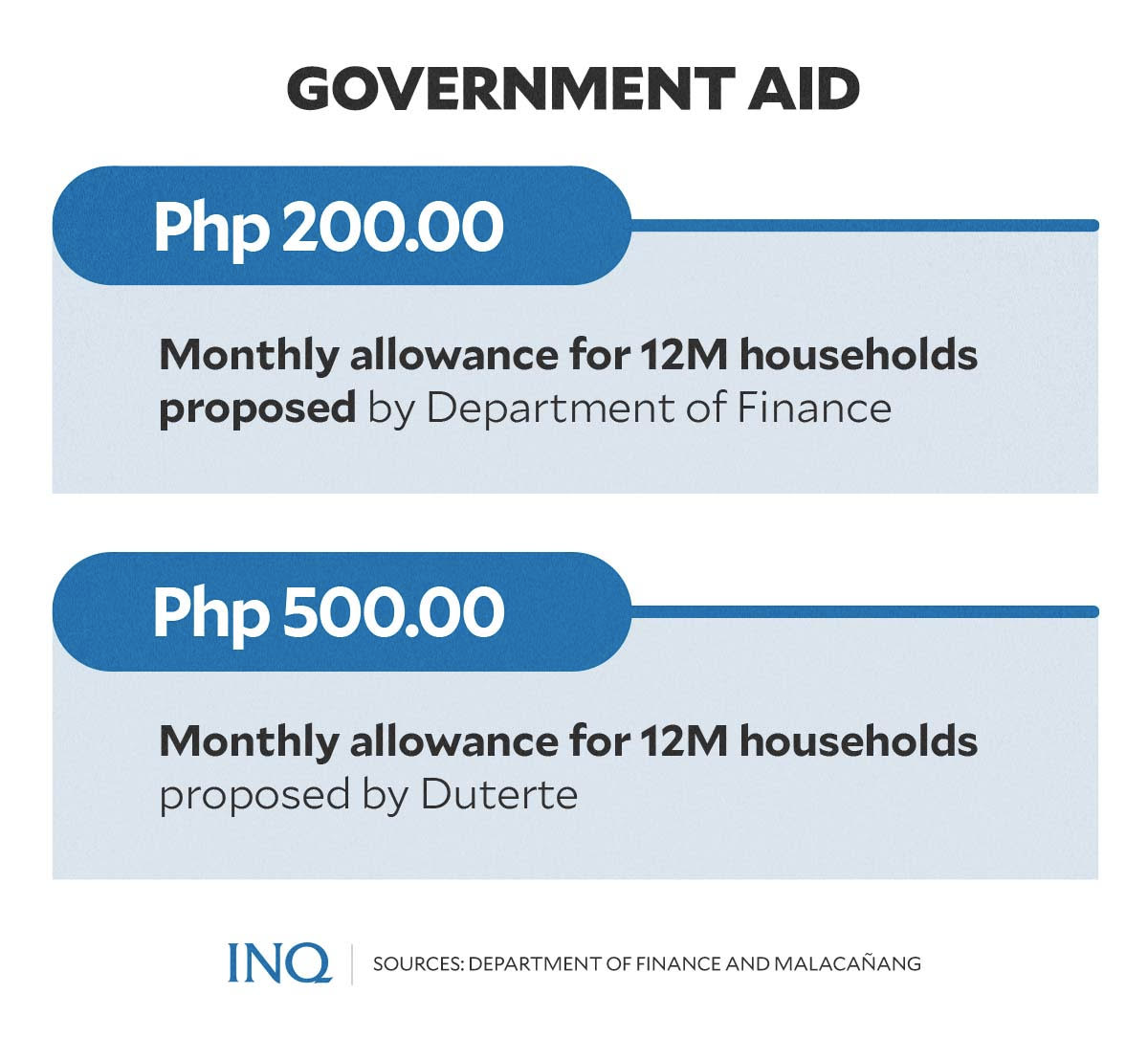 “We see exactly how easy it is for the government to do something if it chooses to. The President has vast powers and can go far in putting social policy in the right direction,” Africa told INQUIRER.net.

The DOF initially proposed the 200-peso monthly assistance to help the poorest Filipino households cope with the effects of rising oil prices. The program, which will last for one year, is worth P331.1 billion.

How did we get here?

As real, big-time oil price increases were felt last March 15, the Department of Energy said 11 consecutive oil price hikes this year translated to a net increase of P20.35 per liter of gasoline, P30.65 per liter of diesel and P24.90 per liter of kerosene. 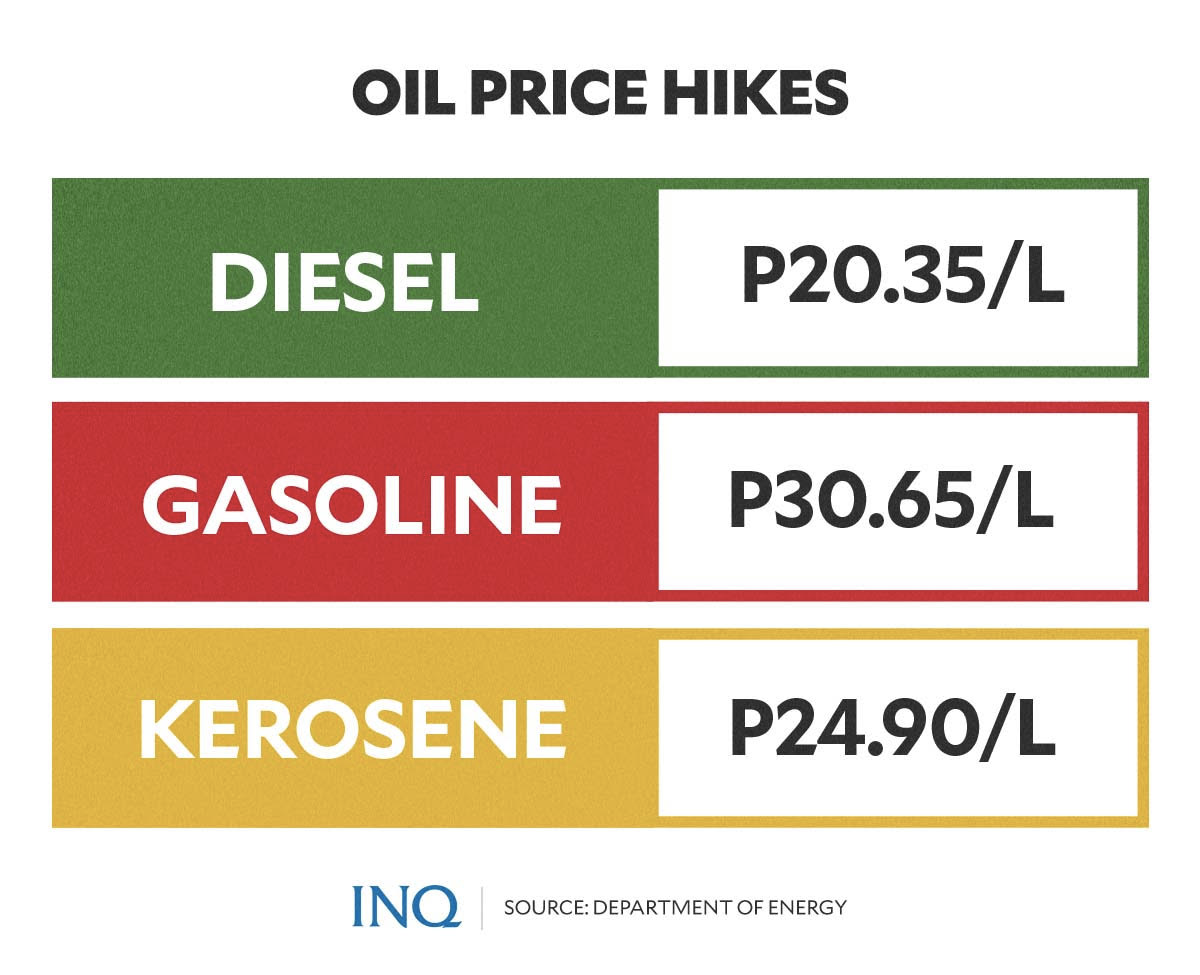 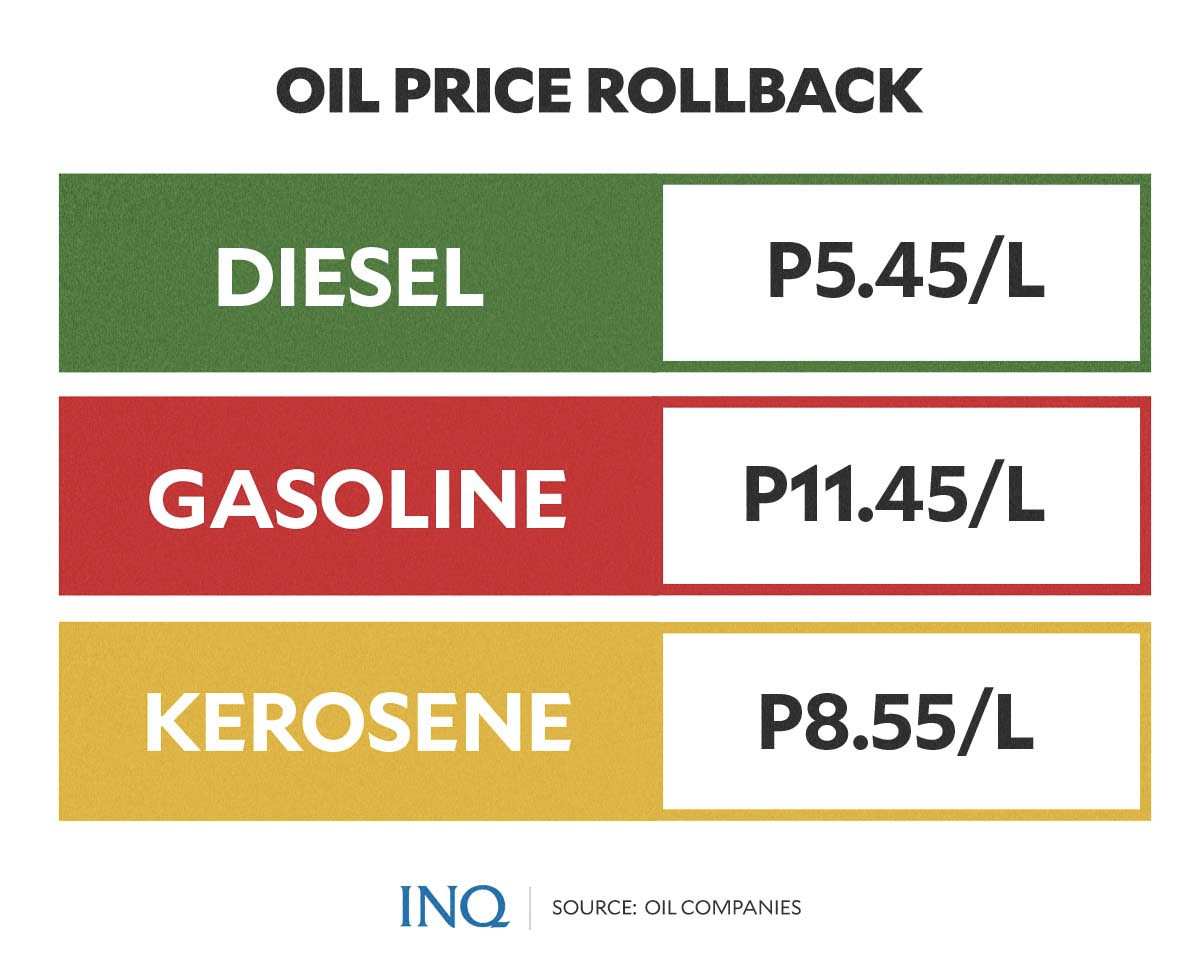 READ: Consumers get relief as oil firms cut down prices of fuel

Regina Capital managing director Luis Limlingan told ABS-CBN’s TV Patrol that the price movements showed volatility in global oil costs with the war in Ukraine started by Putin as one of the reasons.

The Department of Trade and Industry said that the effect of oil price hikes on the costs of basic commodities and services in the Philippines will be felt only after 90 days.

Economist Cielito Habito wrote in his INQUIRER column that the effects of oil price hikes are “far-reaching,” saying that the most prevalent are elevated energy and transportation costs.

For instance, drivers of public utility vehicles, like jeepneys, already asked the Land Transportation Franchising and Regulatory Board (LTFRB) for a P1 provisional fare hike and a possible P15 minimum fare.

The petition for a P1 provisional fare hike was denied by the LTFRB, saying that it balanced the rights of the riding public ““vis-à-vis the right of the operators to financial returns”.

While the Manila Electric Co. said the effect of the oil price hikes is yet to be reflected in its new rates, there’s already a P0.0625/kilowatt-hour rise because of higher charges and the depreciation of the peso against the US dollar.

Habito said there is a wide range of petroleum by-products that are already part of people’s lives—plastics, paints, fertilizers, pesticides, medicines, soaps, detergents, and even construction materials.

He stressed that one of the more concerning implications lately is the significant rise in fertilizer costs, saying that this threatens food production in two ways.

READ: Targeting: The way to go

Higher fertilizer prices raise the cost of producing food at the farm. This will likewise lead farmers to lessen, if not outright stop, its application, leading to lower farm productivity and lessened food supplies overall.

Habito, who said that Putin’s bid to destroy Ukraine has made things even worse, stressed that either way, “the world can expect significantly higher food prices in the near term.”

IBON Foundation said because of the oil price hikes, there has been a P2,000 additional cost of production for every hectare and that for the fisherfolk, oil is taking up 80 percent of the cost of operations. 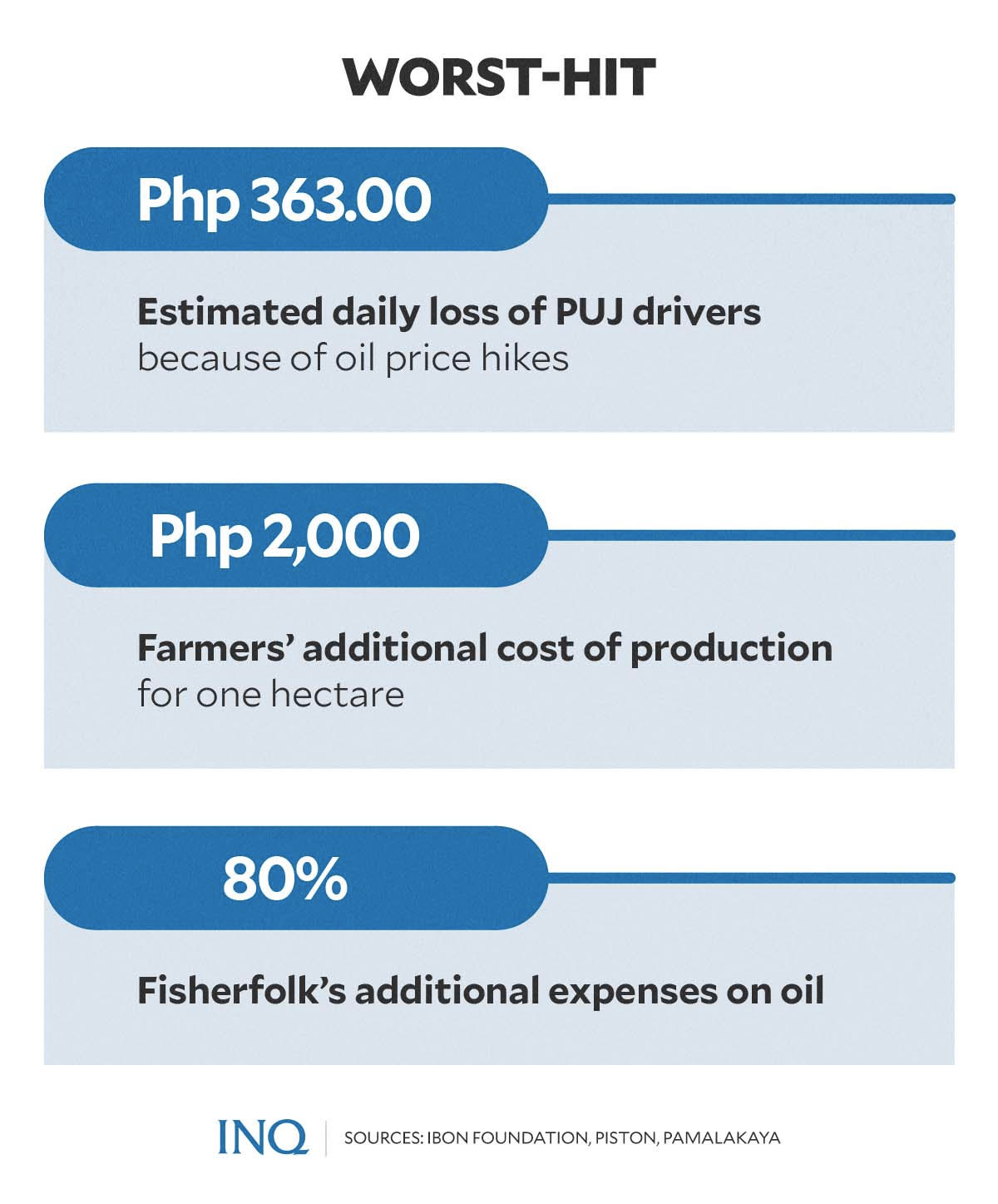 Likewise, the Pagkakaisa ng mga Samahan ng Tsuper at Operator Nationwide said rising oil costs hit incomes and livelihoods as jeepney drivers are losing up to P363 every day because of the oil price hikes.

READ: An insult to the poor

Since these are expected to sink Filipinos in poverty even deeper, especially the poor, assistance from the government will greatly help. But as Anakpawis party-list group said, the initially proposed 200 pesos was like an “insult”.

For Africa, the 500 pesos will only make up for inflation and the increase in prices since April last year. He said it isn’t even half of the P1,000 every month that Metro Manila minimum wage earners have lost since July 2016. 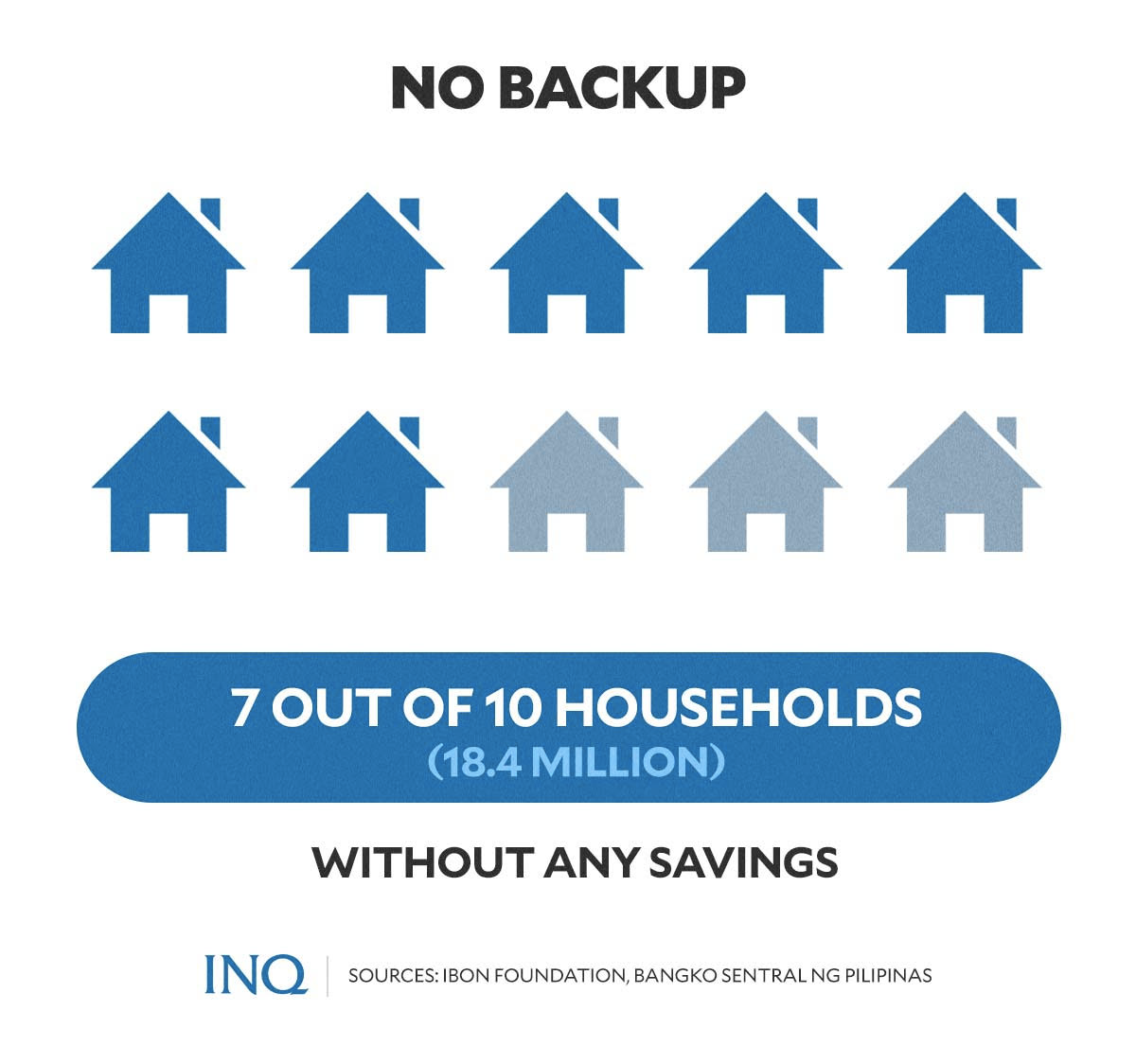 IBON Foundation said on March 4 that a family of five in Metro Manila needs P1,072 every day or P25,252 every month to live decent lives. This, as the minimum wage in the metropolis is still P537.

The DOF said the subsidy program that will last for one year will “benefit” 12 million households which comprise 70 million people. However, Africa said the amount of beneficiaries is “too small.”

He stressed that it should be 70 to 80 percent of the poorest households, especially when considering that seven out of 10 or 18.4 million households don’t even have any savings.

This, as the Philippine Statistics Authority said “labor force participants” fell by 3.6 million from December last year—from 49.5 million to 45.9 million. Likewise, there was a 3.3 million drop in employed persons—from 46.3 million to 43 million.

As the Social Weather Stations showed in its latest survey results, there were 82 percent of families who considered themselves poor—43 percent “poor” and 39 percent “borderline poor”.

Habito explained that to respond to all of of these, especially now that the economy and Filipinos are barely recovering from the recession, “solutions we pursue must adhere to these two basic principles”:

Based on both principles, the clamor for the suspension of excise on fuel is not the right answer. “A one-year suspension would dent government finances by about P170 billion,” he said. 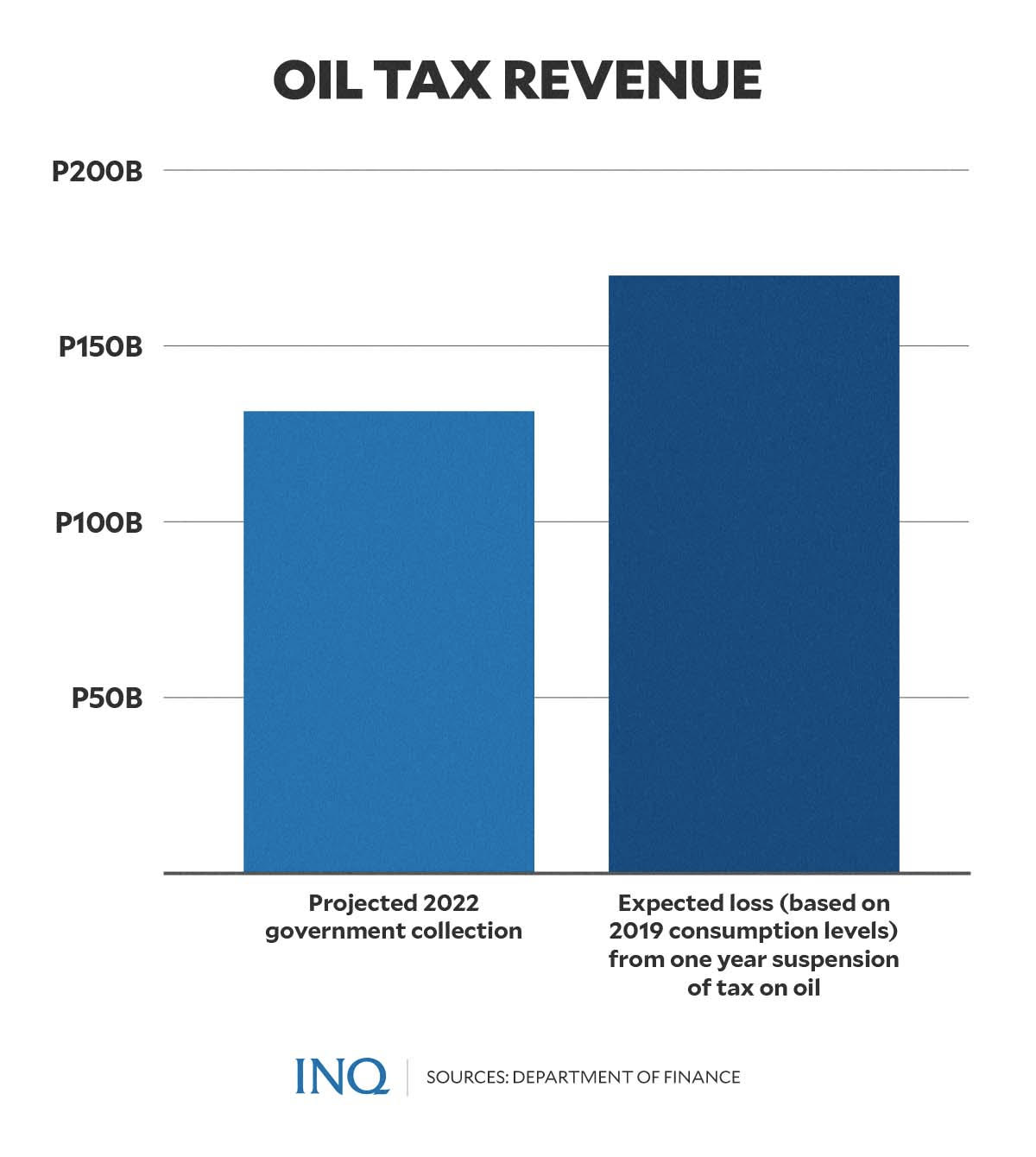 Dominguez said the suspension of excise on oil would cost the government P105.9 billion in foregone revenues this year, saying that it was programmed to collect P131.4 billion in oil taxes.

He said it would put further pressure on the national government’s already strained fiscal state—the projected foregone revenues would bloat the budget deficit to 8.2 percent of gross domestic product instead of 7.7 percent.

Currently, the excise is P10 per liter of gasoline, P6 per liter of diesel, and P5 per liter of kerosene. Habito said removing the oil tax would “needlessly benefit high-income consumers as well.” For Dominguez, removing the tax will greatly benefit people who have cars. They are the rich people. He said it will be “inequitable” for the bottom 50 percent of Filipinos.

“We know that the top 10 percent of income earners in the Philippines consume almost 50 percent of all the fuel [while the] bottom 50 percent, they consume only 13 percent,” he said.

For Habito, “it would cost far less to provide targeted subsidies for farmers and public transport operators, and avoid helping moneyed motorists needlessly.”

Africa said a P10,000 assistance for at least one to two months is still very much called for, stressing that it will also be a significant fiscal stimulus for the economy that will go far in paying for itself.

He said the Bayanihan 3 proposal from last year should be revisited and revised with developments in the COVID-19 crisis and livelihoods since it was drafted.

This includes increasing emergency cash assistance to boost what is clearly a “stumbling economy,” saying that the huge 3.3 million decline in employment in January 2022 from the month before should start ringing alarm bells.