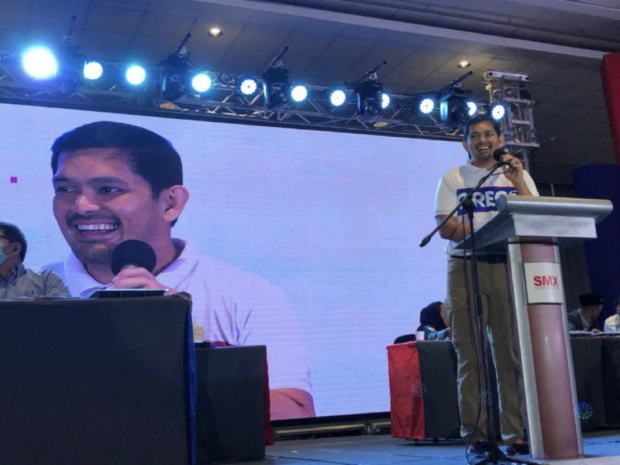 Senatorial candidate Greco Belgica speaks to the crowd during one of his campaign sorties. Contributed photo

MANILA, Philippines — Senatorial candidate Greco Belgica said the Philippines will have to start to invest on nuclear research just in case the war escalates, saying we don’t want to get caught in the middle of “someone else’s” war.

“The whole world is talking about nuclear warheads and they have it in Japan, China, Korea.”

Belgica said the country will have to be prepared and capable should there be military hostilities in the region similar to the ongoing war between Russia and Ukraine.

“Our concern is for the government to strengthen our defense capabilities and assert its leadership in the geopolitical realm, to bring everyone to the diplomatic table and talk peace, but at the same time prepare for war,” he said.

“Hindi naman tayo pakikinggan nyan [They would probably not listen to us] if we cannot defend ourselves.”

To do that, legislators will have to earmark a huge chunk of budget to enhance the Philippines military capabilities, he said.

“This for me is  top priority. Wala tayong mapaguusapang economic progress pag may giyera.”

(We need funds to buy equipment, ground-to-air missiles, intelligence equipment, and we need to put up our own nuclear facility. We can’t talk about economic progress if there is war.)

Read Next
Pentagon says it will help gather evidence of Russian war crimes in Ukraine
EDITORS' PICK
Do all the things you do, faster
Motorcycles, smartphones, and cash prizes up for grabs in TNT’s ‘Tuloy Ang Saya’ Raffle in Mindanao
House energy committee chair Arroyo bats for cheap electricity
NCR at increased COVID risk again
New PS-DBM director says DepEd laptop MOA ‘not legal’
House okays budget; ways to go in Senate
MOST READ
Robredo’s tarpaulin portrait at Palace just a ‘placeholder’
Shopee PH gets flak for getting Toni Gonzaga
Robredo supporter tackles elephant in room: No massive fraud in 2022 polls, surveys were just right
DepEd: We are in a crisis situation in education sector
Don't miss out on the latest news and information.