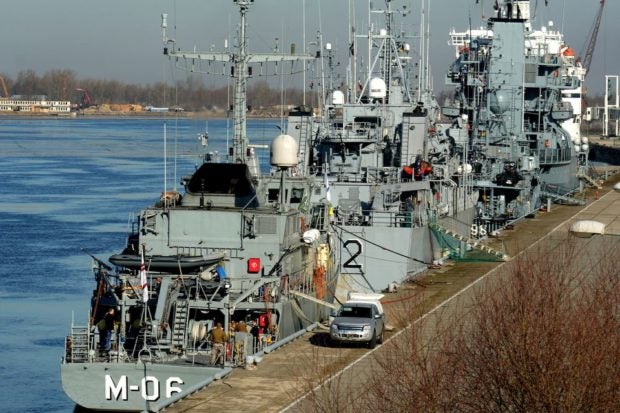 ON BOARD THE SUPPLY SHIP ELBE, Latvia — Hours after Russian missiles first struck Ukrainian cities on Feb. 24, German naval commander Terje Schmitt-Eliassen received notice to sail five warships under his command to the former Soviet Republic of Latvia to help protect the most vulnerable part of Nato’s eastern flank.

The hasty dispatch was part of Germany’s scramble to send “everything that can swim out to sea,” as the navy’s top boss phrased it, to defend an area military strategists have long deemed the weakest point for the alliance. The vessels’ sudden departure demonstrated how Nato, and Germany, were propelled by Russia’s invasion into a new reality and face what officials, diplomats, intelligence officials and security sources agree is the most serious threat to the alliance’s collective security since the Cold War.

Schmitt-Eliassen, who is based in the German Baltic port of Kiel, spoke to Reuters on the flight deck of the supply ship Elbe. Moored next to it, within sight of the church towers of the Latvian capital Riga, were a Latvian and a Lithuanian ship, and vessels and sailors from nations including Denmark, Belgium and Estonia were due to join the group later.

A total of 12 Nato warships with some 600 sailors on board are due to start a mine-clearing operation in the coming days.

It looks a lot like a return to the past. Founded in 1949 to defend against the Soviet threat, the Nato alliance is facing a return to mechanized warfare, a huge increase in defense spending, and potentially a new Iron Curtain falling across Europe. After struggling to find a new post-Cold War role, countering terrorism following the Sept. 11 attacks on the United States in 2001 and a humiliating withdrawal from Afghanistan in 2021, Nato is back defending against its original nemesis.

But there’s a difference. China, which split with the Soviet Union during the Cold War, has refused to condemn the Russian invasion of Ukraine, which Moscow calls a “special military operation.” And the old Cold War blueprints no longer work, as Nato has expanded east since the 1990s, bringing in former Soviet states – including the Baltic states of Latvia, Lithuania and Estonia in 2004.

Direct confrontation between Nato and Russia could touch off a global conflict.

“We have reached a turning point,” said retired German general Hans-Lothar Domroese, who led one of the highest Nato commands in the Dutch town of Brunssum until 2016.

“We have China and Russia acting in concert now, boldly challenging the United States for global leadership … In the past, we have been saying deterrence works. Now we have to ask ourselves: Is deterrence enough?”

This is underscored by Schmitt-Eliassen’s mission – a regular exercise that was brought forward by Russia’s invasion.

Today, Nato’s and Russia’s roles have been reversed: An emboldened Moscow could encircle Nato’s new Baltic members, and cut them off from the alliance. If a new Iron Curtain is to fall, Nato needs to ensure its members are not behind it. 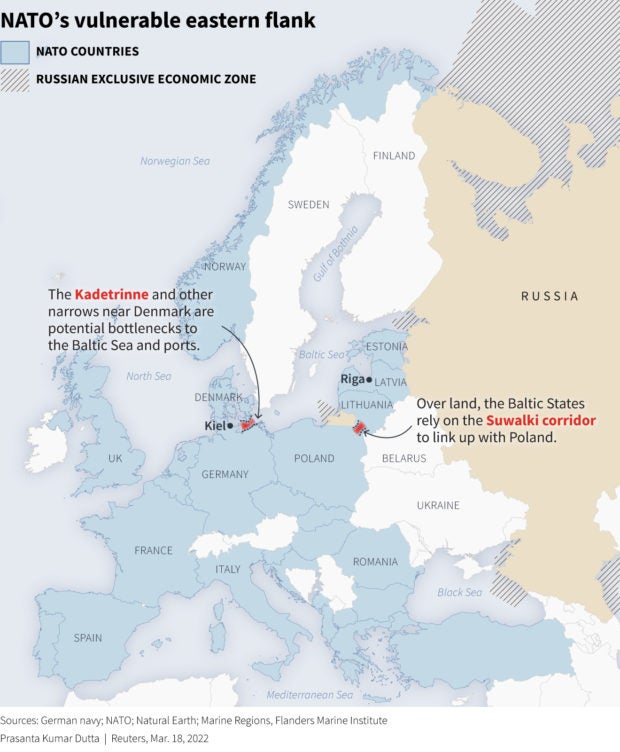 The three tiny countries, with a combined population of some six million people, have a single overland link to the alliance’s main territory. A corridor of some 65 km (40 miles) is squeezed between the heavily armed Russian exclave of Kaliningrad on the west and Belarus on the east.

So Schmitt-Eliassen’s goal is to keep the waterway open, as a supply line also for non-Nato states Finland and Sweden. Millions of tons of old mines, ammunition and chemical weapons are believed to lie on the bed of the shallow Baltic Sea, a legacy of two World Wars.

Mines – whether old and unexploded or freshly laid – can have an impact beyond destruction, Schmitt-Eliassen said. A mine sighting, or rumoured sighting, can close harbors for days while the area is swept. If that happens in the Baltic, there’s a risk “the supermarket shelves will remain empty.”

Even commercial ships can become a military factor in the narrow western entrance to the Baltic, he said, referring to scenarios such as the March 2021 incident when the Ever Given container ship blocked traffic through the Suez Canal for days.

“You cannot blame anybody for this (kind of incident), it is not attributable,” the chief of the German navy, vice-admiral Jan Christian Kaack, told Reuters.

Crucial for the Baltics is the land link between Kaliningrad and Belarus. Called the Suwalki Gap, its seizure would cut the Baltic states off.

“Putin could quickly seize the Suwalki Gap,” said Domroese, the retired German general, adding this will not happen today or tomorrow, “but it could happen in a few years.”

Putin’s recent actions have not all been predictable. He put Russia’s nuclear forces on high alert on Feb. 28, with rhetoric that Stoltenberg told Reuters is “dangerous, it’s reckless.”

The Kremlin did not respond to a request for comment. Putin says Russia’s concerns expressed over three decades about Nato’s expansion were dismissed by the West, and post-Soviet Russia was humiliated after the 1991 fall of the Soviet Union.

He says Nato, as an instrument of the United States, was building up its military on Ukraine’s territory in a way that threatened Russia.

On March 11, Russia’s Defense Minister Sergei Shoigu told Putin the West was beefing up military forces close to Russia’s Western borders. Putin asked Shoigu to prepare a report on how to respond.

Ukraine’s President Volodymyr Zelinsky has warned that the Baltic states will be Russia’s next target. The Baltic Sea is a large and busy shipping market for containers and other cargo, connecting Sweden, Finland, Estonia, Latvia, Lithuania and Russia with the rest of the world.

It “has gone from being a normal peaceful area, to an area where you tread carefully,” said Peter Sand, chief analyst at the air and ocean freight rate benchmarking platform Xeneta. With demand and logistics disrupted, the fees shippers pay to move cargoes from Hamburg to Saint Petersburg and Kaliningrad are down 15% since the invasion, according to Xeneta data.

For almost 25 years, the West believed Russia could be tamed by diplomacy and trade to maintain stability and security in Europe. In 1997, Nato and Russia signed a “founding act” that was designed to build trust and limit both sides’ force presence in eastern Europe.

The alliance also sought to build a partnership with Russia, which took part in Nato exercises in the Baltic as recently as 2012, according to retired U.S. Admiral James Foggo, who commanded U.S. and Nato fleets in Europe for almost a decade until 2020.

After Russia annexed Crimea in 2014, Nato created small, multinational combat units in Poland and the three Baltic states, which serve as a forward presence to deter Moscow. But the force numbers are designed not to violate the “founding act,” which has hindered Nato’s ability to move troops into the Baltics and Poland on a permanent basis.

“We all thought that there wouldn’t be an enemy anymore,” Admiral Rob Bauer, the chairman of Nato’s military committee, told Reuters. “We now are confronted with a nation that is showing that it is aggressive, that it has forces that we thought were not going to be used anymore.”

While the numbers are changing all the time, the number of troops under the command of Nato Supreme Allied Commander in Europe (SACEUR) Tod Wolters has more than doubled since Russia’s invasion, to around 40,000, according to Nato diplomats and officials.

NATO allies have also moved five aircraft carriers into European waters, in Norway and the Mediterranean, increased the number of warplanes in the air in Nato airspace and more than doubled the size of the combat units in the Baltics and Poland. Host nation forces number some 290,000 in the region, but mainly under national control.

The biggest shift in Nato’s “new normal,” diplomats, former officials and experts say, is Germany’s reversal of a decades-long policy of low defense spending. Held back by guilt over its wartime past and resulting pacifism among its population, Germany resisted pressure from the United States to increase this to a Nato target of 2% of economic output. France and Britain both meet the goal, but Germany’s defence spending was only 1.5% in 2021.

With ageing equipment and personnel shortages, Berlin had been seen for decades as a weak partner because of its reluctance to send troops to combat operations.

But on Feb. 27, Chancellor Olaf Scholz said Berlin would now meet the 2% target – and promised a 100 billion euros ($110 billion) injection into the military.

Germany has been concerned by Moscow’s presence in the Baltic Sea for a while. After Russia’s annexation of Crimea, Berlin forged an alliance of the western navies on the Baltic Sea.

“We simply had to take note of the fact that – whether we like it or not – we are the 900 pound gorilla in the ring,” said navy chief Kaack. “The way we look up to the United States as a smaller partner, that’s how our partners here look at us.”

The United States is also moving more military equipment into Europe, including vehicles and weapons to Belgium, the Netherlands, Germany and Poland that could be used immediately by newly arriving U.S. troops, rather than waiting weeks for tanks and trucks to be shipped from U.S. bases.

Douglas Lute, a former U.S. ambassador to Nato, told Reuters that Nato’s “new normal” should be a step up from what the alliance agreed after Crimea. It is likely to be set down in writing in Nato’s official master strategy document, known as its “Strategic Concept,” which will be agreed at the next Nato summit in Madrid in June.

“You’ll see a push forward of combat capability to both reassure eastern allies and to make an even more prominent deterrence message to Russia,” Lute said.

And he expects more U.S. weapons and military equipment to be pre-positioned in Europe. More Nato troops could be stationed in Romania, Bulgaria, Slovakia and Hungary.

The U.S. delegation to Nato declined to comment. Its envoy, Julianne Smith, said on March 15 the alliance was making commitments to “have more force posture in Central and Eastern Europe and develop new policy tools.”

But – just as in the Cold War – Nato will need to keep communicating with Russia to avoid risking accidents with potentially devastating consequences.

“Nato has some responsibility to do more than just trying to keep Russia out,” said Adam Thomson, a former British ambassador to Nato and now director of the European Leadership Network think tank in London. “It’s about the management of an unavoidable strategic instability.”

Read Next
Belgica wants PH to have nuclear capability in case war erupts
EDITORS' PICK
What to watch out for when selecting a video surveillance solution
Heads may roll at BOC, says Palace if sugar smugglers are allowed to use recycled import permits
vivo brings to the Philippines a powerful smartphone with a slimmer body, the vivo Y02s for only PHP 6,499
DOH reports increase in daily COVID-19 deaths, mostly unvaxxed
Palace: Biggest supermarkets in PH commit to sell sugar at P70 per kilo
House energy committee chair Arroyo bats for cheap electricity
MOST READ
DepEd to give teachers P5K cash allowance within first week of classes
Alyssa Valdez to miss Creamline’s AVC Cup campaign
Brian Poe-Llamanzares receives his PhD in Public Administration
Ambulance driver dies of heart attack en route to pick up patient in Biliran town
Don't miss out on the latest news and information.