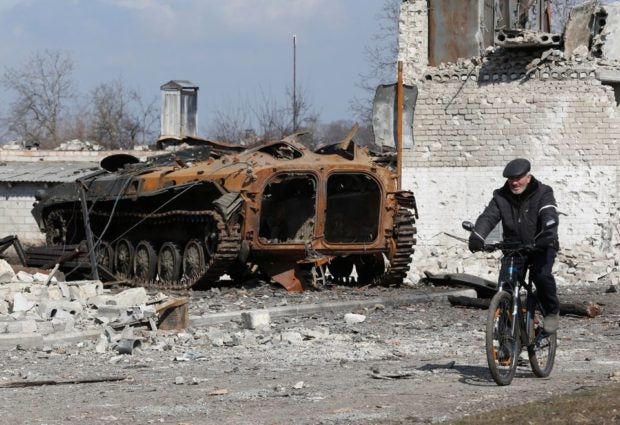 A local resident rides a bicycle past a charred armoured vehicle during Ukraine-Russia conflict in the separatist-controlled town of Volnovakha in the Donetsk region, Ukraine March 15, 2022. REUTERS

Ukraine has defied Russia’s demand for soldiers to lay down arms in Mariupol, where civilians are besieged in a city being laid to waste by bombardment.

Russia’s almost month-old assault on Ukraine has stalled along most fronts, failing to seize any major city or topple the government. But shelling and missiles are causing devastation.

* Russian artillery continues to pound the eastern cities of Kharkhiv, Sumy and Chernihiv.

* But the focal point is Mariupol, a strategically important southern port. There, horror and bewilderment stalk the devastated, Russian-besieged city, where some bury neighbours in roadside graves.

* Nearly 6.5 million people have been uprooted from homes, the United Nations says. Just over 8,000 people were evacuated on Monday.

* The European Union cannot agree on whether or how to slap sanctions on Russia’s lucrative energy sector. Germany says the bloc is too dependent on Russian oil for that.

* Peace talks resumed but there is no sign of significant progress.

* The U.N. General Assembly is expected to vote again this week on a motion criticising Russia for the humanitarian crisis in Ukraine.

* “It is a senseless massacre where every day slaughters and atrocities are being repeated,” Pope Francis said.

* “Everything is destroyed. Where can we go?” asked librarian Irina Chernenko in a dark cellar in Mariupol packed with families for 11 days.