10 million have fled their homes in Ukraine – UN | Inquirer News

10 million have fled their homes in Ukraine – UN 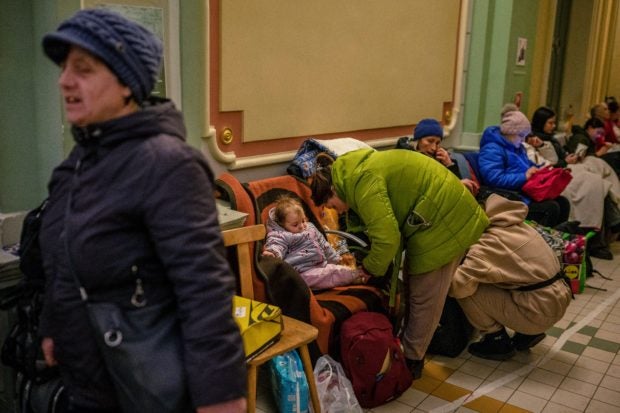 An Ukrainian evacuee dresses a child in the hall of the main railway station in Przemysl, near the Polish-Ukrainian border, on March 20, 2022, following Russia’s military invasion launched on Ukraine. AFP

GENEVA — Ten million people — more than a quarter of the population — have now fled their homes in Ukraine since Russia’s invasion, the United Nations refugees chief said Sunday.

UNHCR, the UN Refugee Agency, said nearly 3.4 million of the total had fled to neighboring countries, mostly to the Polish border.

“Among the responsibilities of those who wage war, everywhere in the world, is the suffering inflicted on civilians who are forced to flee their homes,” UNHCR chief Filippo Grandi said, implicitly holding Russia.

“The war in Ukraine is so devastating that 10 million have fled, either displaced inside the country, or as refugees abroad,” he said.

UNHCR, the UN refugee agency, said Sunday that 3,389,044 Ukrainians had fled across the country’s borders since Russia invaded on February 24.

Another 60,352 joined the exodus since Saturday’s update, a flow roughly the same as the day before.

Some 90 percent of those who have fled are women and children. Ukrainian men aged 18 to 60 are eligible for military call-up and cannot leave.

Unicef, the UN children’s agency, said more than 1.5 million children are among those who have fled abroad, warning that the risks they face of human trafficking and exploitation are “real, and growing”.

The UN’s International Organization for Migration (IOM) also said that as of Wednesday, 162,000 third-country nationals had fled Ukraine to neighboring states.

Millions more have fled their homes but remain within Ukraine’s borders.

Some 6.48 million people were estimated to be internally displaced within Ukraine as of Wednesday, according to UN and related agencies, following an IOM representative survey.

Before the conflict, Ukraine had a population of 37 million in the regions under government control.

Here is a breakdown of which neighboring countries Ukrainian refugees headed to, according to UNHCR:

Six in every 10 Ukrainian refugees — 2,050,392 so far — have crossed the Polish border, according to UNHCR’s latest figures.

Many of those heading west from Ukraine into Poland, Hungary and Slovakia then travelling further on into other nations in Europe’s Schengen open-borders zone.

“We estimate that a large number of people have moved onwards to other countries,” UNHCR said.

UNHCR said 527,247 Ukrainians had made their way into Romania, including a large number who have crossed over from Moldova, wedged between Romania and Ukraine, to reach the EU member state.

The vast majority are thought to have made their way onto other countries further into Europe.

The Moldovan border is the nearest to the major port city of Odessa.

UNHCR said 362,514 Ukrainians had crossed into the non-EU state, one of the poorest in Europe. Most transit through the small nation, en route westwards to Romania and other countries beyond.

Doctors Without Borders (MSF), at the Palanca crossing — the closest to Odessa — said thousands were arriving daily.

The medical charity said the majority coming through were currently refugees fleeing the Russian attacks on Mykolaiv, the next major city along the Black Sea coast — and were people anxious to cross the border.

Local volunteers “welcome them with tea and food, and some tents to shelter them from the wind”, MSF said.

It reported men dropping off women and children in cars and then leaving for the front.

Hungary has five border posts with Ukraine and several frontier towns, including Zahony, where local authorities have turned public buildings into emergency centers for refugees.

A total of 245,569 Ukrainians made it across the country’s shortest border into Slovakia.

Some 184,563 refugees have sought shelter in Russia since the invasion began.

In addition, UNHCR said 50,000 people had crossed into Russia from the separatist-held pro-Russian Donetsk and Lugansk regions of eastern Ukraine between February 21 and 23.

And 2,548 refugees have made it north to Belarus, UNHCR says.