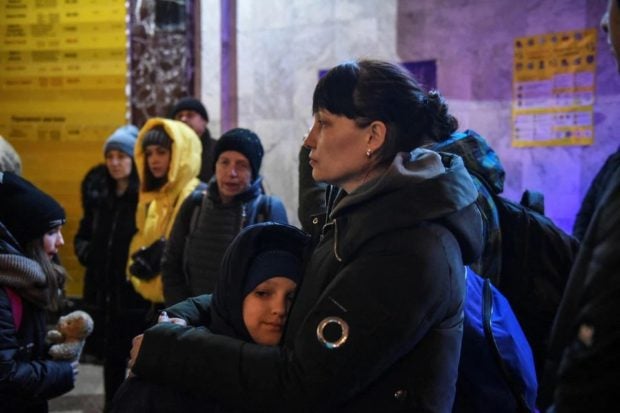 Ludmila Lichko, 40, from Mykolaiv, hugs her son Ivan, 9, as civilians fleeing Russia’s invasion of Ukraine wait to board an evacuation train, in Odesa, Ukraine, March 16, 2022. REUTERS

ODESA, Ukraine — Ludmila Lichko wearily cradles her nine-year old son Ivan aboard a crowded train as it pulls out of Ukraine’s Black Sea port of Odesa just before midnight and heads south towards the Romanian border, moving away from the war engulfing their country.

Fleeing with Ivan and her other son, 16-year-old Vladislav, Lichko can think only of her husband Denis, an engineer, who has stayed behind in their home city of Mykolaiv to fight invading Russian forces.

“It was very hard for us to separate but we just had to leave. It is impossible to live in such conditions the whole time,” said Lichko, a 40-year-old social worker.

Lichko described having to live in basements and listen every day to the wailing of air raid sirens and explosions.

“There were already air strikes where we lived. The neighboring village… suffered a lot from bombing… That’s very scary. That’s why we decided to leave,” she said.

Lichko left Mykolaiv on March 16 by bus on the 120-kilometre (75 mile) journey to Odesa, an elegant old city in southwest Ukraine that has so far largely escaped the fighting, though its train station witnesses daily scenes of families being torn apart by the war.

Many refugees no longer feel safe in Odesa. Local authorities accused Russian forces on Monday of conducting their first strike on the city, saying it had hit residential buildings on the outskirts. Nobody was hurt.

Russia denies targeting civilians in what it calls a “special military operation” to disarm Ukraine.

The train passengers – mostly women and children – share stories and snacks in the dimly lit cabins. Some have brought pets, like Odesa pensioner Laris Levchenko with her dog Danya.

Five hours later, the refugees leave the train at Izmail. Lugging bags and clasping hats and coats against the biting wind, they struggle aboard a bus that takes them to the Danube port of Orlivka where they catch a ferry at dawn across the river to Isaccea in Romania.

Even now the Lichko family cannot rest. Their final destination is Poland, where relatives are waiting for them.

“They can take us in for some time. Further on, if the situation calms down… we will return to our home,” she said.

Poland has taken in about 2.1 million of the nearly 3.4 million Ukrainians who have fled abroad in just over three weeks since the Russian invasion started on Feb. 24.

“We all agree that we want to rebuild what was destroyed, so that everything can return to normal,” Lichko said.

Read Next
EU split on Russia oil sanctions, mulls other steps
EDITORS' PICK
Do all the things you do, faster
Motorcycles, smartphones, and cash prizes up for grabs in TNT’s ‘Tuloy Ang Saya’ Raffle in Mindanao
House energy committee chair Arroyo bats for cheap electricity
NCR at increased COVID risk again
New PS-DBM director says DepEd laptop MOA ‘not legal’
House okays budget; ways to go in Senate
MOST READ
Shopee PH gets flak for getting Toni Gonzaga
Robredo’s tarpaulin portrait at Palace just a ‘placeholder’
Robredo supporter tackles elephant in room: No massive fraud in 2022 polls, surveys were just right
DepEd: We are in a crisis situation in education sector
Don't miss out on the latest news and information.