LGBTQ+ Ukrainians fight for their country and their rights | Inquirer News 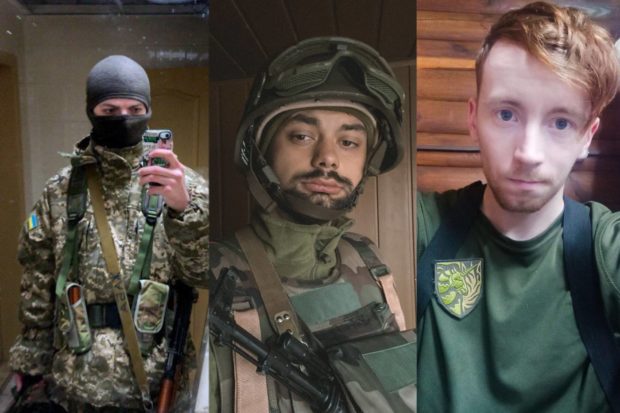 Before Russia invaded Ukraine three weeks ago, Oleg used to get up early every day to walk his dogs along the wide, French-inspired boulevards of the capital, Kyiv.

He had been planning a cycling trip to Odessa on the country’s Black Sea coast.

But three days after Russian tanks rolled across the border, Oleg, a 22-year-old bisexual man and former beer sommelier, began a very different life – signing up to serve in the Ukrainian armed forces along with his father.

“My favorite places in Kyiv are now in ruins,” said Oleg, whose mother and younger brother managed to flee to Germany, joining more than 3 million Ukrainians who have left the country since Russia invaded on Feb. 24.

“I try to call them every day and communicate. I miss them very much, but I’m glad they are safe, and they don’t need to hide in basements and bomb shelters,” Oleg, who declined to give his surname for security reasons, said from Kyiv.

Ukrainian President Volodymyr Zelensky banned men aged 18 to 60 from leaving the country when Russia invaded, asking them instead to fight for their country, and many LGBTQ+ people have responded to his request.

LGBTQ+ people had been allowed to serve in the military in Ukraine before the war, with the first dedicated battalion founded in 2019 even joining the Kyiv Pride march that year.

Conservative attitudes towards LGBTQ+ equality persist in the central European nation of 43 million people, but Oleg said he had “never encountered a negative attitude” in the Ukrainian capital as an openly LGBTQ+ person. 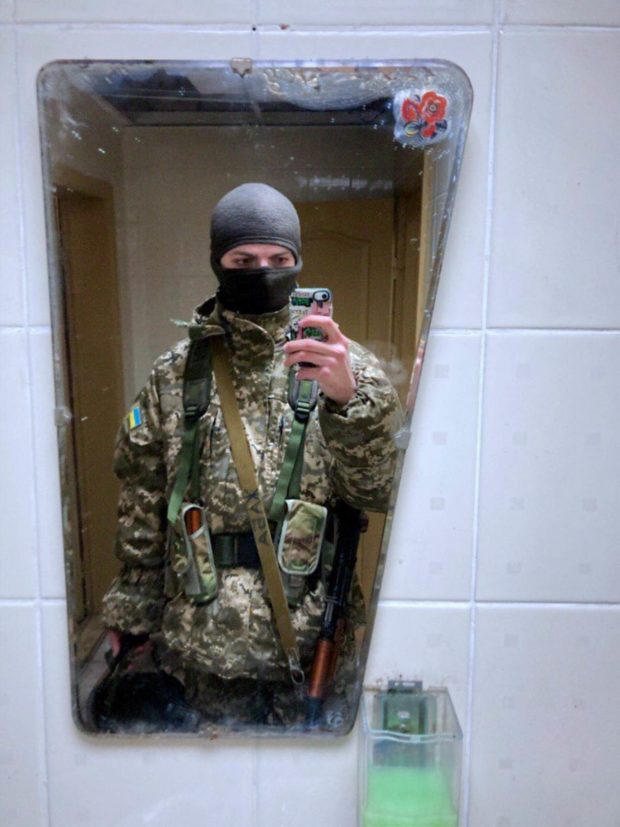 Oleg, a 22-year-old bisexual Ukrainian from Kyiv, took up arms to defend his homeland three days after Russia invaded Ukraine.

Oleg, who came out at the age of 19 and has received the full support of his family, said he felt impelled to fight for his country as an LGBTQ+ person because he feared “Russian repression”.

Dmytro, a translator from Bila Tserkva, a city in central Ukraine, was planning to attend a rave the day after Russia invaded.

Instead, the non-binary 23-year-old – who identifies neither as male nor female – joined Ukraine’s territorial defence force, the military reserve of the country’s armed forces.

“I didn’t want to go into the army, but then all of this went down, and I volunteered,” said Dmytro, who also asked for his surname not to be used for security reasons.

Before the war, Dmytro worked in a dubbing studio. Now, he wakes at 6 a.m. to exercise, take tactics training and learn to shoot.

As soon as he was allowed a few hours off, he got a customised tattoo of the Ukrainian coat of arms.

“I don’t have days of the week anymore,” Dmytro said. “We just count days of war.”

Ukraine legalised gay sex in 1991, but conservative elements in the mainly Orthodox Christian nation often speak out against rights for LGBTQ+ people, and members of the far-right regularly target groups and events linked to the community.

Still, Oleg said he preferred to be discreet about his sexuality, wary about encountering negative attitudes from older fellow soldiers. 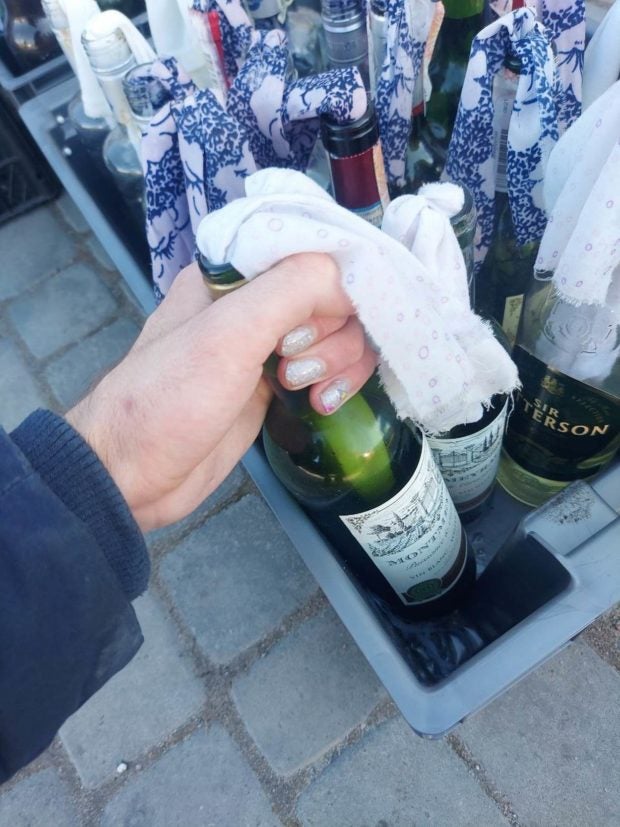 Dmytro, a 23-year-old non-binary translator from Bila Tserkva, holds a Molotov cocktail while he shows his sparkly white glitter fingernails while serving at the Ukrainian territorial defence forces.

“We live and sleep in a small room,” he said. “I don’t want to risk being isolated.”

Homophobic groups and individuals have also joined the Ukrainian army, said Lenny Emson, director of Kyiv Pride, an LGBTQ+ rights group based in the capital.

“We’ve received messages from far-right groups calling us undercover agents and telling us to flee the country, blaming us for not doing anything for Ukraine,” Emson said.

In Bila Tserkva, Dmytro did not bother to remove the glittery white polish from his fingernails.

“One of the instructors, when he noticed my nails at first, told me: ‘I hope you are just an aesthetic person’,” Dmytro said, meaning artistic rather than gay.

“But then he added: ‘Actually, I don’t care whoever you are. You are here to kill the invader, that’s what matters.'”

Six same-sex soldier couples have got engaged since the war began – some hoping gay marriage will soon be legalised, according to the Union of the LGBT Military.

But some doubt whether signs of growing acceptance will outlast the conflict.

“When the war is over, I think we will have to fight for human rights again,” Vladislav, a 25-year-old gay soldier, told the Thomson Reuters Foundation from Kyiv.

Ukraine ranks 39th in Europe in terms of LGBTQ+ equality, according to advocacy group ILGA-Europe. Even though discrimination in the workplace is banned, same-sex couples cannot marry or adopt children. 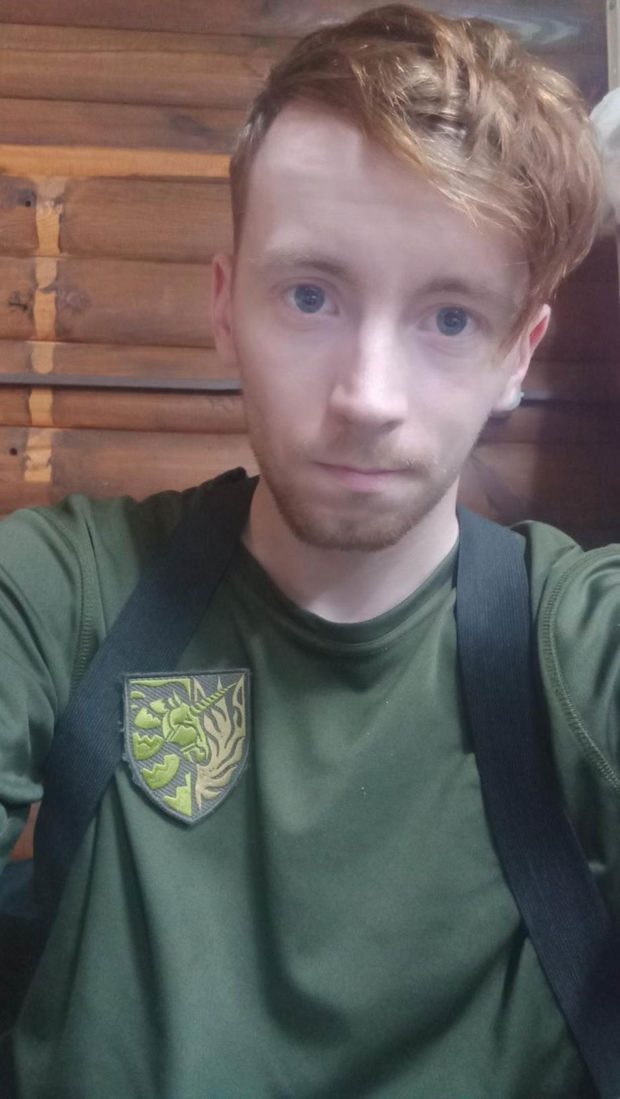 Vlad, a 25-year-old gay soldier in Kyiv, poses with the symbol of the first group of Ukrainian LGBTQ+ soldiers.

Russia, where a law against “gay propaganda” has been used to ban Pride marches and detain activists, ranks 46th in Europe for LGBTQ+ legal protections, according to the ILGA-Europe survey.

Prior to the Russian assault, foreign news organisations quoted unnamed U.S. officials who said Moscow had drawn up a “kill list” of critics, including journalists and activists – LGBTQ+ people among them.

“If there is no more Ukraine, then there will be repression. People will be killed and the LGBTQ+ witch-hunt will begin,” said Vladislav.

Borys, a 26-year-old former paramedic who asked for his surname not to be used, said he preferred to focus on the present for now.

“First, we have to win the war … And then you can call me again and we’ll speak about the future.”

Russian artist and Ukrainian in Bali collaborate on message of unity