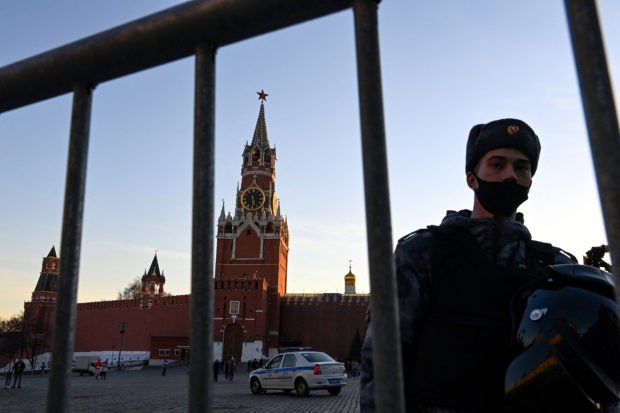 A Russian serviceman guards at Red Square in front of the Kremlin in central Moscow on March 2, 2022. AFP FILE PHOTO

Russia has told its academics to avoid scientific conferences abroad this year, the science and higher education ministry said on Monday, as Moscow finds itself increasingly isolated over its military campaign in Ukraine.

The ministry said it had also decided to suspend the indexation of work by Russian scholars in international databases until the end of the year.

“We are not calling for abandoning publications in Web of Science and Scopus (academic resources),” Minister Valery Falkov said in a statement. “Russia must remain on the frontier of global science. But we need to act in accordance with our national interests.”

Russia sent tens of thousands of troops into Ukraine on Feb. 24 in what it called a special operation to degrade its southern neighbour’s military capabilities and root out people it called dangerous nationalists.

Ukrainian forces have mounted stiff resistance, and the West has imposed sweeping sanctions on Russia in an effort to force it to withdraw its troops.

Russia in recent years has tried to reduce its dependency on Western technology for its economic and industrial needs. But meagre resources and bureaucratic red tape have often hampered scientific development in the country.

Russian scientists who regularly exchange information with their foreign counterparts face scrutiny from the authorities. Several have been charged with treason after being accused of allegedly handing sensitive material to foreigners.

Ukraine president says any compromises with Russia will require a referendum