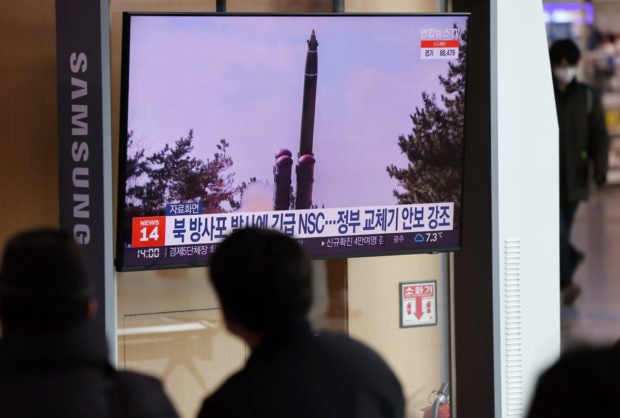 This photo taken Sunday, shows a news report on North Korea’s suspected firing of multiple rocket launcher shots earlier in the day being aired on a television at Seoul Station in central Seoul. | PHOTO: Yonhap via The Korea Herald/Asia News Network

On Sunday, the North fired four suspected shots from its multiple rocket launchers that fell into the Yellow Sea from an unspecified location in South Pyongan Province, according to South Korean military officials.

The North’s official media, including the Korean Central News Agency and the Rodong Sinmun newspaper, did not carry any reports on the firing Monday morning amid a view that it seems to have been part of the nation’s ongoing wintertime military training.

They usually report on major missile launches and new weapons tests, if presumed successful, the next morning.

Meanwhile, Seoul’s Ministry of Unification, which handles inter-Korean affairs, said it will continue efforts for the stable management of the peninsula’s situation and thorough preparations to respond to “all possibilities.”

“(We) once again urge North Korea to immediately stop unilateral actions that create tensions and go counter to the peace and stability of the Korean Peninsula, and to choose the path of dialogue and cooperation that we and the international community have proposed,” ministry spokesperson Lee Jong-joo told a regular press briefing.

She stressed “mutual respect” is the basis for the development of inter-Korean ties, as it has been agreed between the two Koreas several times, answering a question on North Korean propaganda outlets’ criticism of the South.