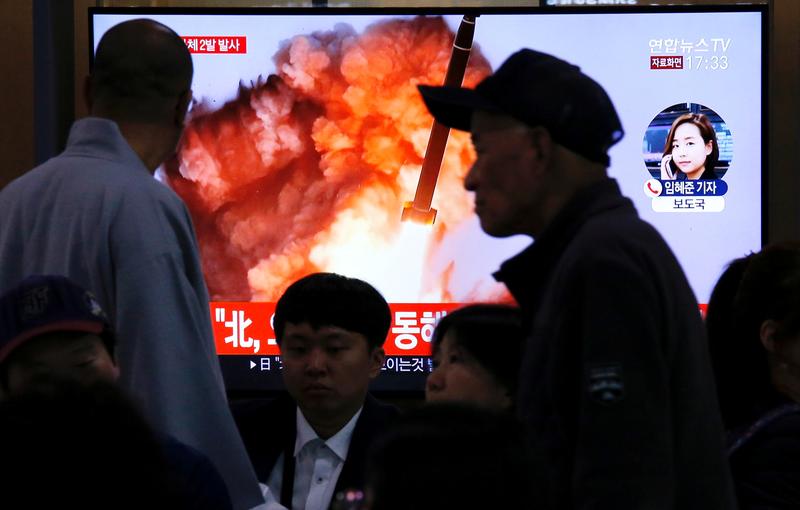 SEOUL — North Korea fired what appeared to be a ballistic missile into the sea on Wednesday, South Korea and Japan said, in the first such launch by Pyongyang this year.

In the decade since Kim Jong Un took power, North Korea has made rapid progress in its military technology at the cost of international sanctions.

The nuclear-armed nation’s first apparent weapons launch of 2022 follows a year of major arms tests despite the severe economic hardship during the coronavirus pandemic.

The South Korean military said the North fired what is “presumed to be a ballistic missile” towards the sea east of the peninsula at around 8:10 am (2310 GMT Tuesday) from Jagang province, which borders China.

After an emergency meeting, South Korea’s national security council “expressed concerns over the launch”, according to a statement by the president’s office.

“It is truly regrettable that North Korea has continuously launched missiles since last year,” he told reporters.

Kishida said the Japanese government was analyzing details, including how many missiles may have been launched.

“There have been no reports of damage to Japanese aircraft and vessels so far,” Japan’s top government spokesman Hirokazu Matsuno told reporters.

“We are continuing analysis, but if it took a normal orbit, it is expected to have travelled about 500 kilometers and fallen outside Japan’s exclusive economic zone.”

The launch followed a speech by Kim last week in which he said North Korea would continue to build up its military capabilities.

“I expect North Korea to continue refining its arsenal as a way to improve its strategic position at a time of political change in the region,” Jean Lee, a senior fellow at the Washington-based Woodrow Wilson International Center, told AFP.

In 2021, North Korea said it successfully tested a new type of submarine-launched ballistic missile, a long-range cruise missile, a train-launched weapon, and what it described as a hypersonic warhead.

The dialogue between Washington and Pyongyang remains stalled, following the collapse of talks between Kim and then-president Donald Trump in 2019.

Under Trump’s successor Joe Biden, the United States has repeatedly declared its willingness to meet North Korean representatives, while saying it will seek denuclearization.

But Pyongyang has so far dismissed the offer, accusing Washington of pursuing “hostile” policies.

At the end of a key meeting of the ruling Workers’ Party last week, Kim did not mention the United States at all.

Instead of the policy positions on diplomacy for which Kim’s New Year statements have been closely watched in recent years, he focused on food security and development in an extensive speech.

But he said Pyongyang would continue to boost its capabilities, keeping in mind “the military environment of the Korean peninsula” and the changing international situation.

“Pyongyang is sending the message to the US that it will not change and therefore Washington must give in,” Shin Beom-chul, a researcher at the Korea Research Institute for National Strategy, told AFP.

North Korea is under multiple sets of international sanctions over its nuclear and ballistic missile programs.

The impoverished nation has also been under a rigid self-imposed coronavirus blockade that has hammered its economy.

The worsening economic situation during the pandemic, however, has not blunted those programs, and North Korea has continued to pursue weapons development, a UN report said in October.

Concerns have grown about a full-blown food crisis in North Korea, and a United Nations human rights expert warned in October that the most vulnerable were “at risk of starvation”.