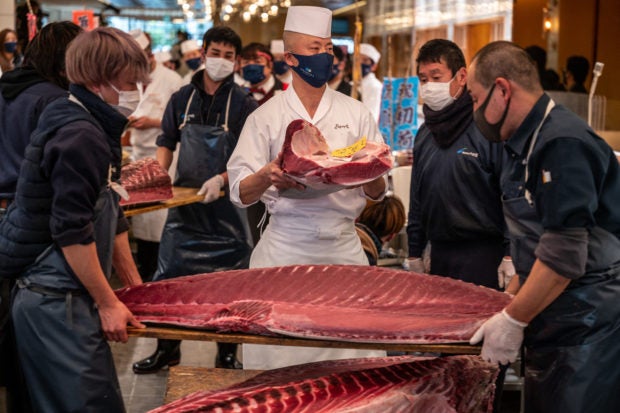 Chef Akifumi Sakagami (C) holds a part of a tuna which was bought jointly by Michelin-starred sushi restaurant operator Onodera Group and wholesaler Yamayuki for 16.9 million yen (145,290 USD) at the Toyosu fish market’s New Year auction, at a restaurant in Tokyo on January 5, 2022. (Photo by Philip FONG / AFP)

Tokyo, Japan — The buyer of a $145,000 tuna at Tokyo’s traditional New Year auction said Wednesday he hoped the purchase would “brighten” a COVID-hit 2022.

The top price paid for a tuna at the first auction of the year at Tokyo’s Toyosu fish market fell for the third year running, with demand hit by the pandemic.

The 16.88 million yen shelled out jointly by a restaurant operator and a wholesaler for the huge bluefin tuna on Wednesday was far below the 2019 record of 333.6 million yen.

The first tuna auction of the year at Toyosu market is a closely watched tradition that draws a horde of fish wholesalers every year.

Bidders sometimes shell out an enormous amount to win the top-priced tuna, which is seen as bringing good luck, as well as plenty of publicity for the buyer.

Hours after the early-morning auction, the prize fish was delivered to a restaurant operated by Onodera in Tokyo’s upscale Omotesando neighborhood to be publicly sliced and filleted.

“I participated in the auction hoping to get the top-priced tuna, which is considered auspicious, and serve it to our customers to brighten their year ahead a little, even as our world remains marred by the pandemic,” head chef Akifumi Sakagami told AFP.

The tuna will be offered to customers both in Japan and at the firm’s restaurants abroad, including in Hawaii, New York, and Los Angeles, he added.

Sushi enthusiasts gathered outside the upscale Tokyo restaurant to await the tuna, eager for a morsel.

Junko Kawabata, 78, said she had jumped on the expressway from her home in eastern Tokyo for the chance to taste the top-priced catch.

“I just love tuna,” she said, proudly displaying a numbered ticket indicating she would be the first customer to be served.