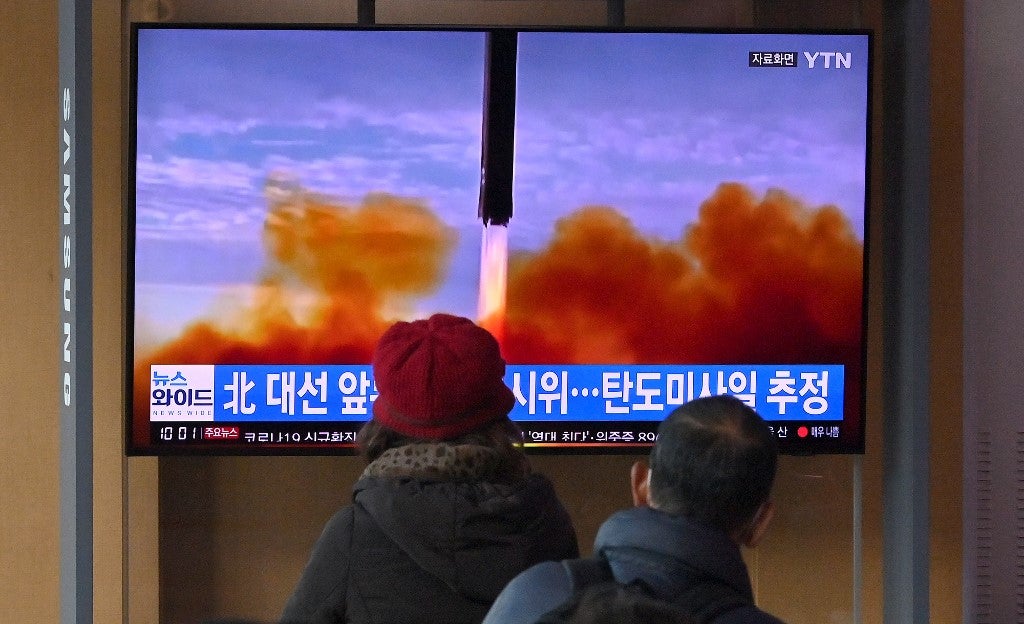 People watch a television screen showing a news broadcast with file footage of a North Korean missile test, at a railway station in Seoul on March 5, 2022, after North Korea fired at least one “unidentified projectile” in the country’s ninth suspected weapons test this year according to the South’s military. (Photo by Jung Yeon-je / AFP)

From hypersonic to medium-range ballistic missiles, Pyongyang test-fired a string of weaponry in January and last week launched what it claimed was a component of a “reconnaissance satellite” — although Seoul described it as another ballistic missile.

Despite biting international sanctions over its nuclear weapons, Pyongyang has ignored US offers of talks since high-profile negotiations between leader Kim Jong Un and then-US president Donald Trump collapsed in 2019.

Instead of diplomacy, Pyongyang has doubled-down on Kim’s drive to modernize its military, warning in January that it could abandon a self-imposed moratorium on testing long-range missiles and nuclear weapons.

South Korea’s military said Saturday it had detected a presumed “ballistic missile launched into the East Sea from the Sunan area around 08:48 am.”

South Korea’s National Security Council condemned Pyongyang’s “unprecedented repeated firing of ballistic missiles”, which goes against peace on the Korean Peninsula and the international community, the presidential Blue House said in a statement.

Seoul will “even more thoroughly monitor North Korea’s nuclear and missile-related facilities, such as Yongbyon and Punggye-ri”, the statement added.

He said the “extremely high frequency” of Pyongyang’s weapons tests this year were “a threat to the region” and were “absolutely unacceptable.”

“Looks like Kim is feeling that Moon did not do much after the Hanoi summit collapsed,” said North Korean studies scholar Ahn Chan-il, referring to the final meeting between Kim and Trump.

Pyongyang has clearly “decided to prioritize their own military agenda regardless of what South Korea thinks,” he added.

Tensions with North Korea are no longer a major issue in South Korean elections, analysts say, with issues including domestic income inequality and youth unemployment top of voters’ lists of concerns.

But if Moon’s ruling Democratic Party loses on Wednesday, it could herald a shift in Seoul’s North Korea policy.

One of the two frontrunners, dour former prosecutor Yoon Suk-yeol of the opposition People Power Party, has threatened a pre-emptive strike on South Korea’s nuclear-armed neighbor if needed.

Analysts had widely predicted Pyongyang would seek to capitalize on the United States’ distraction over Russia’s invasion of Ukraine with more tests.

Ukraine, which emerged from the Cold War with sizeable Soviet-era nuclear weapons stocks of its own, gave up its arsenal in the 1990s.

“With these tests, North Korea seems to be saying North Korea is different from Ukraine, reminding the world that it has its own nuclear weaponry system,” said Yang Moo-jin, a professor at the University of North Korean Studies.

“It’s yet another demand for Washington to abolish the so-called ‘hostile’ policies against Pyongyang,” he told AFP.

North Korea last month accused the United States of being the “root cause of the Ukraine crisis” saying in a statement on its foreign ministry’s website that Washington “meddled” in the internal affairs of other countries when it suited them but condemned legitimate “self-defensive measures”.

Domestically, North Korea is preparing to celebrate the 110th anniversary of the birth of late founder Kim Il Sung in April, which experts say Pyongyang could use as an opportunity to carry out a major weapons test.

Recent satellite images analysed by specialist website 38 North suggest that the country may be preparing a military parade to showcase its weapons to mark the key anniversary.

“Pyongyang is likely to focus on testing its reconnaissance satellites and ICBMs until April,” said Cheong Seong-chang of the Center for North Korea Studies at the Sejong Institute.