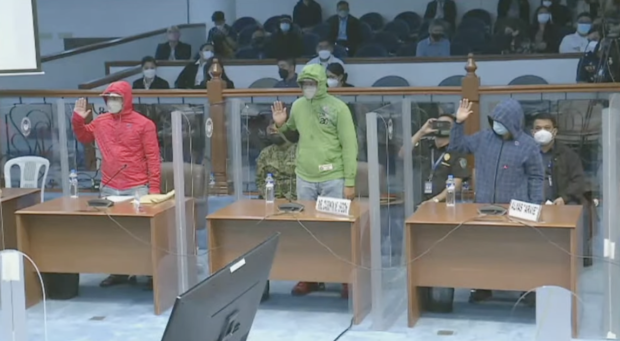 Three witnesses who came forward and linked 8 suspects to the disappearance of six cockfight enthusiasts who went missing last January 2022 take their oath before testifying at the Senate public order committee hearing on Mar. 21, 2022. Screengrab from Senate livestream

During the resumption of the Senate public order committee hearing into the disappearance of over 30 cockfight enthusiasts, CIDG Director Eliseo Cruz said a total of three witnesses came forward and identified eight suspects.

Cruz said kidnapping and serious illegal detention are punishable under Article 268 of the Revised Penal Code was filed against the identified 8 suspects and other John Does before the Department of Justice on Mar. 18.

“Three witnesses surfaced in this case and executed their sworn statements identifying the suspects who are responsible in this case,” Cruz said.

“Based on the sworn statements of a vital witness, he identified six suspects while two other witnesses also identified two other suspects,” he added.

These suspects were linked by witnesses to the disappearance of six cockfight enthusiasts who were last seen at the Manila Arena last Jan. 13. 2022.

To “ensure an airtight case for the prosecution of the suspects,” legal officers from the Philippine National Police (PNP) and CIDG “investigators thoroughly reviewed the sworn statements of the witnesses and other pieces of evidence,” according to Cruz.

The disappearance of the six cockfight players is among the eight cases being handled by the CIDG. These cases involve a total of 34 missing individuals.

Following the “sensational disappearances and abductions involving sabungeros” in Manila, Bulacan, Laguna, and Batangas,” the CIDG created a special investigation task group “to spearhead the investigative efforts of the [PNP] for the successful prosecution of these cases and eventual conviction of the suspects,” the CIDG director told the Senate committee.