Speaking mostly in Filipino with some English mixed in, nine of the candidates expressed their views on “PiliPinas Debates 2022: The Turning Point,” which was organized by the Commission on Elections (Comelec).

“I support it because gasoline is expensive,” Lacson said. “Ka Leody is right. They really have to ask for overtime pay. This will require us to amend the Labor Code for it to be allowed so that workers would not have to demand overtime pay when they go past eight hours.”

“The computation here should not be based on just four days of work,” Robredo said. “Their take-home pay should be commensurate to the number of hours that they work. But I agree that we should be supportive of them in the middle of the rising price of gasoline.”

“I think we’re all in agreement people should not be shortchanged,” Abella said. 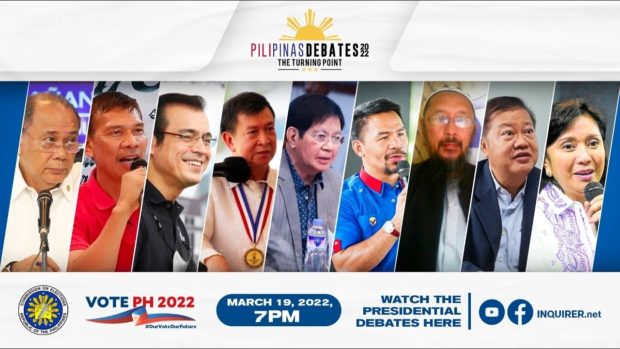 “I think this depends on the industry,” Moreno said. “There are industries that need physical presence to create more productivity, efficiency in production.”

“For me, it’s not for everyone. The work can be done in 10 hours  [per day for four days] if the work is light,” Pacquiao said.

For former Defense Secretary Norberto Gonzales and businessman Faisal Mangondato, the proposal should be reviewed.

“It depends on what the objective is for making it four days. Let’s first look closely why,” Gonzales said.

“We need to study this proposal because everything we do is in accordance with the law,” Mangondato said.

For his part, lawyer and doctor Jose Montemayor Jr. stressed that the economy should be stimulated.

“We have to stimulate our economy by consumption, spending, and fiscal stimulus. When the money does not circulate, it will be stagnant and it will lead to stagflation,” he said.

The four-day workweek was proposed recently by the National Economic and Development Authority as a way to conserve energy amid a spike in oil prices, caused by the Russia-Ukraine war.

According to the Palace, President Rodrigo Duterte will issue his decision on the matter on March 21.