MANILA, Philippines — “Let’s not look for someone who does not want to face us,” Vice President Leni Robredo said, speaking in Filipino, on Saturday during the “PiliPinas Debates 2022” that was conducted by the Commission on Elections (Comelec).

The statement was part of her closing message at the event, which all the presidential candidates, except for former Sen. Ferdinand Marcos Jr., attended. She did not, however, directly refer to Marcos.

“The president that we need is someone who rushes to be with you when. you’re suffering, who is ready to sacrifice to help you, who ready to face anyone to fight for you,” Robredo said.

“So let’s not look for someone who does not want to face us,” she added. “All the time, I’m here, facing you, fighting for you.”

Despite the misinformation directed at her, she said she had proof of the achievements of her office.

“With or without an election, even in a storm, in whatever disaster, pandemic, in whatever problem, I am here,” she said. “Whatever stories they spread about me, the truth is we have complete receipts,” she said.

“True leaders show up and man up. So this coming May, the best man for the job is a woman,” Robredo, the only woman running for the presidency, added. 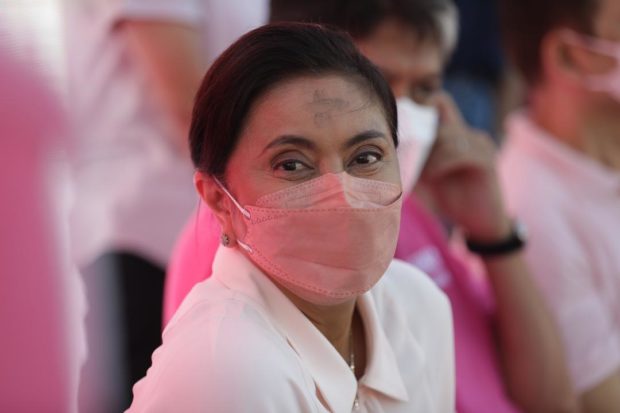 Vice President Leni Robredo at Plaza Noli in Sampaloc, Manila, on Wednesday, March 2, 2022. She was there to celebrate Women’s Month with a crowd of more than 3,000 Manileños – women, youth, LGBTQIA+, and other sectors. The groups also declared their support for her presidential bid. (VP LENI MEDIA BUREAU)

Meanwhile, as the debate was taking place, Marcos was campaigning in Marikina City.

In both the Comelec and CNN Philippines debates, empty podiums were left for him on stage.

According to the latest Pulse Asia survey on presidential preference, Robredo ranks a far second with 15 percent from topnotcher Marcos with 60 percent.

Robredo’s camp remains confident, however, that she still has a chance in the 2022 polls, pointing out that the massive crowd turnout at her rallies had not yet shown up in the survey.