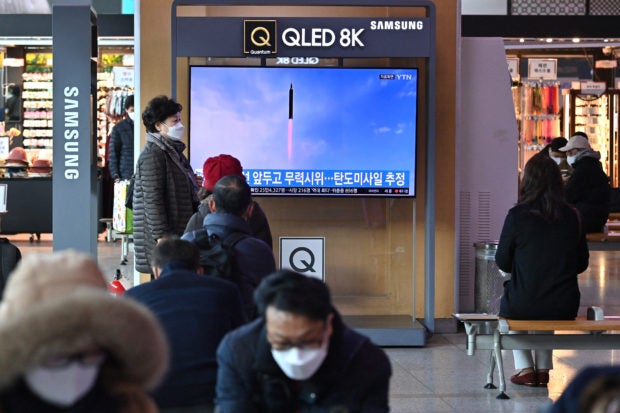 People watch a television screen showing a news broadcast with file footage of a North Korean missile test, at a railway station in Seoul on March 5, 2022, after North Korea fired at least one “unidentified projectile” in the country’s ninth suspected weapons test this year according to the South’s military. AFP

SEOUL — North Korea fired an “unidentified projectile” Wednesday but the launch appears to have immediately failed, Seoul said, after the US said it was ramping up missile defences in response to a record-breaking string of tests.

The failed launch would have been Pyongyang’s tenth weapons test so far this year, following seven missile tests and two of what North Korea said were a “reconnaissance satellite”.

South Korea and the US said last week those tests were actually of a new intercontinental ballistic missile (ICBM) system that has never been launched before — dubbed a “monster missile” by analysts.

“North Korea fired an unknown projectile from the Sunan area around 09:30 today, but it is presumed that it failed immediately after launch,” Seoul’s Joint Chiefs of Staff said in a statement.

The February 27 and March 5 launches were also from the Sunan area in Pyongyang, according to South Korea’s military.

The ministry declined to confirm the reports and there was no warning from the Coast Guard to local vessels, which generally accompanies a North Korean missile launch.

The US this week said it had “increased the intensity” of its missile defence systems in South Korea, as well as conducted a carrier-based air demonstration in the Yellow Sea following the recent North Korean launches.

North Korea has long coveted an ICBM that can carry multiple warheads — the Hwasong-17 which was first unveiled at a parade in October 2020.

It has never been test-fired — but Washington said last week Pyongyang had recently tested parts of it disguised as a satellite.

North Korea is already under biting international sanctions over its missile and nuclear weapons programme but the US said the tests were a “serious escalation” and would be punished.

North Korea has been observing a self-imposed moratorium on testing long range and nuclear weapons, but with talks stalled and sanctions still in place, it seems close to tearing it up.

“With Russia now highly unlikely to agree to additional sanctions on the North in case of such a test-launch amidst its invasion of Ukraine, Pyongyang appears to have judged it was the optimal time to proceed,” Cheong said.

The failure of the Wednesday launch will be closely studied by Pyongyang, and it can take around three tests to ensure the missile is functioning, he added.

“I expect the North to conduct one or two more test-launches before April 15,” he said.

North Korea will mark the 110th anniversary of the birth of founding leader and Kim’s grandfather Kim Il Sung in April and likes to mark key domestic anniversaries with military parades or launches.

Satellite images indicate that North Korea is preparing for a military parade.

A fresh ICBM launch would be an early challenge for South Korea’s new president-elect, Yoon Suk-yeol, who has vowed to take a harder line against the North’s provocations.

Yoon has not ruled out the possibility of dialogue with Pyongyang, but analysts say his hawkish position puts him on a completely different footing to his liberal predecessor and significantly reduces the prospect of substantive engagement.