Seventh journalist killed this year in Mexico as scrutiny mounts 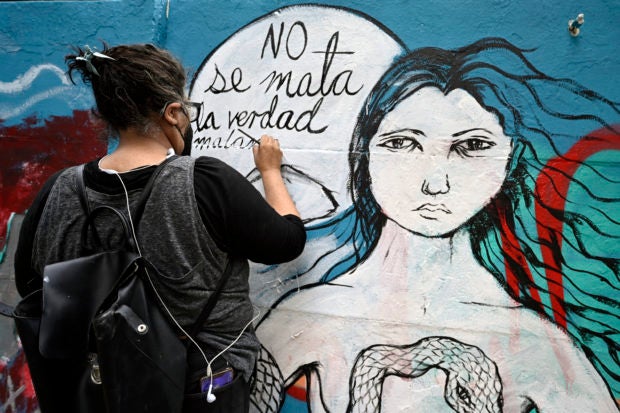 A visual artist writes the phrase “Truth can not be killed” on a wall during a protest against the the murder in Mexico of six journalists since the beginning of the year, in Mexico City, on February 13, 2022. AFP

MEXICO CITY —  The director of a media outlet in a gang-plagued state in western Mexico was shot and killed Tuesday, authorities said, marking the seventh death of a media worker this year in bloodshed that has stirred international concern.

Armando Linares, director of Monitor Michoacan, was shot dead at a house in the city of Zitacuaro in the state of Michoacan, the state attorney general’s office said.

In January, Roberto Toledo, another worker at the same media outlet as Linares, was also killed by gunmen. read more

Announcing Toledo’s death at the time on social media, Linares said the news outlet had been receiving threats as a result of its reporting on corruption in local government.

Michoacan has long been convulsed by turf wars between powerful gangs battling for control of the market for illicit drugs.

Linares had received threats before his death, according to a journalist who declined to be named.

Lawmakers from both the United States and Europe have called on Mexico to step up protections for journalists.

US embassy ‘dismayed’ over violence against journalists in Mexico