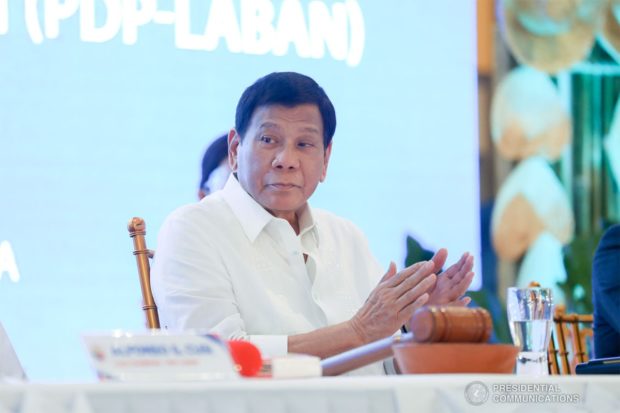 MANILA, Philippines — The faction of ruling party PDP-Laban headed by President Rodrigo Duterte will make a decision on who to endorse as their presidential candidate before March 25, the start of the campaign for local candidates, a key party official said Tuesday.

Acting Cabinet Secretary and PDP-Laban faction Secretary General Melvin Matibag said about 60 to 70% of their local candidates are still waiting for the endorsement of the party and the decision of the President who to support in the May 9 polls.

He admitted that some local leaders have already chosen their own candidates, including its vice president for Visayas, Eastern Samar Governor Ben Evardone who has endorsed the presidency of Vice President Leni Robredo, but, Matibag said,  this is not the stand of the party.

“We will make a decision soon, before the start of the March 25 campaign ng local,” he said in an interview over ABS CBN News Channel.

(It is difficult for our candidates if we as the ruling party don’t have a presidential candidate to endorse.)

He admitted that it would be difficult for their local candidates, as well as their senatorial bets, to campaign if they are not endorsing a presidential candidate.

For the vice presidency, Matibag said that PDP-Laban is unanimous in endorsing Davao City Mayor Sara Duterte-Carpio, the daughter of the president.

However, the party is still going through a process of picking a presidential candidate, that’s why it has not so far endorsed Duterte-Carpio’s running mate, former senator Ferdinand Marcos Jr.

Matibag reiterated that PDP-Laban will support the presidential candidate who will embrace the party’s 11-point agenda which includes the successful programs of the Duterte administration, including the fight against corruption, drugs, criminality and terrorism, and the provision of healthcare to the masses such as the Malasakit Centers, among others.

He said the party may endorse a candidate or may just come up with a standard for voting for a presidential candidate.

Duterte himself has not yet endorsed a presidential candidate, although he had in the past gave hints as to who may succeed him. He, however, said it would be ideal for the country to have a president who is a decisive, compassionate lawyer.