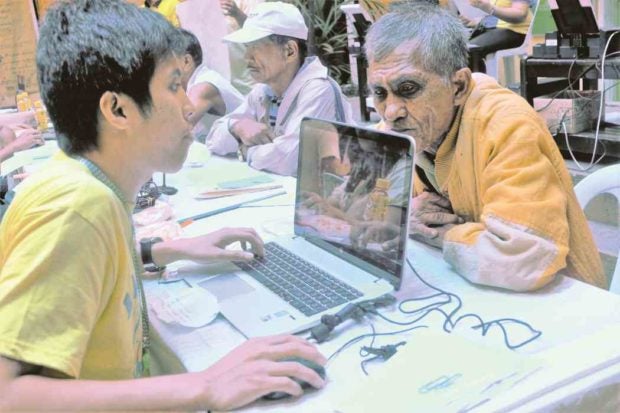 An original agrarian reform beneficiary in the oil palm areas of two towns in Agusan del Sur is being interviewed by a DAR employee. This photo was taken in 2016. (CHRIS V. PANGANIBAN / INQUIRER MINDANAO)

ROSARIO, Agusan del Sur, Philippines — Agrarian reform beneficiaries who are former workers of a big oil palm plantation here will get their individual land titles within a month — or at least, before President Rodrigo Duterte ends his term on June 30.

Agrarian Reform Secretary Bernie Cruz made the assurance at a recent meeting with leaders of three groups of agrarian reform beneficiaries (ARB) established in the former plantation areas of the NDC-Gurthrie Plantations Inc. (NDC-GPI).

The individual titling is part of the Support for Parcelization of Individual Titles (SPLIT) project of the Department of Agrarian Reform (DAR).

The project aims to distribute to individual beneficiaries some 1.38 million hectares. The DAR project is funded by P24 billion from theWorld Bank.

Cruz, who met the ARB leaders at the guest house of oil palm plantation areas in Barangay Maligaya here, said that two weeks ago, the Registry of Deeds (ROD) had already processed the computerized titles for SPLIT beneficiaries in 20 provinces of the country.

He said a total of 3,150 hectares of the oil palm plantation areas would be distributed to 1,143 ARBs in the form of Certificates of Land Ownership Award (CLOAs).

The ARBs belong to the three groups who developed and maintained the former NGPI farmlands after these were turned over to them under the Comprehensive Agrarian Reform Program in 1988.

Then-President Corazon Aquino personally turned over the CLOAs to the farmworkers of the company who formed themselves into the NGPI Multi-Purpose Cooperative (NGPI MPC) on Dec. 12, 1988 in Cagayan de Oro City.

In March 1990, the NGPI MPC, as the collective landowners of the oil palm plantation, entered into a leasehold contract with NGPI, later known as the Filipinas Palmoil Plantation, Inc.

The NGPI  voluntarily turned over the management of the plantation to the cooperative in November 2013 because the latter continued to demand higher rentals for the land.

Infighting among leaders and members of the NGPI MPC, however, led to its split up into three groups that had already positioned and developed their respective areas separately after DAR initially surveyed their areas to prevent further atrocities.